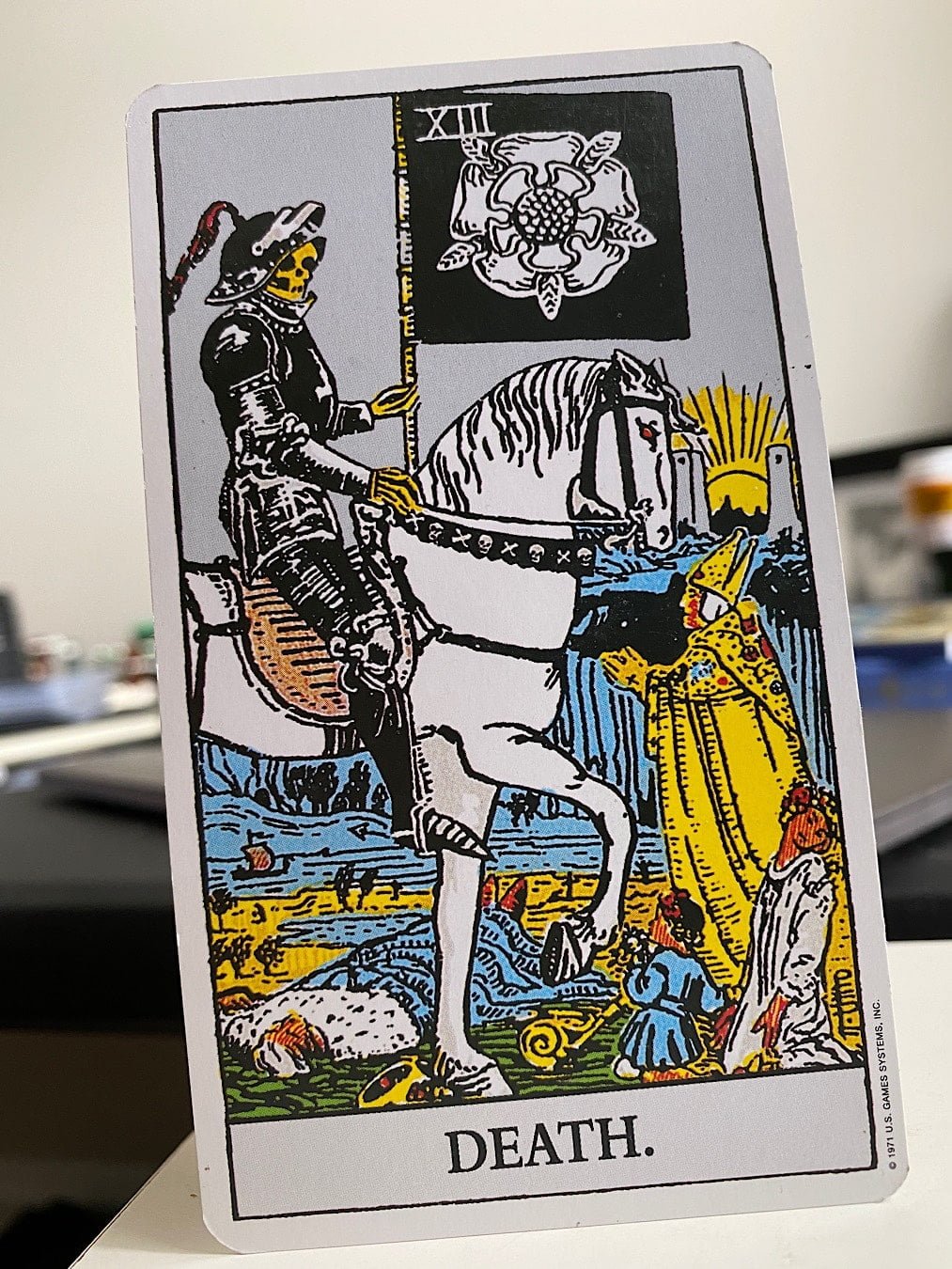 Ruled by Scorpio, ruled by Mars

In the Wait-Smith version, we see death, in black, riding a horse, carrying a flag embroidered with a harvest crown. The Reaper has come to harvest.

The basic meaning is that of rebirth. Just because you die, doesn’t mean you’re dead. For behind the Reaper lies the gates of heaven, and the shining sun. After death, there is a rise of consciousness.

In The Pictorial Key to the Tarot, Waite says,

“There should be no need to point out that the suggestion of death which I have made in connection with the previous card is, of course, to be understood mystically, but this is not the case in the present instance. The natural transit of man to the next stage of his being either is or may be one form of his progress, but the exotic and almost unknown entrance, while still in this life, into the state of mystical death is a change in the form of consciousness and the passage into a state to which ordinary death is neither the path nor gate. The existing occult explanations of the 13th card are, on the whole, better than usual, rebirth, creation, destination, renewal, and the rest.”

Many people are scared to see the Death card in a Tarot reading, for they consider it too literally. But Waite is clear to emphasize that this death is a mystical death, not a literal death.

Thus, Death merely means that you, the old you, will be cleared away by the scalpel of Death so as to make room for the new you, the reborn self of New Consciousness.

Does this mean higher consciousness? Maybe.

But it could also just mean a transformation of perspective, and not necessarily anything esoteric or gnostic.

The Death card is ruled by Scorpio, which is ruled by Mars, a planet of material impulses.

According to Crowley, this card is associated with the Alchemical concept of “putrefication,” which he describes as the process whereby the Cosmic Egg, which is nonbinary or intersex, gives birth to all the gendered gods who then give birth to the Universe.

Crowley says Scorpio is in line with Leo in terms of being one of the most powerful Zodiac signs in the Tarot.

The figure of the Scorpion represents the myth of a creature sacrificing its life when in a desperate situation.

We also see in the card the sign for the Serpent, who is the sacred Lord of Life and Death. The Serpent’s undulations represent the rhythmic balance of Life and Death, creation and dissolution, beginning and end, and ultimately, the process of transformation itself.

In the top of the card we see an Eagle, who represents “exaltation above solid matter.” The Eagle is thus similar to the Phoenix, rising from the dead, echoing the theme of Death in the Scorpion and the Serpent.

The Eagle, Serpent, and Scorpion represent three different levels of involution from the Highest State of the Cosmic Egg down into the Universe.

The card represents the “dance of death,” and with each swipe Death creates bubbles which turn into new forms of Life, another insulation of the dance between Life and Death.

One might see the fish of this card as similar to the Christian Jesus fish, for it represents the doctrines of sacrificial resurrection, the Scorpion killing itself and coming back to Life. Similarly, the Disciples were fishers of men and Jesus performed miracles regarding fish. The Hebrew letter associated with 13 and Death is Nun, meaning “fish.”

For Crowley Death represents the masculine energy of Saturn and his scythe sweeping through the gaseous field of spiritual potential to create the reticular structure of organized matter.