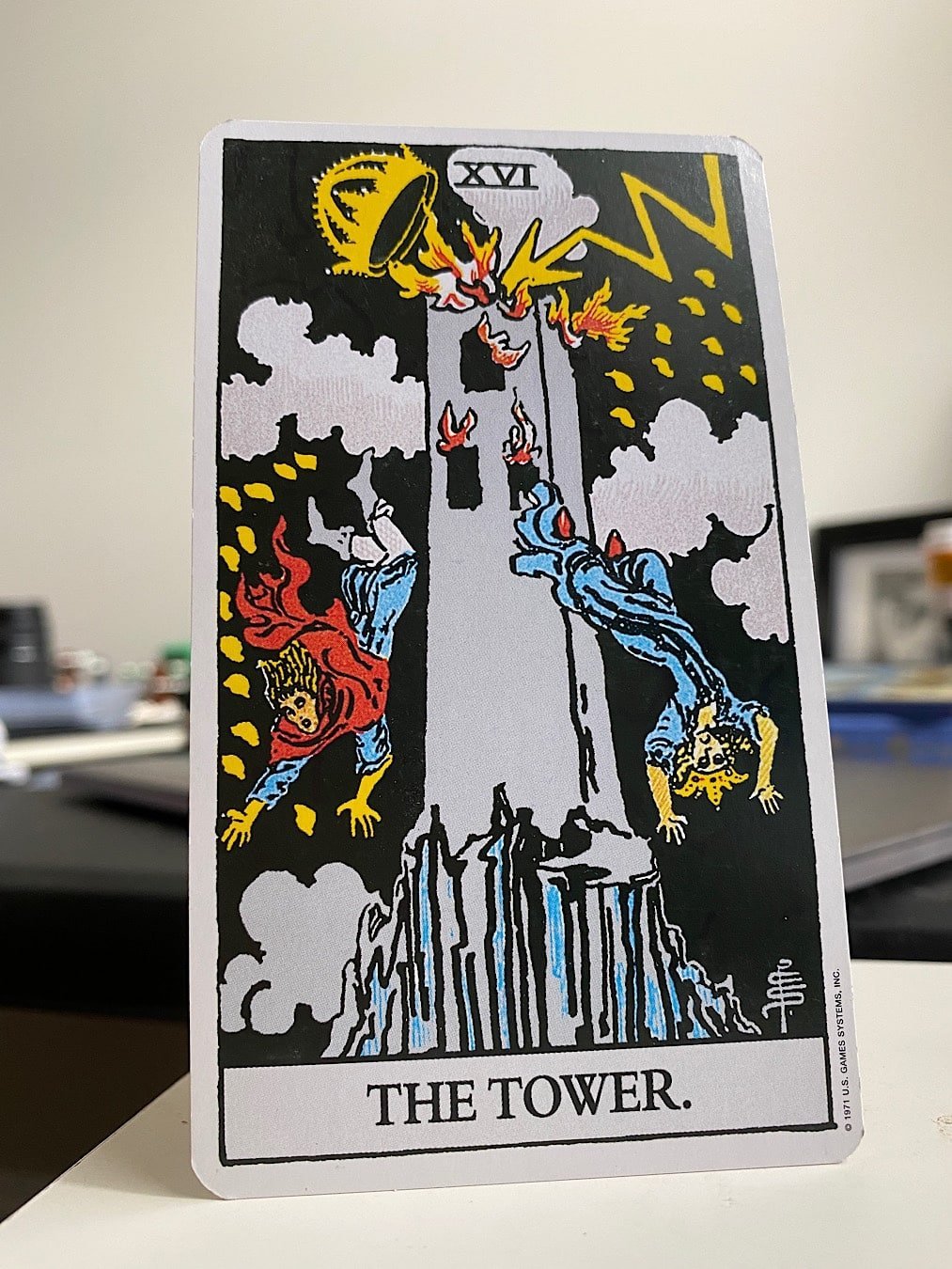 Tarot has a certain “reputation” among people who have mostly learned about it from Hollywood or slumber parties. People are scared of getting their Tarot read or reading for themselves based on a fear of getting a “bad” or “scary” card, such as The Tower, Death, or the 10 of Swords.

From the imagery alone, one might think these fears are justified.

After all, some of the cards just look kind of “scary.”

But is any card in the Tarot truly “bad”? Does getting a certain “bad” Tarot card always mean something negative?

First off, if the Tarot was composed entirely of cards that had 100% positive connotations it would not be nearly as useful when it comes to its power to connect us to our own humanity, or to expose the darker elements of both ourselves, society, and the fate of our lives.

Indeed, a core tenet of Buddhism is that “life is suffering.” Since the Tarot is a reflection of the archetypes of life, it stands to reason that the Tarot would include images that depict suffering.

Take the classic Tower card. Looks pretty scary. There’s lightning, people screaming and falling out of a crumbling tower. Seems bad, right? Like some disaster is right around the corner?

Well, it could merely indicate that you should be cautious with respect to a sudden change in your life. It might even be a good sudden change. But sudden changes can all by themselves induce stress even if they are overall good just because we humans often find security in things staying the same. There is security in stability and any deviation from that can feel like a jolt of lightning. So the Tower can just be a warning to steady yourself and take a deep breath.

Or take the 9 of Swords: 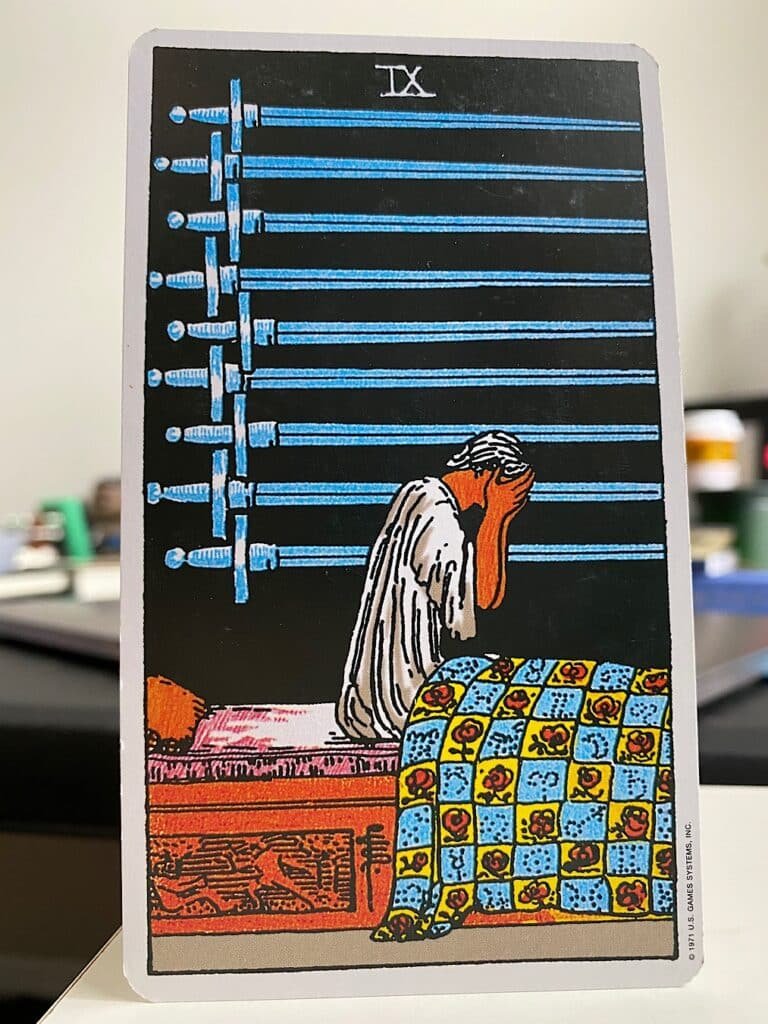 It seems to suggest anguish and pain and anxiety and racing thoughts and being mentally disturbed. It suggests a nervous breakdown of some kind.

Whenever you get cards like this, it’s very important to develop the skill of counterfactual reasoning. The card doesn’t necessarily have to mean, “You will for sure experience anguish,” but rather, could mean “If you don’t change course soon you might experience anguish.”

Or, it might reallynmean “You are experiencing anxiety right now.” But, in my opinion, Tarot readings are supposed to empower you to take action, mental or otherwise. Go ahead and draw a clarifying card to give the anxiety context. Draw more cards to ask for advice. Just be cautious you are not drawing more cards to intentionally turn a negative into a positive, feeding your optimism bias.

In other words, some cards act as warnings or red flags. They say, “Watch out! Danger! Be careful!” instead of “You’re 100% doomed!”

That is to say, the Tarot is rarely about determinism and our fate being sealed. Maybe some people have the ability to successfully predict the future with great confidence, but personally I would be cautious about anyone who is not capable of recognizing their “success” in prediction could be the result of luck. After all, a broken clock is right twice a day.

Another “scary” Tarot card is the 10 of Swords: 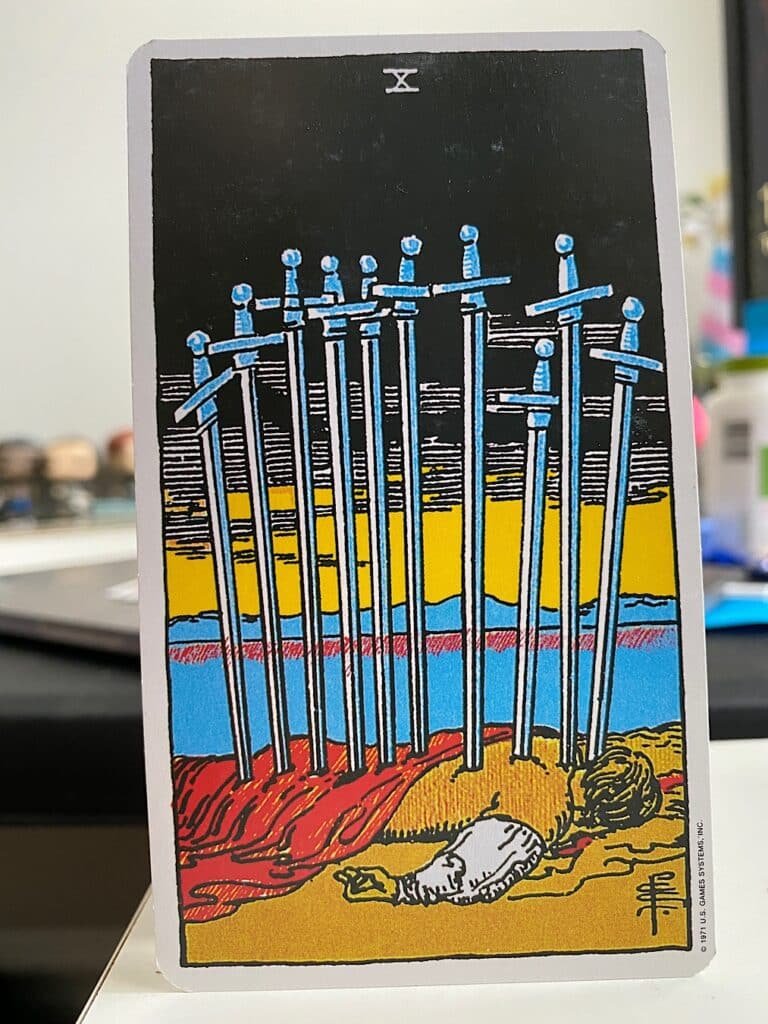 Or…maybe the card just suggests the natural cycle of life and death. All things must come to an end, even good things. But lo! Look towards the horizon: the sun is rising! This is the dharmic cycle of birth and death. When one door closes, another opens. What goes up must come down and vice versa. Birth, death. Black, white. Left, left. Top, bottom. Active, passive. These things are all interconnected.

The is one of the core messages of the Tarot: the cosmos, and thus our lives, happens in waves and cycles. The suit of swords is often considered to be the suit of “troubles.” It makes sense, therefore, that the culminating, final card of the suit would be a card of death. But when we get to the end of the cycle, life does not stay still. We naturally move into another suit, perhaps the Pentacles, which starts with an Ace, and therefore is filled with positivity and possibilities. 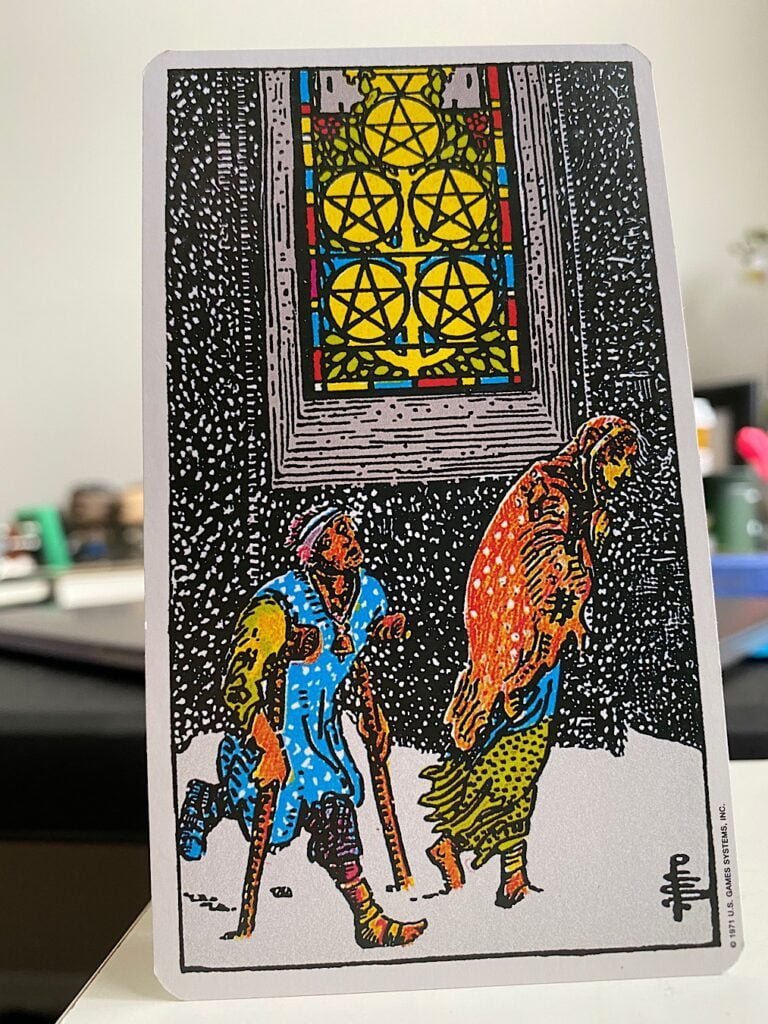 Or perhaps the card is only a warning to tighten your budget. Or maybe it speaks to metaphorical poverty. Like emotional poverty. And while yes, the Pentacles generally concern themselves with “material things,” one must not be so literal 100% of the time. Every single Tarot reading must be placed within the context of your life. A Tarot card does not have meaning outside of this context. So one must be flexible in your interpretations and not beholden to strict interpretations that Pentacles always literally mean real coins, or real money.

One is, of course, free to interpret them that way. But for me, to miss out on the rich forms of metaphor expressed within the Tarot is itself a great form of poverty! 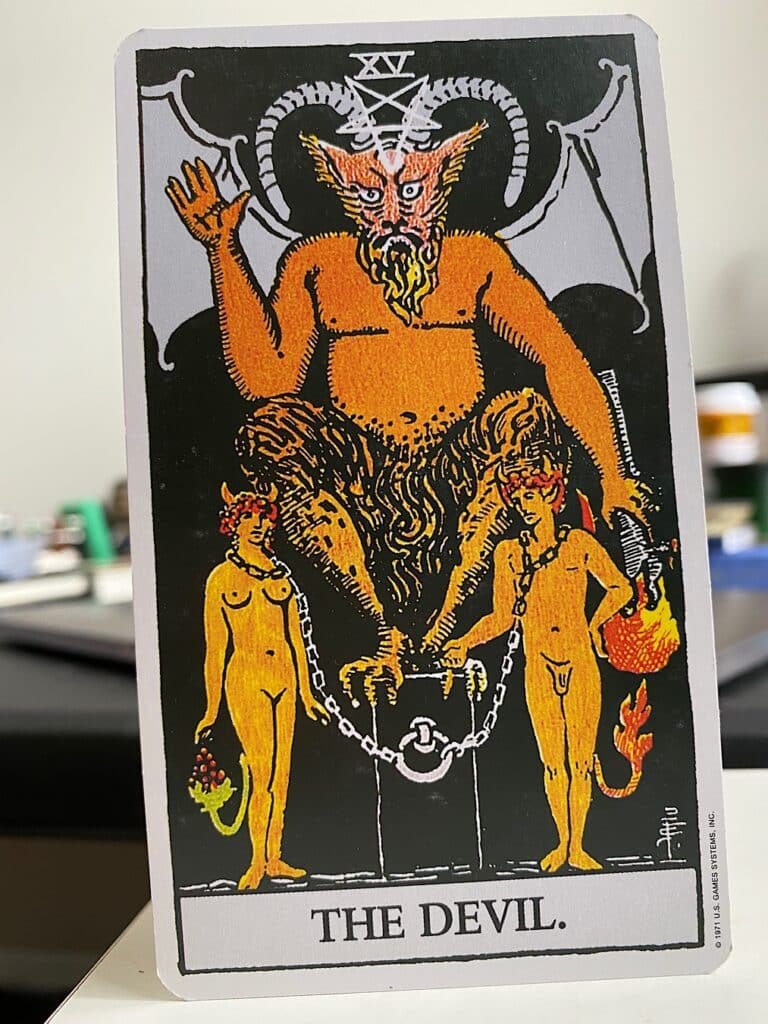 Ahh the Devil! So scary!

But did you know this “Devil” is really the esoteric figure of Baphomet, who represents the occult forces of magic and manifestation and who is not necessarily intent on enslaving you but rather wants to set you free with knowledge and empower you to choose your own desinty? Notice the looseness of the chains around the human figures: it is their own ignorance which keeps them chained.

Furthermore, the Devil is the card of Capricorn, the Goat, which represents ambition, a generally positive emotion!

So this card is not necessarily evil. The devil is in the details, as they say! 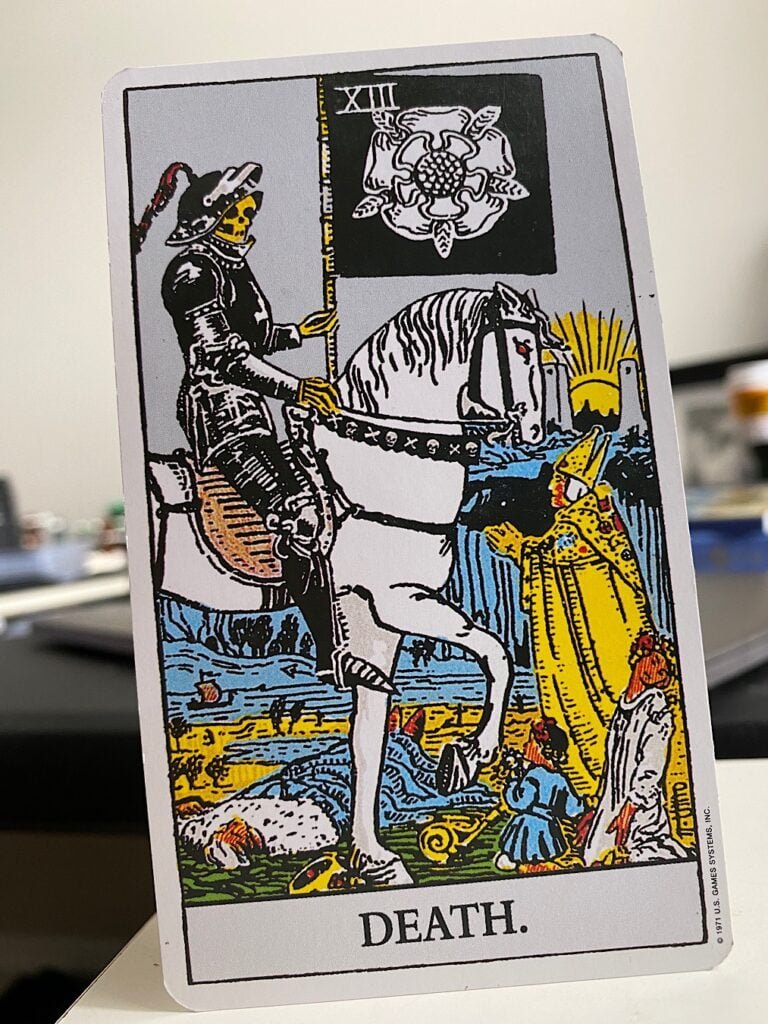 Death. The most feared and misunderstood card in the Tarot.

It rarely (if ever) means actual death. It is the same metaphor death mentioned above with the 10 of Swords. It represents transformation. The dharmic cycle of death and birth. It represents the way in which creativity emerges out of destruction. The way in which the caterpillar has to dissolve before it can turn into a butterfly. Far from being scary, it is a card of hope. A signal of change.

After all, the growth of life out of soil depends on the death of organic matter and the decomposition of life. From death emerges life. That is the nature of regeneration.

So all in all, my view is that there is no such thing as “bad” Tarot cards or “negative” Tarot cards. Which is not to say that the Tower can never mean a negative event is coming your way. It just means that Tarot reading is a fluid process and very much context-dependent. Optimism is a form of magic that can greatly influence the outcome of your Tarot readings as well as your own life. Wield it well and you will be that much more successful.

“…[A]rchetypal psychology holds that the true iconoclast is the image itself which explodes its allegorical meanings, releasing startling new insights. Thus the most distressing images in dreams and fantasies, those we shy from for their disgusting distortion and perversion, are precisely the ones that break the allegorical frame of what we think we know about this person or that, this trait of ourselves or that. The ‘worst’ images are thus the best, for they are the ones that restore a figure to its pristine power as a numinous person at work in the soul.” ~ James Hillman, Re-Visioning Psychology

Can Tarot Cards Ruin Your Life?