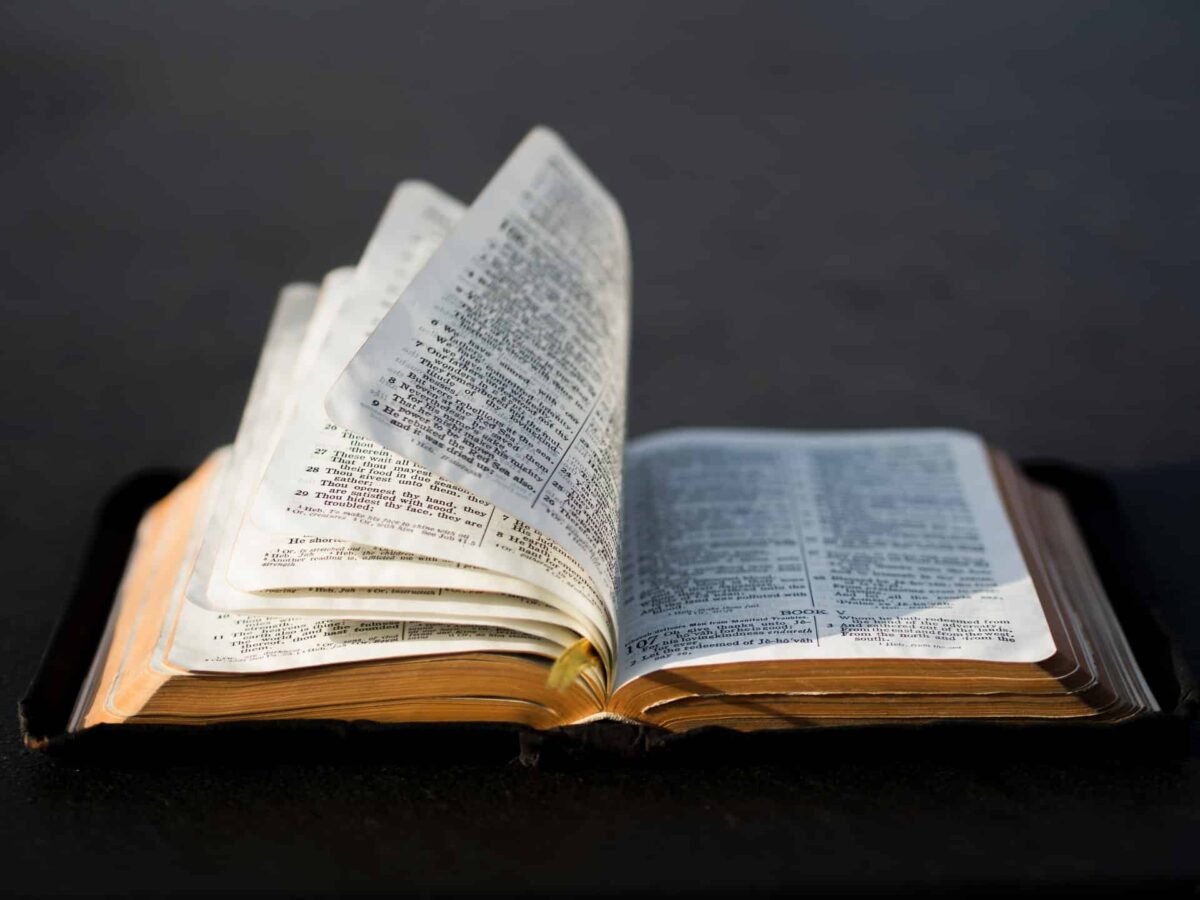 Are there Prohibitions against the Tarot in the Bible?

What does the Bible say about Tarot cards? The Bible actually has many verses that concern the morality of sorcery and divination. In pretty much every context, the Bible seems to say these things are evil and should be avoided. But things are never quite that simple. Consider the following verses, a small selection:

6 If any turn to mediums and wizards, prostituting themselves to them, I will set my face against them, and will cut them off from the people.

31 Do not turn to mediums or wizards; do not seek them out, to be defiled by them: I am the Lord your God.

27 A man or a woman who is a medium or a wizard shall be put to death; they shall be stoned to death, their blood is upon them.

Leviticus 19:26 (NRSV)
26 You shall not eat anything with its blood. You shall not practice augury or witchcraft.
Exodus 22:18 (NRSV)

18 You shall not permit a female sorcerer to live.

Just because you can find Bible verses prohibiting divination does not mean that it’s wrong to read Tarot cards.

Let me say that again: Just because you can single a verse in the Bible prohibiting sorcery and divination does not make it wrong.

Why? Well, the reason is that if you actually read the Old Testament you can find all kind of crazy “laws” and prohibitions that seem, frankly, insane to modern people living under a modern understanding of morality.

If you curse your parents, you shall be put to death

If you work on the Sabbath, you shall be put to death

15 Six days shall work be done, but the seventh day is a sabbath of solemn rest, holy to the Lord; whoever does any work on the sabbath day shall be put to death.

32 When the Israelites were in the wilderness, they found a man gathering sticks on the sabbath day. 33 Those who found him gathering sticks brought him to Moses, Aaron, and to the whole congregation. 34 They put him in custody, because it was not clear what should be done to him. 35 Then the Lord said to Moses, “The man shall be put to death; all the congregation shall stone him outside the camp.” 36 The whole congregation brought him outside the camp and stoned him to death, just as the Lord had commanded Moses.

If you blaspheme against God, you shall be put to death

14 Take the blasphemer outside the camp; and let all who were within hearing lay their hands on his head, and let the whole congregation stone him.

If you commit adultery, you shall be put to death

10 If a man commits adultery with the wife of[a] his neighbor, both the adulterer and the adulteress shall be put to death.

Charging interest on a loan is punishable by death

13 takes advance or accrued interest; shall he then live? He shall not. He has done all these abominable things; he shall surely die; his blood shall be upon himself.

If a man is fighting another man, and the wife intervenes and touches his genitals, her hand is to cut off

11 If men get into a fight with one another, and the wife of one intervenes to rescue her husband from the grip of his opponent by reaching out and seizing his genitals, 12 you shall cut off her hand; show no pity.

Touching or sitting where a menstruating woman sits is unclean

Do any of these rules apply to modern Christians in the 21st century? No!
Our common-sense morality tells us these rules are obviously immoral and should not be followed.
But why then are they in the BIble?
I am no Bibilical scholar or expert in these matters, but I do know that all of these seemingly crazy rules were developed within the context of the Jewish people and their “covenant” with the Jewish God, Yahweh.
I will say no more about it, because I am sure the long tradition of Jewish commentary and scholarly of the Old Testament has a lot more nuance than I am capable of articulating.
But the crucial point is that unless you are Jewish, if you read a “rule” in the Old Testament that seems wildly immoral to you, then the obvious thing to do is not follow the law as if it’s a literal commandment from an Almighty God (Yes, this also applies to “laws” about being gay.)
And if you are Jewish, then consult your local Rabbit because I am sure there is some important context for how to properly interpret these verses and make sense of them in a modern context.
And obviously, there is diversity of opinion even within the Jewish community.
So, basically, use your common-sense moral intuition. This moral intuition is a human thing. Not a Christian or Jewish thing. Our morality comes a combination of human evolution under the pressures of having to living together as social creatures in a tribe as well as from reason. Use your reason! Use your empathy!
Does it seem right to you that someone should be stoned to death for picking up sticks on a Sunday? I hope the answer is an emphatic “no.”
Similarly, when evaluating the prohibitions against divination and magic we have to understand the historical context and first and foremost use our common-sense, modern, human moral intuition to evaluate the moral prohibitions of an ancient book written over 2000 years ago.

But the New Testament also speaks about magic!

Yes, this is absolutely true. The New Testament does speak about magic, sorcery, and divination. And it speaks of them in a mostly negative light. But there are several points to consider here:

You see, Christianity is not an alternative to “magic” – it is a form of magic.

If you have any doubt, consider the Christian ritual practice of partaking in the Eucharist.

The Christian sacrament is, at its heart, a necromantic practice of ceremonial ritual magic whereby a Christian priest uses invocations to bless bread and wine, transforming them into the literal blood and flesh of a god who has been raised from the dead, all while burning candles, incense, chanting, and reading from sacred texts.

If that is not sorcery, I don’t know what is!

And as I argue in my post about whether it’s possible for Christians to also be pagans, Jesus himself is best understood as a magician in his own right.

One of the earliest artistic depictions of Jesus shows him holding a magic wand: 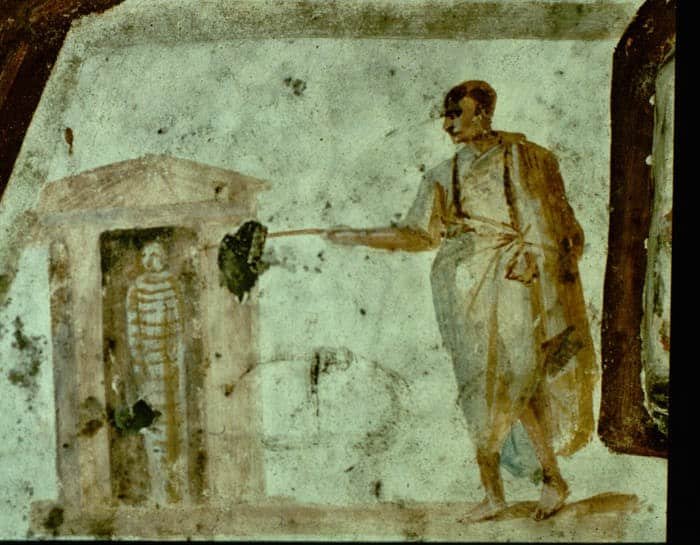 During Jesus’ time in the Greco-Roman era, magic was widely practiced. If we reexamine the Gospels in light of this historical fact, we can begin to see Jesus’ “miracles” as acts of magic.

In fact, the New Testament does not dispute that non-Christian magicians were effective in magic; it just sees them as “competition” essentially. Consider the famous Simon the Magus:

9 Now a certain man named Simon had previously practiced magic in the city and amazed the people of Samaria, saying that he was someone great. 10 All of them, from the least to the greatest, listened to him eagerly, saying, “This man is the power of God that is called Great.” 11 And they listened eagerly to him because for a long time he had amazed them with his magic.

So, the Bible does not dispute the reality of magic. It just says that THEIR prophet was a more powerful magician. Consider the “miracles” of Jesus as successful acts of magic:

Manipulating nature, performing healing spells, engaging in necromancy – that sounds like magic to me.

In my opinion, no it does not. Magic is the birthright of all humans and Christianity does not have exclusive jurisdiction on it.

The same thing applies to Tarot.

With that said, I also want to acknowledge that not everyone sees Tarot as “magical.” There are many Tarot readers who take a secular approach to the Tarot and would not consider it an example of sorcery or divination. Instead, they would see it as just a kind of archetypal Rorschach inkblot that allows you to better practice introspection and inspire creativity.

And there’s nothing wrong with that view. I am sympathetic to it myself.

But I want to explicitly make room for the Christians out there who do think of Tarot as “magical” in some way and are concerned that their Holy Book outlaws the practice of Tarot and magic.

Let me be clear: the Bible only prohibits the Tarot if you choose to interpret it that way, but that is not the only valid interpretation of the Bible.

Indeed, one might think Christianity and the occult are not mutually exclusive belief systems. There are many occultists who consider themselves Christians and vice versa.

Do not let anyone tell you how to define your own religious or spiritual practice. Not your pastor. Not your priest. Not your parents. Not your Sunday school teacher. Not me.

If you want to read Tarot, read Tarot. Experiment. See for yourself whether it improves your life or not. I can guarantee a portal to hell won’t open. At the end of the day, they’re just cardboard cards with pictures on them.