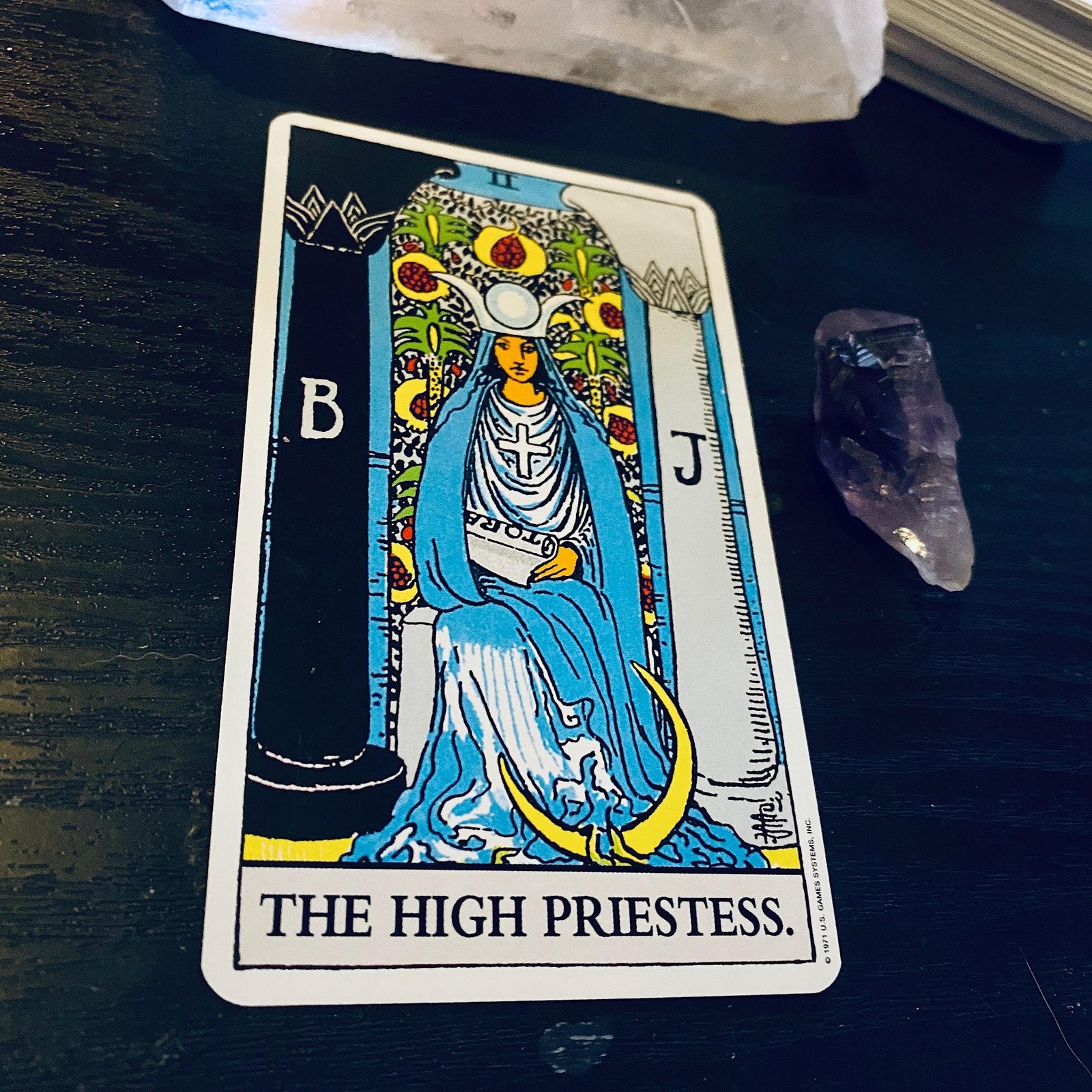 The RWS High Priestess wears the crown the Isis, a symbol of the moon, which suggests the triplicity of the moon phases; this symbolism has long been associated with the feminine, as we can see in the widespread motif of the “triple goddess,” from Hekate to modern Wicca.

The High Priestess sits between the two columns of the Temple of Solomon,  Boaz and Jachin, which stood at the entrance to the temple. They correspond to the two Pillars on the side of the Tree of Life, one under feminine Binah on the Left (Boaz, the Pillar of Severity) and the other under the masculine Chokmah on the Right (Jachin, the Pillar of Mercy).

In the Tree of Life, the High Priestess traditionally represents the Path between the Middle column (Pillar of Harmony or Mildness) going from Kether in the Supernal Triad to the center, Tiphareth, which represents beauty and perfection. Tiphareth is sometimes called the “Christ-center” in Christian Qabalah and we see this represented in the RWS High Priestess with the cross in the middle of her person. This is a representation for how the High Priestess, like her counterpart the Magician, is able to receive the influence from the Divine Realm and channel it into energies below the Abyss in the Tree of Life.

In the RWS we can also see the structure of the Tree of Life in the fruits displayed on a curtain behind the High Priestess, with the Supernal Triad behind her head. These fruits are of course pomegranates, the fruit that Hades used to trick Persephone to become trapped in the Underworld for half the year. The High Priestess is thus a personification of Persephone, daughter of Demeter Goddess of Grains, Vegetation, and the Underworld, who provides a guiding light to the lost Souls in the Afterlife.

I’ve always seen the High Priestess as the embodiment of goddesses of magick such as Isis and Freyje. She is the archetypal witch. She is your own personal spirit guide who will empower your magickal practice if only you call upon her and listen for her wisdom. With her association with the Moon she is also a symbol for the power of Yesod, a symbol for astral consciousness and our connection to higher planes of reality.

In the RWS Tarot the wrinkles of the High Priestess’ blue robes turn into ripples that become a river, in which we see a reflection of the feminine Moon. This feminine form of manifestation is arguably the rivers and waters we see in the background of many Tarot cards through the RWS deck.

“The curtain represents the ‘veil’ over the occult secrets of existence. But look carefully at the Rider image. We actually can see between the pillars and the curtain, and when we do we discovery no great temple, no ancient documents, no opening to the other world. Instead we just find water – formless, serene, fathomless. The ultimate mystery.” ~ Rachel Pollack, Tarot Wisdom

Association: Artemis: The Virgin, the Huntress, the Goddess of forest and hills, followed by a deer

The Priestess is Ruled by the Moon. In the traditional Tree of Life the Priestess represents the Path along the Middle Pillar from Kether to the center, the Sun, Tiphareth.

“The High Priestess is the first card which connects the Supernal Triad with the Hexad; and her path, as shown in diagram, makes a direct connection between the Father in his highest aspect, and the Son in his most perfect manifestation.” (Book of Thoth, p. 72)

We see this process of manifestation in the geometry of the card as the geometrical lattice pattern radiates from her Crown down into the reticulated structure of the everyday world. In this sense she is the feminine complement to the Magician, making manifest the Will of God with her magickal instrument, the Bow of Diana. We see a camel, a symbol of long journeys. But this is a journey of the Soul, a spiritual journey. Instead of water stored in the hump, the High Priestess stores the divine energy she has received in the Supernal Realm as she makes her way down below the Abyss into the realm of creation.

At the bottom, we also see the fruits of the spirit, the life giving spiritual sustenance that is manifested from the Supernal Realm. With her powers of manifestation, she creates all we need to sustain ourselves in this long journey through the Tree of Life.

As Crowley says, “The card represents the most spiritual form of Isis the Eternal Virgin; the Artemis of the Greeks.” (Book of Thoth, p. 73)

Traditionally, Artemis has been associated with Demeter and Persephone, thus providing a symbolic linkage between the RWS High Priestess and the Thoth Priestess, for they both use the same mythological symbology to portray the symbol of the magickal and intuitive Virgin Goddess/Mother. We should remind ourselves that as a symbol for the Virgin Mary, she gave birth to Christ herself, which we see in her connection between Kether and Tiphareth, the Christ-center.

She is clothed in Pure Light, which shields us from the Divine Brilliance of her Supernal nature.

This Veil of Light is a Negative Veil of Nothing, the infinite beyond Oneness that contains all potential.

In Crowley’s system, she is Nuith, the infinite lattice out of which emerges points of manifestation. She is the fertile soil for any concrete idea.

In the card we can literally see concrete objects coming to actualize out of this geometrical potential.

The Tarot Guide – The High Priestess