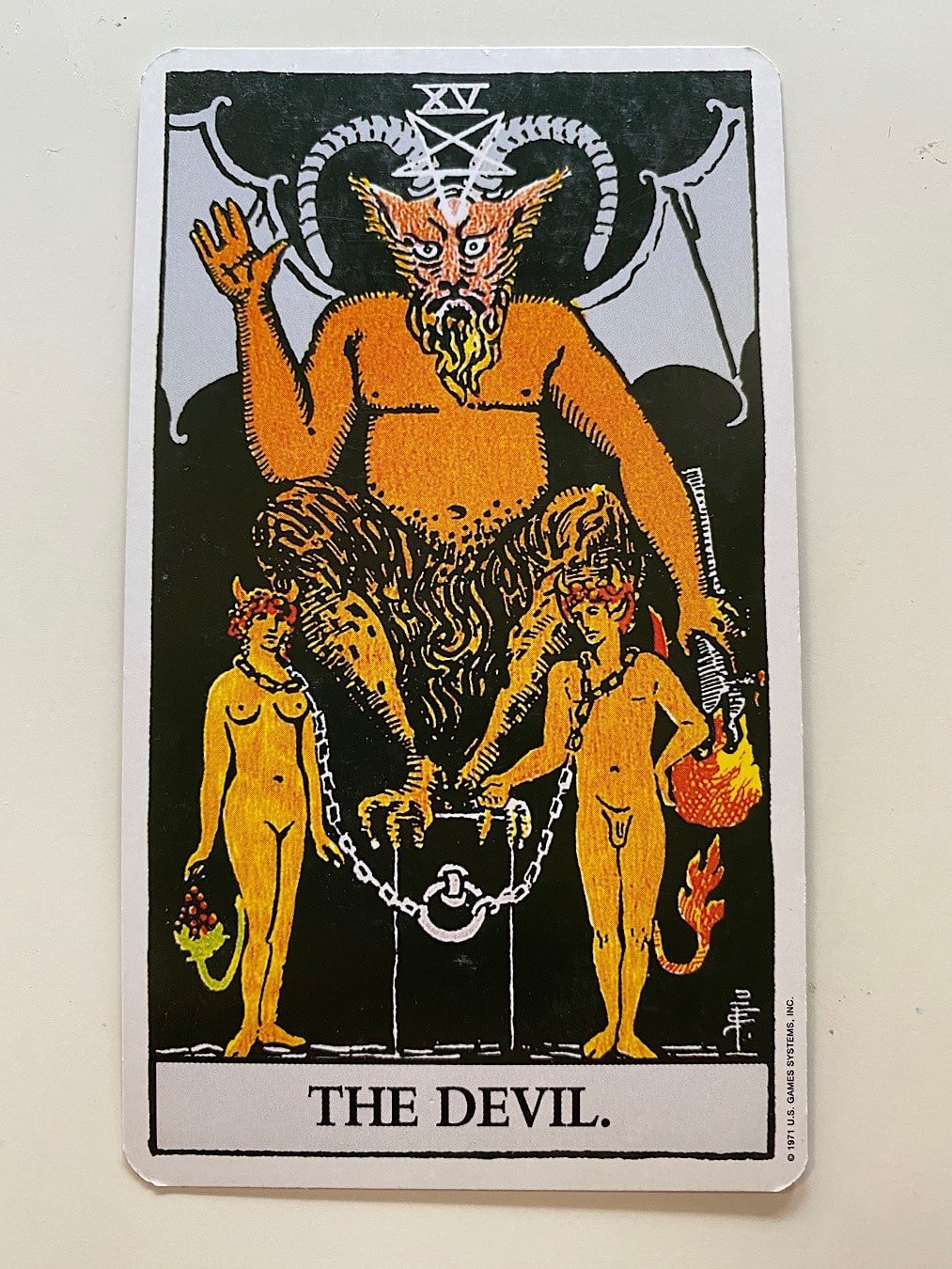 Capricorn is ruled by Saturn. Saturn is limiting, like an anchor around your feet, holding you down as you strive to swim to the surface where you can breathe.

Capricorn is Earth. So the Devil is Earth held back, representing our material life as held back. Despite our material efforts and hard work, we are getting nowhere. The Devil is thus similar to the Seven of Pentacles, which is Taurus (also Earth) held back by Saturn.

This explains why in the Waite-Smith Tarot the Devil is seen as holding the chains weighted around the neck of two human beings. But careful attention attests these chains are easy to slip, so the restriction of Saturn is merely self-imposed. If Material Forms can escape from temptation and vice, they can be self-actualized, that is to say, fully realized as human individuals.

In the Rider-Waite-Smith, we can see the influence of Éliphas Lévi and his conception of Baphomet: 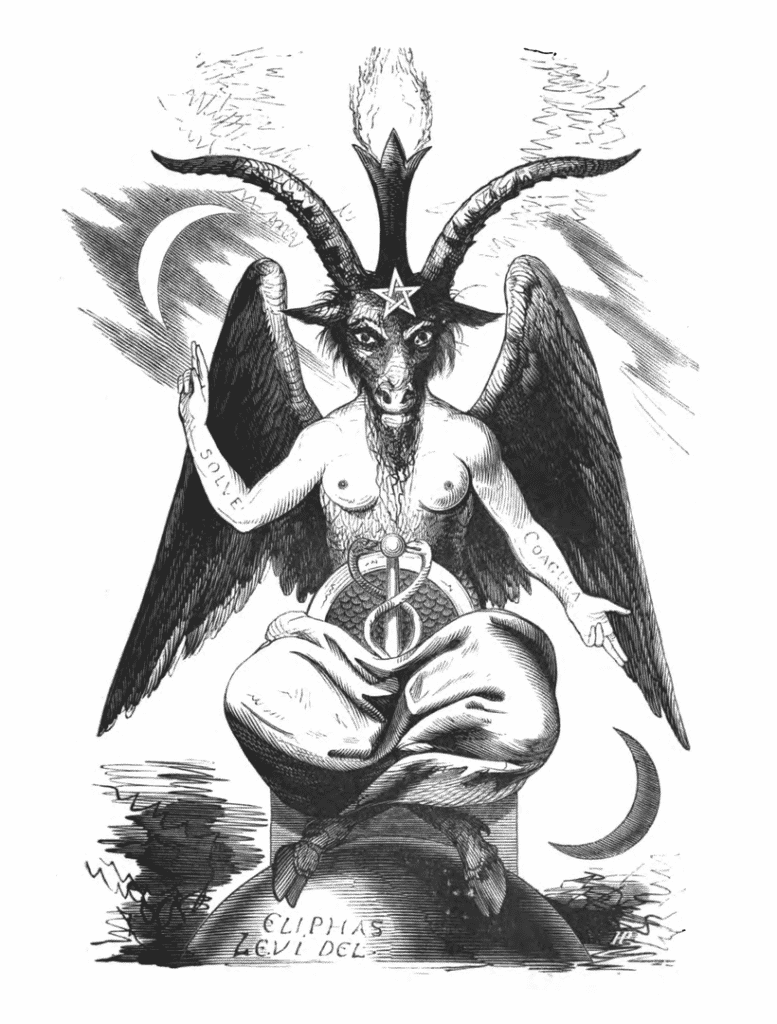 According to this conception of The Devil, Baphomet is an androgynous figure that represents the Hermetic principle of harmoniously balancing the alchemical opposites of masculine and feminine energy. We can see this hermetic influence with the caduceus in his lap, a phallic symbol, as well his breasts. On his arms is written the Latin phrase “Solve Coagula,” which means “dissolve and coagulate.”

In psychoanalytic/alchemical terms this represents the process of Ego dissolving its artificial walls to create a super-concentrated solution out of which new lines of flight materialize. 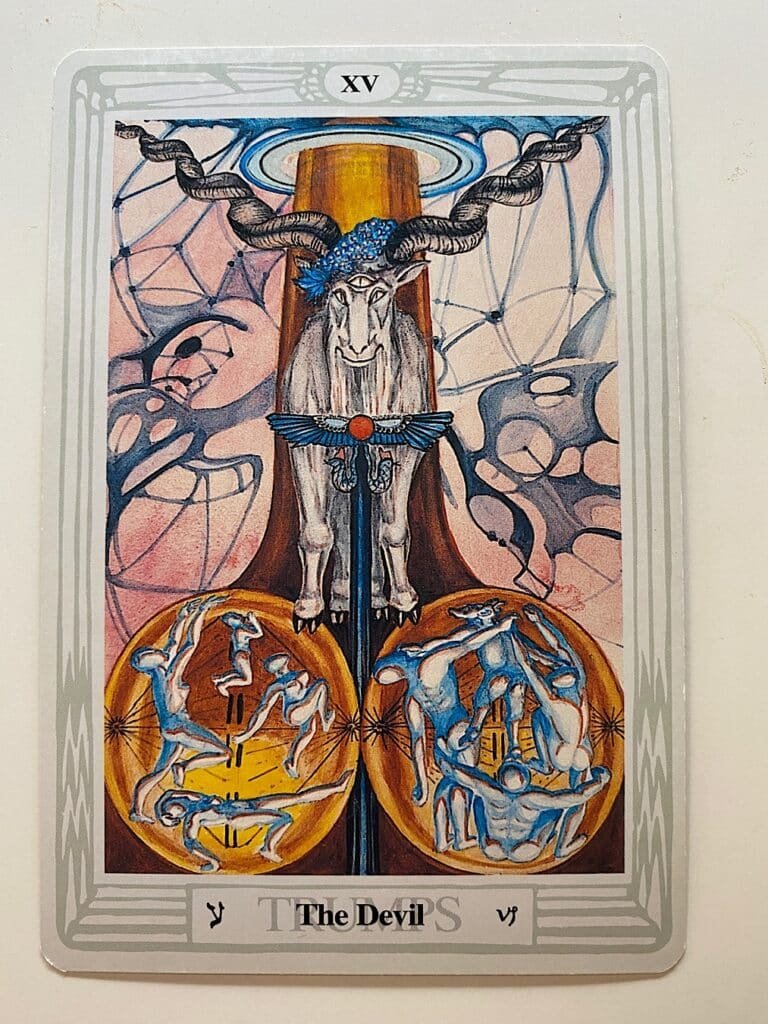 This card represents Baphomet, or, Pan, “creative energy in its most material form,” as Crowley says. The goat of Capricorn ascends to the tops of the barren mountains, where the cults and worship of the Witches took place. Ruled by Saturn, it refers to the Witches’ Sabbath, “Saturn’s day.”

Moreover, Crowley says, “This card represents creative energy in its most material form; in the Zodiac, Capricornus occupies the Zenith. It is the most exalted of the signs; it is the goat leaping with lust upon the summits of earth. The sign is ruled by Saturn, who makes for selfhood and perpetuity. In this sign, Mars is exalted, showing in its best form the fiery, material energy of creation. The card represents Pan Pangenetor, the All-Begetter. It is the Tree of Life as seen against a background of the exquisitely tenuous, complex, and fantastic forms of madness, the divine madness of spring, already foreseen in the meditative madness of winter; for the Sun turns northwards on entering this sign.”

Pan is known in Wicca as the Great Horned God. The God of Spring, who is full of Life and Lust.