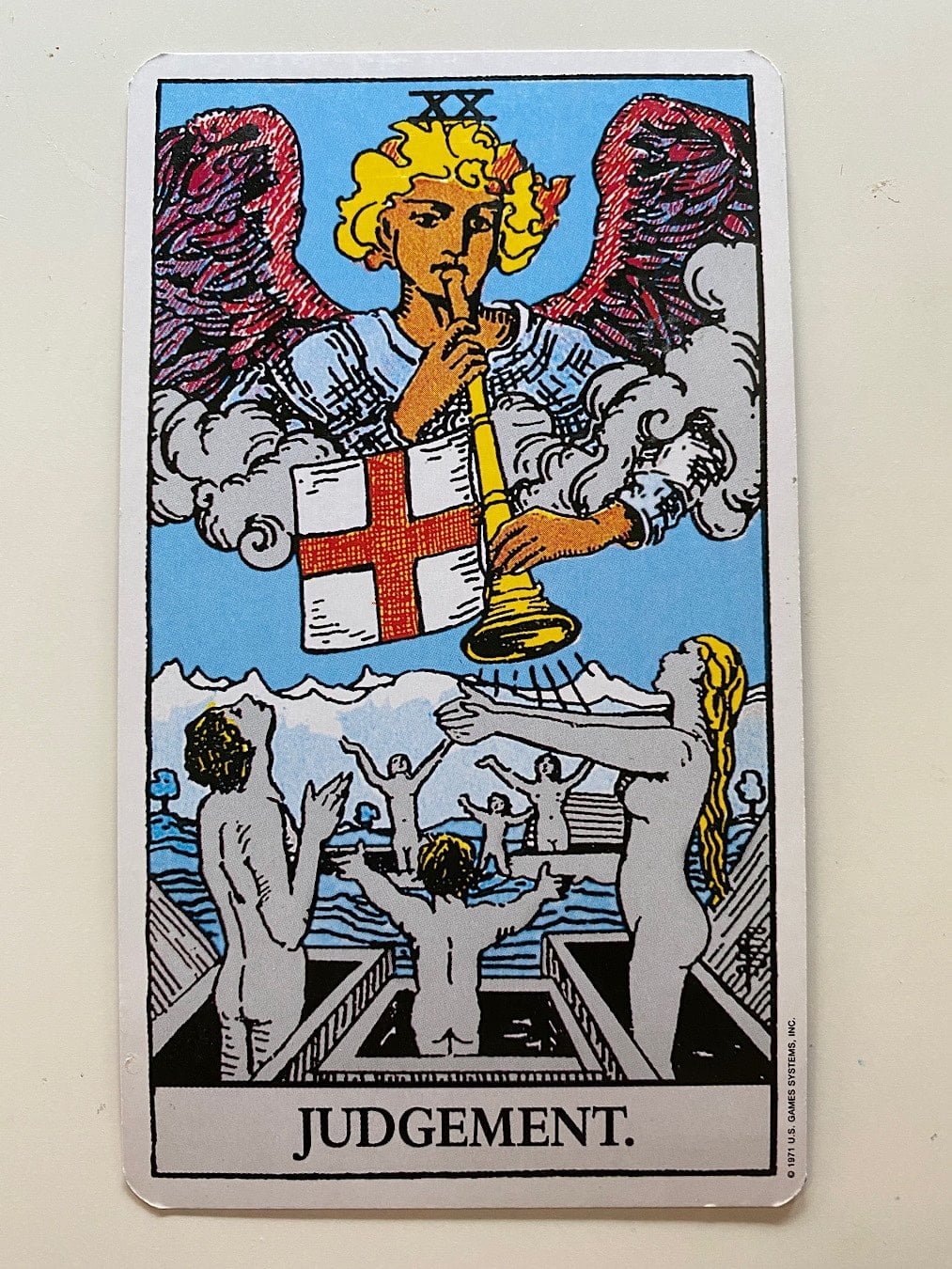 Elemental Trump of Fire and Spirit

Keywords: judgment, rebirth, transformation, waking up, new epochs in both history and our own lives

The traditional name is Judgment, referring to the Last Judgement of the Bible, Revelation, the end of the world. The card shows the Archangel Israfel blowing a trump proclaiming the Last Days, the end of the World, which comes in the next Trump. 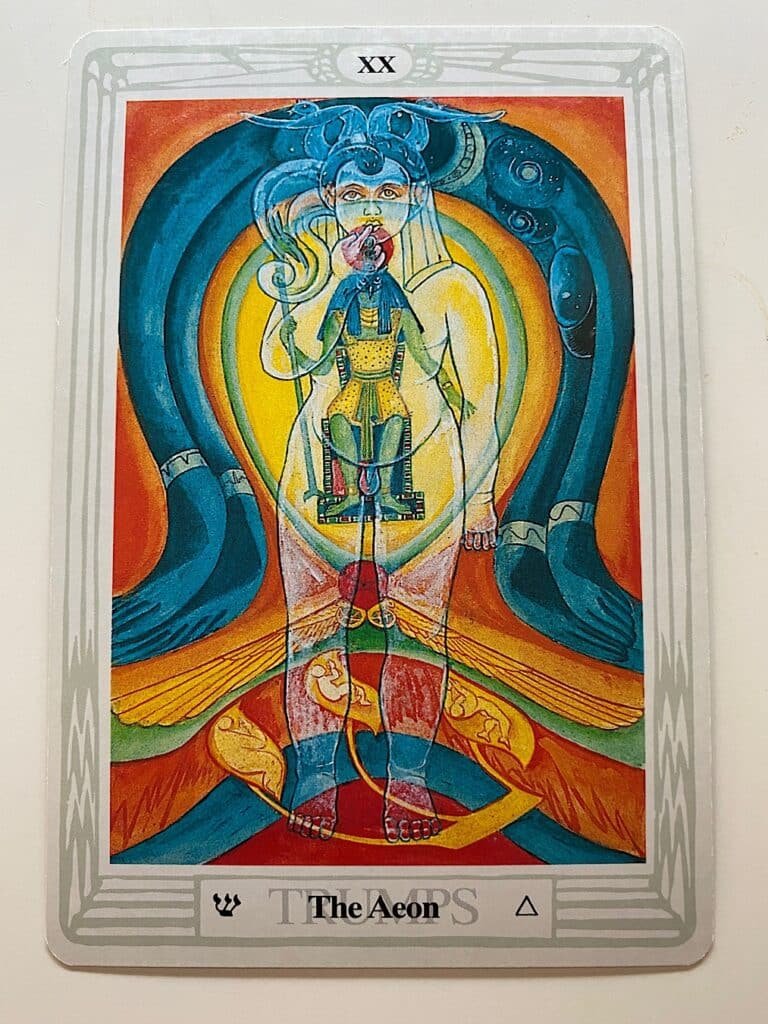 The Thoth tarot is unique because it is based on Crowley’s personal religious experiences, with the seminal, sacred text of his philosophy/religion Thelema being The Book of the Law.

In The Book of the Law, he is made aware of three gods: Nuit, the Goddess of infinite space, which is Nothingness; Hadit, the God of the singularity, the point; and Ra-Hoor-Khuit (Horus), their child.

In Egyptian mythology, Horus is usually said to be the child of Isis and Osiris. On its face, Crowley’s religious experiences are just a different framework for thinking about the ancient archetypes of Isis and Osiris, the Mother and the Father, the Goddess and the God, corresponding to the principle of femininity and masculinity, respectively.

Crowley’s version of the classic alchemical duality between masculine and feminine is framed in obvious Qabalistic language.

Nuit, Goddess of infinite space, which is a vacuum, which is nothingness, stands in for the principle that when it comes to 1, Kether, the Aces, there is always an implicit reference to that which is beyond the 1 but is incomprehensible to the human mind.

We call it Nothing, but it is really the aspects of God that are so beyond us that we have no positive idea of those aspects and have to rely on emptying our minds of ideas of what they are not.

Hadit, on the other hand, the contracted point, is the point of contact between the Nothing and the Something. It is the starting point of the process of emanation, from which emerge all aspects of the universe, both mental and physical.

Why did Crowley change the name of the Trump from “Judgement”?

Crowley thought it was necessary to change the name of the Judgement Trump because he believed this event had already happened. The Aeon represents the event when the Era of the Last Judgement ended and the New Era begins. Crowley calls this new Era The Aeon of Horus.

Crowley says this Aeon started on March 20, 1904, in an apartment in Cairo, where he and his then “Scarlett Woman” had a religious experience that became the Book of the Law. The event signals the death of the Osiris, an Old God, and the Rule of Horus, the Younger.

Where I differ from Crowley

I find Crowley’s system of Thelema inspiring but I do not share its belief system in totality. Unlike Crowley, I do not think the Old Gods like Osiris or Jesus, truly died. I think they are still very much a part of our current era. This is evidenced by the undeniable fact that millions of people tell us sincerely they have a spiritual relationship with Jesus.

If we are to trust Crowley’s account of his own religious experiences, we must thereby also accept the accounts of other people’s sincerely held religious beliefs. From the perspective of religious epistemology, there is no discernible difference in evidential weight for Crowley’s Thelema than the testimony from any other sincere person who has had religious visions.

Moreover, I am very skeptical of anyone who claims the whole world’s spiritual structure changes due to their own religious experience. It is nothing but sheer hubris. The spiritual world does not revolve around the spiritual experiences of just one person no matter how big their ego is.

Thus, I understand the Thoth Tarot system to be inevitably tied up with Crowley’s own unique religious beliefs as expressed through Lady Frieda Harris’ artistic interpretation.

However, if you squint at the Thoth Tarot just right you can see Crowley’s Aeon of Horus, the New Spiritual Era, as simply a metaphor for how you prefer to carve up the epochs of the world. One might argue that the new Age of Information we live in is substantially different enough from the Industrial Age to constitute a new human-spiritual epoch. The existential questions that confront us are archetypically similar to our primordial past but are also at the same time evolving and changing as we adapt to new environments. Right now we are adapting to the age of computation and it has revolutionized our entire lives. What does spirituality look like in the age of social media?