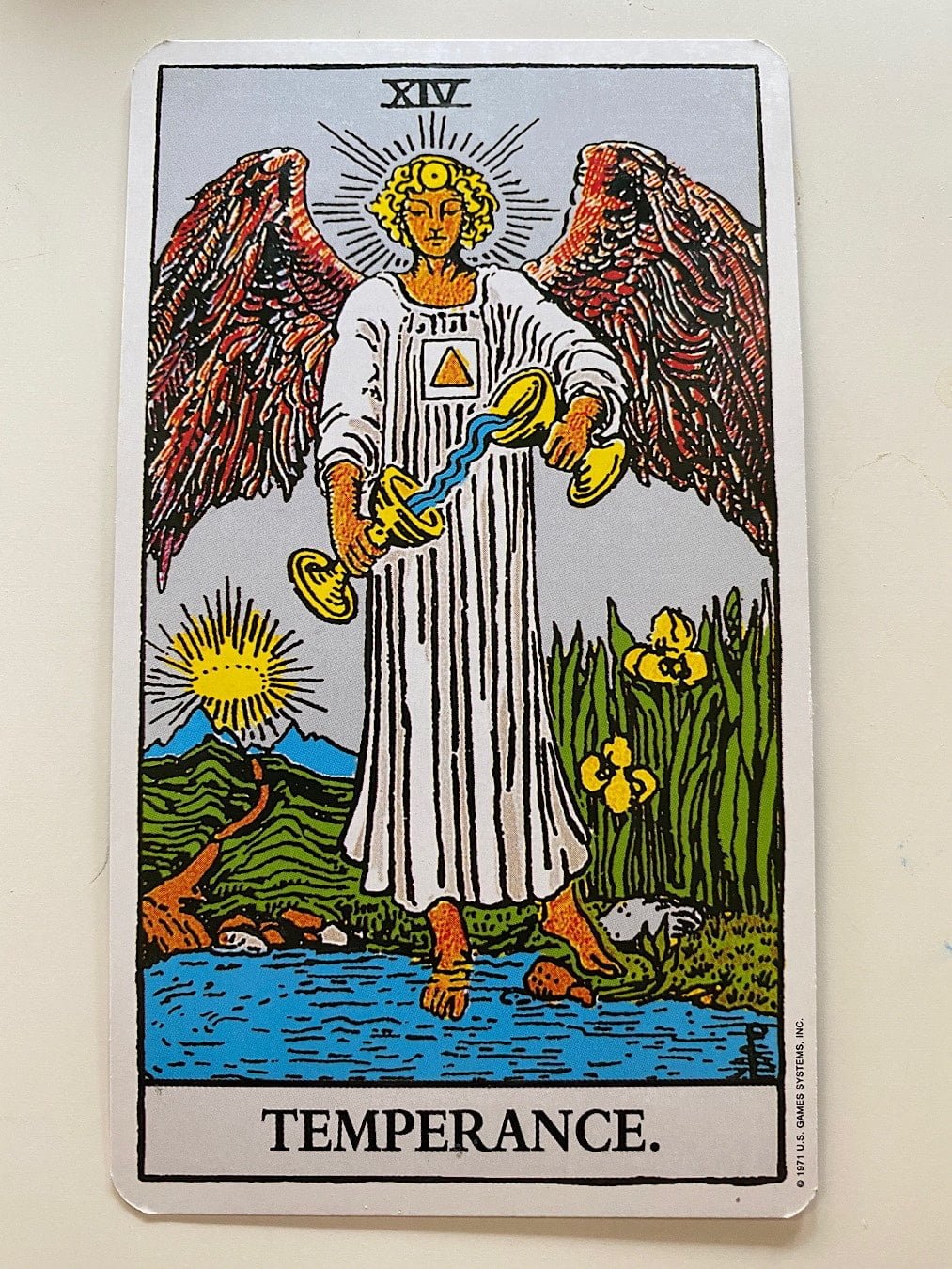 Tree of Life – Path of the Arrow – in the Middle Pillar

In the RWS we see an angel standing at the edge of a body of water, with one foot on the land and the other foot in the water. They are pouring water from one cup into the other.

The angel symbolizes the liminal transition between the material world and the spiritual world. It also suggests the alchemical process of balance between opposing elements, like what we see in the Two of Cups and The Lovers, where the masculine and feminine force find balance.

The wings of the angel are suggestive of the same winged egg we see in The Chariot and the caduceus of the Two of Cups. This is the hermetic principle of harmony between opposites: the balance and harmony of the “above” with the “below,” the left with the right, the top with bottom, the inside with the outside, the masculine with the feminine, the active with the passive.

Sagittarius is often associated with the Greek Goddess Diana (Artemis) the Huntress. In ancient statues of Artemis, she is depicted with many breasts, and in the center of Crowley’s Thoth card we see six breasts (perhaps representing 6, Tiphareth, who is the balance of all?). Diana is a lunar goddess and we see on her heads the crescent moon, also a symbol of her bow.

Crowley says this card is the logical fulfillment of The Lovers (Gemini) and the bride and the groom becoming unified.. Whereas in the Lovers there are Two, masculine and feminine, in Art we see the Two becoming joined via magickal operations in the cauldron into One androgyne being. It is the process the reticular nature of ourselves reaches the state of gnosis and experiences some kind of cosmic or divine union.

In the center of Artemis we see an arrow.

The Arrow of Artemis represents an attempt to cross from the material world to the divine world, that is, from 10, Malkuth, to 1, Kether. The bottom triangle of the tree of life corresponds to a rainbow and Artemis’ arrow is what pierces it, forming the pathway between Yesod (the Moon) to Tiphareth, the highest state of illumination.

The Arrow is a shot in the dark, for Kether is the Unknowable. Yet the Kether is still visualized as 1, at the top of the Tree of Life, and thus can come under the logic of the analogy where we come to know the unknown through the known.

In this sense, Kether is the lowest form of Unknowability, for it represents the Arrow of Artemis guiding our Minds as we ascend up the Tree, striving to understand the Mind of God by using the Tree of Life, using the Tarot, both of which are maps of human consciousness. We then use what we know best (Our Own Minds) in order to know the mind of God (the Mind of God).

The Arc of the Arrow shooting from Malkuth to Kether leaves behind it the multi-colored rainbow, God’s Promise. This represents the path up the Middle of the Tree of Life, which is the way of the mystic as opposed to the way of the student of occult science.