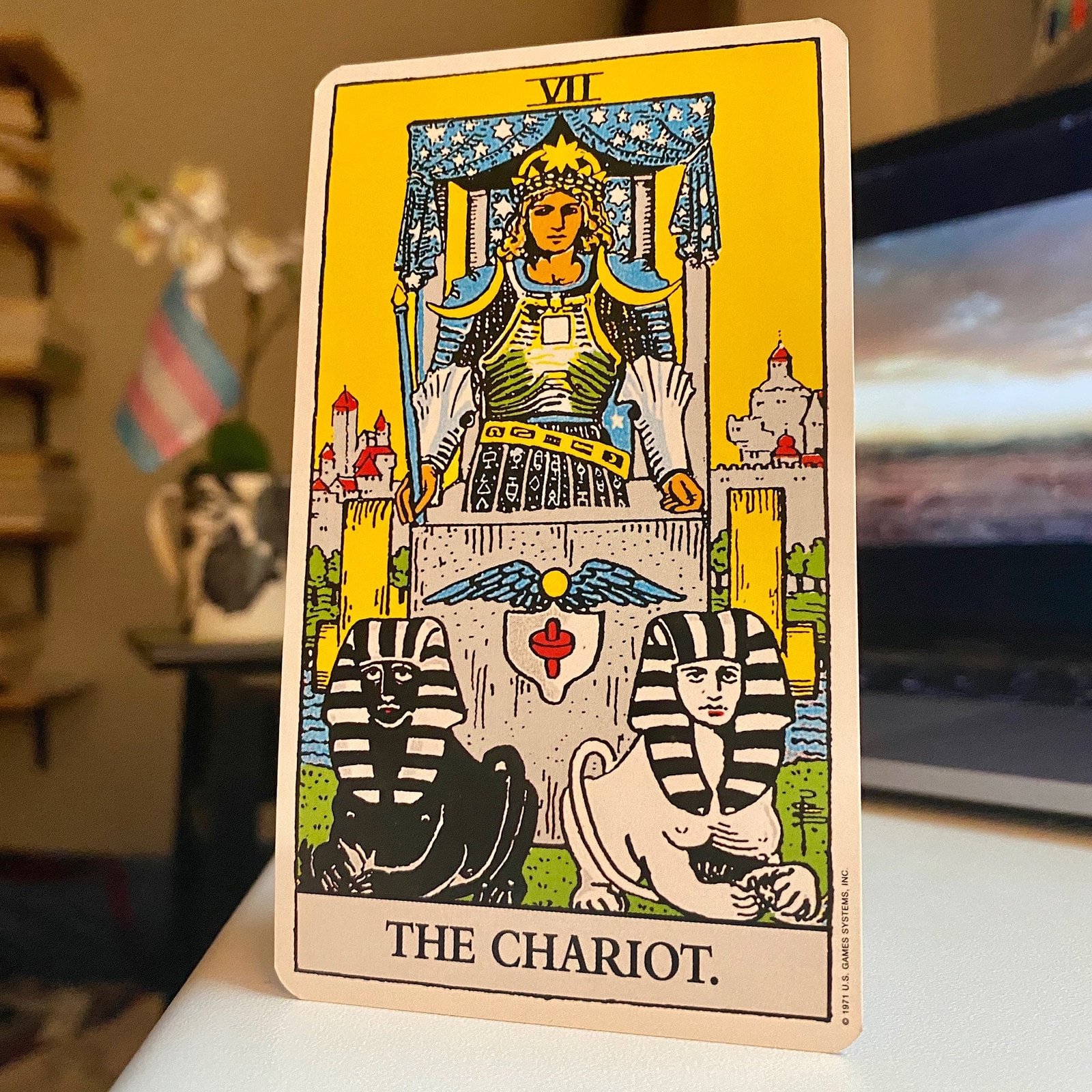 In the Chariot Tarot card, we see the Charioteer beginning his journey from the city behind him out into the world beyond, starting a journey in his vehicle, the chariot. He is in full control of the two sphinxes who pull him forward on his conquest by some invisible connection. Above him is a canopy of stars, indicating he is guided by the heavens, as above, so below. He is holding the wand of the Magician, suggesting he is capable of manifesting his destiny through the sheer determination of his willpower.

In the background is the castle of the Emperor. This is Power out in the world, seeking the Holy Grail, guided by the Moon and Stars. His cherubic beasts are mixtures of masculine and feminine energies, representing the idea of Balance and Harmony in the Tree of Life. The dark beast represents the negative principle of the Pillar of Severity and the light beast represents the positive principle of the Pillar of Mercy. Balanced together by the True Will of the Charioteer, they find balance in the Middle path forward.

The beasts are the living incarnations of the same dark and light pillars we see in the High Priestess, also seen in the two trees in the Lovers. The dark represents form and the light represents force. Passive and active. Concentration and expression. Feminine and masculine. But notice the light beast, representing masculinity, has breasts. This represents 7, Netzach, on the masculine side of the Tree of Life, being ruled by Venus, the feminine energy. It represents Victory. As a nonbinary person myself, I see this as an analogy for my trans feminine experience.

On the front of the chariot, we see the symbol of the Winged Egg, which represents the same concept of the cherubic beasts. The left-wing represents -1 and the right-wing represents +1 and together they cancel out to 0, the Orphic Egg, out of which springs all possibility. What looks like a spinning top is suggestive of the same principle of dynamic stability. The gyroscopic forces of the spinning top cancel out the instability of gravity to create harmony and beauty.

The Chariot Tarot meaning in the Thoth Tarot 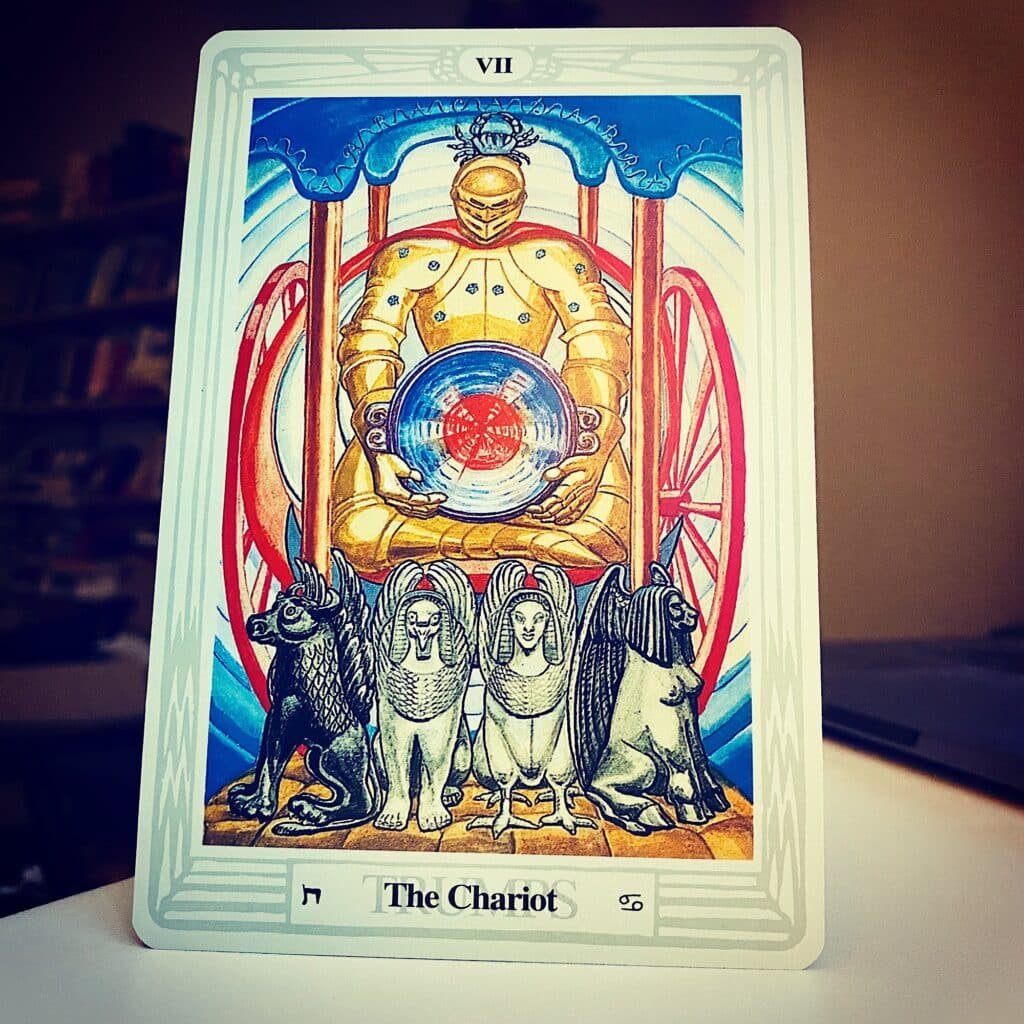 Ruled by Cancer, which is ruled by the Moon. Cancer season starts on the Summer Solstice.

Cancer represents Cardinal Water and is the first movement of the element of dense mobility. In the Tree of Life, The Chariot is the Path between the Great Mother Binah and Geburah, ruled by Mars. In this sense, the Chariot brings down the Water from the Supernal realm in the same way the Hierophant brings down Fire from Chokmah on the other side of the Tree of Life.

The blue canopy of the Chariot represents the watery depths of Binah. The four pillars represent the Tetragrammaton, the pillars of the Universe, out of which all energy and form manifest.

The Wheels of the Chariot represent the energy of Mars in Geburah, the ever-turning, ever-churning dynamism that powers our aggressive and destructive instincts.

The four cherubs or sphinxes represent the 16 different ways the elements can be combined, suggestive of the same amalgamations of passive/active energy in the Rider-Waite-Smith cards.

The Charioteer does not control the Chariot but merely sits on its throne, bearing the Holy Grail, presumably the same Holy Grail we see in Trump 11, Lust/Strength. Let’s remind ourselves the Holy Grail was said to have been drunk by Christ at the Last Supper and used to catch his blood upon being pierced on the cross by a spear. The Grail is thus the Blood of Christ and the Divine energy of God, we drink from it we might also partake in the gnosis He represents.

Fittingly, the Charioteer wears armor like the Crab, bringing his source of protection with him.

Jupiter is exalted in Cancer and thus the rays in the center disk represent Jupiter’s influence. The center disk suggests in its shape the full Moon and the waters of Binah. In the center, we also see the radiant Blood of the Holy Grail.

As a symbol of the Moon, the Chariot shares similarities with the High Priestess.

In the canopy, we see the word ABRAHADABRA. This word represents the magickal operation of marriage in the Tarot, which is the creative joining together of masculine and feminine energy, the same principle of cherubic energy which powers the chariot.

The Chariot thus represents the magickal operation of transformation when the watery embrace of the Great Mother is sublimated into the powerful energies of Mars in Geburah.

Biddy Tarot on the Chariot

Labyrinthos on the Chariot