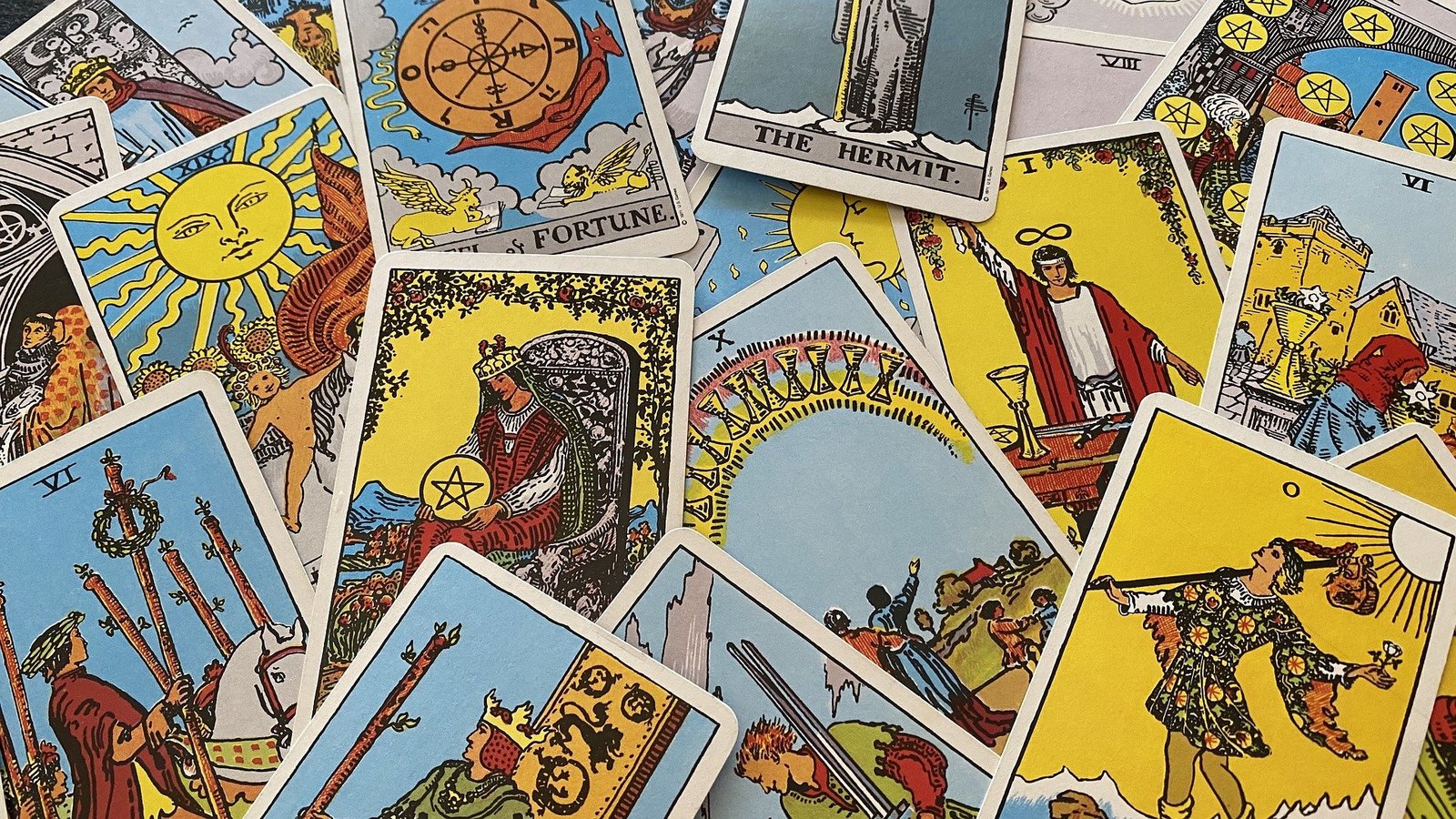 NOTE: This is an essay I wrote back in 2018 when I first came to doubt materialism and started becoming interested in things like Tarot and the occult. I have only gone further into the deep end since writing this, but thought it would be good to share for historical context.

Most people are familiar with Tarot cards from Hollywood, with smoky rooms, crystal balls, and mysterious people wearing turbans. A set of 78 cards with visual scenes tracing out cultural archetypes of Western life, Tarot cards can be traced back hundreds of years to a parlor game. But to the medievals, games were not just games like we think of monopoly today. They had a more serious undertone.

However, it wasn’t until fairly recently (past couple hundred years) that Tarot cards have been used for divinatory and occult purposes and it’s only in the last century that they’ve really exploded in popularity.

I had my Tarot read for the first time a couple months ago and I found the experience beyond insightful. I wasn’t a “believer”. I thought it was just a random shuffling of 78 cards that painted a story that I was able to relate my current life to because of the rich, interconnected meanings of the cards and their inherent ambiguity. I knew that the brain is a powerful pattern recognition machine and is capable of finding meaning in just about anything and especially randomness, and especially randomness coupled with visual imagery.

I saw it as a kind of vastly more complicated version of the Rorschach test that was connected to actual human archetypes of cultural life in addition to centuries of meaningful symbolism and associations. In other words, the random spread of cards was a rich canvas upon which to project my own narrative. If you can’t find meaning in a Tarot spread, that just means your brain isn’t working its story-telling muscles very well.

After such a positive experience, my interest was piqued. I bought my first deck, the original Rider-Waite-Smith deck. Since then I have been doing self-readings for myself and have found them all to be deeply meaningful, although it sometimes requires a good deal of interpretive work to tell a relevant and meaningful story relating to my life. I believe this has something to with the cultural archetypes of the cards and their interrelatedness.

If you have followed my intellectual interests over the years, you’d know I’m a huge fan of the psychologist Julian Jaynes, who had a theory of the human unconscious that said this is the origin of all archetypes of gods, deities, and religious experience. The unconscious mind, especially in relation to the right hemisphere of the brain, housed archetypes of personified “gods” that are much more intelligent than the tip of the iceberg that is our conscious minds, drawing on the power of parallel processing, associative thinking, and narratives. For Jaynes, this is the origin of guardian angels, gods, and all of the spirit guides that throughout history people have claimed to give them meaningful and relevant advice and guidance.

So now let me relate a story I had with the Tarot. I have been doing single-card readings where I basically draw a “card of the day” and see what my higher self, my unconscious mind, wants to tell me in relation to the particular associations of that card. One day I pulled The World card, which is traditionally thought to be one of the most positive cards in the deck. This resonated with me deeply as I have been flying on cloud 9 recently.

But that very same day a new deck arrived in the mail, the Radiant Rider-Waite-Smith deck. I shuffled thoroughly, got into a meditative space at my tarot altar, and pulled a card asking, “What does this new deck want to tell me.” Guess what card I pulled? The World!

I was blown away and in that moment it chipped away at my purely materialistic worldview, or at least brought me to a deeper appreciation of the meaningful power of coincidence. For me, it was perhaps the first mini-miracle I’ve ever really experienced. It made me started thinking about C.G. Jung’s theory of Synchronicity and I began thinking about rational explanations for how such magick was possible (one such explanation that occurred to me was the Nick Bostrum’s Simulation Hypothesis, which argues there’s a 1/3 chance of our minds being computer simulations, much like the Matrix.)

The skeptic, will, of course, remain unconvinced. It was only a 1/78 chance! Things more random than that happen all the time. It’s bound to happen by the sheer laws of probability. And then there’s powerful cognitive biases like the confirmation bias which could explain this. But I can’t help but shake this event from my mind. It has made me cast doubt on my strictly materialistic worldview. It seemed too perfect. Too meaningful. Totally causally unrelated yet deeply meaningful in associative power. What are the chances? And furthermore, of ALL the cards in the deck, The World card is the card I relate to the most because people have speculated the apparently female character is also the male fool, with breasts and a penis hidden by a ribbon:

But I must explain further what I mean when I say it chipped away at my previously strong belief in a strictly materialist worldview. I didn’t suddenly start believing in spirit beings, the Ether, ectoplasm, etc. By “materialistic worldview” I mean a macro-level world that follows a strong causal principle where everything can be explained by a deterministic causal sequence — what could really be considered the “Mechanical Worldview”. But quantum mechanics tells us the world is deeply and metaphysically statistical in nature. It tells us it’s theoretically possible for things like self-aware entities, called Bolztmann brains, to spontaneously pop into existence.

Serious scientists talk about such fanciful things, so who’s to say these wild and fantastical probabilistic phenomena don’t also apply to the world of the occult and we just don’t understand them yet?Who knows what acausal principles are at work in our universe that we are not aware of? Maybe the Agents of the Matrix are fucking with us. Maybe we just don’t know how reality works yet. Maybe our understanding of the universe is incomplete — which makes sense — afterall, why would evolved apes have the full-fledged capacity to understand 100% of the reality around them? 5,000 years from now scientists might laugh at the naivety of our supposed “scientific worldview”.

Maybe the principles of causality which say my 1/78 chance Tarot card draw is just a “random coincidence” are incomplete in ways we don’t fully understand. I therefore propose that the best position to take is that of agnosticism, which is what I mean when I said a crack was made in the strength of my conviction in a purely materialistic worldview.

Or maybe I’m wrong and it was just pure chance. But regardless it was a chance event that had a deep impact on my psychology and thus made a positive change in my life, embarking me on a spiritual journey that has brought me great personal empowerment. As a philosophical pragmatist, I’ve never been a huge fan of the correspondence theory of truth. I tend to view truth in terms of “what works” for the individual.

Scientists and materialists might be aghast at such claims but I don’t think pragmatism is incompatible with belief in the power and reality of the scientific worldview because in some sense “What works for us” is an objective fact.

Take vaccines, for example. I believe it is objectively true that vaccines “work” for us better than not-believing in vaccines.

But is this not a contradiction? If an anti-vaxxer sincerely believes avoiding vaccines “works for them” is that not true for them? You can easily how this could be applied to all kinds of woo and dangerous snake-oil, undermining the great strides we’ve made as a society battling irresponsible and harmful superstitions (which is not to diminish the incredible power of placebo and self-healing the brain/body is capable of).

But I think this fundamentally differs from Tarot in the following way: Tarot is personal and psychological whereas anti-vaxxing could have drastic negative effects on children and the public health.

So I think we can add a “no harm” principle into our pragmatism. If your personal beliefs are not harming yourself or the broader human society, and those beliefs “work for you”, then they are true for you.

I think this is how we can make sense of phenomena like religious and mystical experience, which is what William James was originally interested in explaining with his theory of pragmatism. If someone believing a prayer helps them, it’s true for them. If an atheist believing that prayer is bullshit helps them makes sense of the world, that belief is true for the atheist. If someone makes offerings to Pagan gods, and then sees positive benefits in their life, the reality of those Gods is true for them, again, so long as those beliefs aren’t causing harm to themselves or the broader human society.

And this is how I think of things like Tarot and witchcraft, and the occult more generally. Life is short. We all crave meaning and connection. Human knowledge is in its infancy. Agnosticism is the strongest epistemological principle. Humility is a virtue. Open-mindedness is healthy. Empathy is important.

And that’s why I believe in the power of the Tarot.