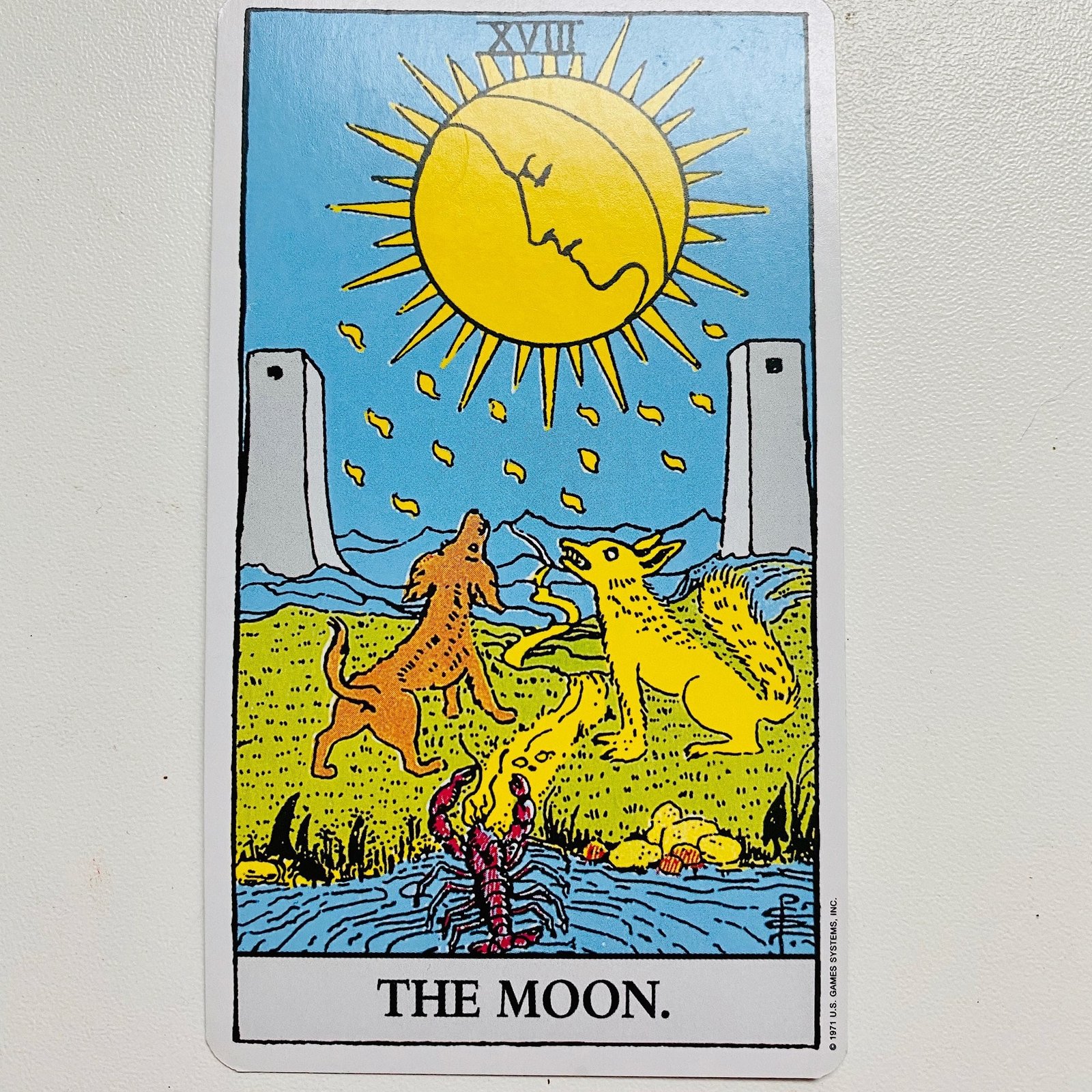 In the RWS Moon we see the mysterious Moon looking down on a strange scene. Two dogs, one light, one dark, stand at the edge of a pool of water with a lobster emerging out of the depths.

As a creature who lives on both the bottom of the ocean and can emerge out of it as well, the lobster is associated with the liminality between consciousness and unconsciousness.

In the Legends of King Arthur, lakes and bodies of water were considered to be portals to the fairy realms. Indeed, a mysterious Lady of the Lake is said to have given Arthur the magical sword Excaliber. The same symbolism of the fairy realm is implied in the imagery of The Moon, which, psychically, operates as a portal to the unconscious.

Falling from the Moon are the leaves of Yod, the first letters of YHWH, the same ones we see in the Ace of Cups and the Tower. Thus, this is a card of possibility and emotional depth as well as a card of mystical consciousness, especially insofar as the Moon also rules the High Priestess.

Between the two dogs runs a pathway between two strange Towers, almost like Obelisks, which goes deep into the unknown lands, dark blue in contrast to the green grass the dogs stand on.

This pathway is another symbol of the journey from consciousness to the depths of unconsciousness.

Waite says in the Pictorial Key to the Tarot,

“The intellectual light is a reflection and beyond it is the unknown mystery which it cannot shew forth. It illuminates our animal nature, types of which are represented below–the dog, the wolf and that which comes up out of the deeps, the nameless and hideous tendency which is lower than the savage beast. It strives to attain manifestation, symbolized by crawling from the abyss of water to the land, but as a rule it sinks back whence it came. The face of the mind directs a calm gaze upon the unrest below; the dew of thought falls; the message is: Peace, be still; and it may be that there shall come a calm upon the animal nature, while the abyss beneath shall cease from giving up a form.” [emphasis mine]

Deleuze and Guattari, in their book A Thousand Plateaus, liken the depths of human unconsciousness, our Deepest Self, to a wolf-pack.

This concept of self-as-pack or self-as-multiplicity is exactly what Waite is referring to by our “animal” nature with the two wolves. Deleuze and Guattari say,

“A becoming-animal always involves a pack, a band, a population, a peopling, in short, a multiplicity. We sorcerers have always known that.”

However, for Deleuze and Guattari this is not just a metaphor:

“It is not a question of representation: don’t think for a minute that it has to do with believing oneself a wolf, representing oneself as a wolf. The wolf, wolves, are intensities, speeds, temperatures, nondecomposable variable distances. A swarming, a wolfing.”

Fittingly, the Moon a card of Cunningfolk and witches everywhere, close as they are the Nature.

The Moon represents astral consciousness, our psychic connection with the Moon, infused with Solar energy that is reflected in the soft, silver flow of moonlight.

If you see this card in a reading, reflect on what you can do to tap into this Lunar energy.

And remember, the goal is not to be intuitive for its own sake. Rather, the goal is to use the power of the Moon to get back to the daylight of inner illumination and equilibrium, divine Beauty, the highest state of consciousness we can achieve while in our Early bodies (Tiphareth, the state of enlightenment, the mind of Christ, redemption, heaven on Earth).

Pisces represents the “last stage of winter.” Crowley calls it the “Gateway of Resurrection.”

Crowley calls it the “Poisoned darkness which is the condition of the rebirth of light.”

Khepri, the Egyptian scarab-faced God, the sacred Beetle, represents the rising Sun – rising in both the morning and at the end of Winter. It is he who carries the Sun through the darkness of night and winter.

Crowley suggests the path is guarded by Tabu, which could be taken to represent the Forbidden or taboo.

In this card, Pisces represents the end of Winter and in its association with the Moon the end of the Night. The resurrection of the Sun is one the other side of the mysterious gates, beyond the blood-soaked pathway under the nine bloody drops of Yesod.

But as we go into a Full Moon, we can remember why everything is intoxicating under the moonlight. There is a reason why the term “Lunatic” has a Lunar origin. The Moon is associated with madness.

The Moon serves a dual function. In the High Priestess, the Moon connects us to the highest levels of the Divine. But it is also the closest planet to Earth and is thus connected to Malkuth, the lowest form of matter. This duality leads to the possibility of magick.

This is the Moon of Witchcraft. Here, “the fiery sense is balked.” Our mind must rely on the lower senses.

To pass back into the light of Day we must appeal to the God Anubis, the “watcher in the twilight,” guarding the Gates of Resurrection with the jackals of the night.

However, Crowley says that whatever terrors afflict the Soul in the dark of the night under the influence of the Moon, the answer is always the same: “How splendid is the Adventure!”