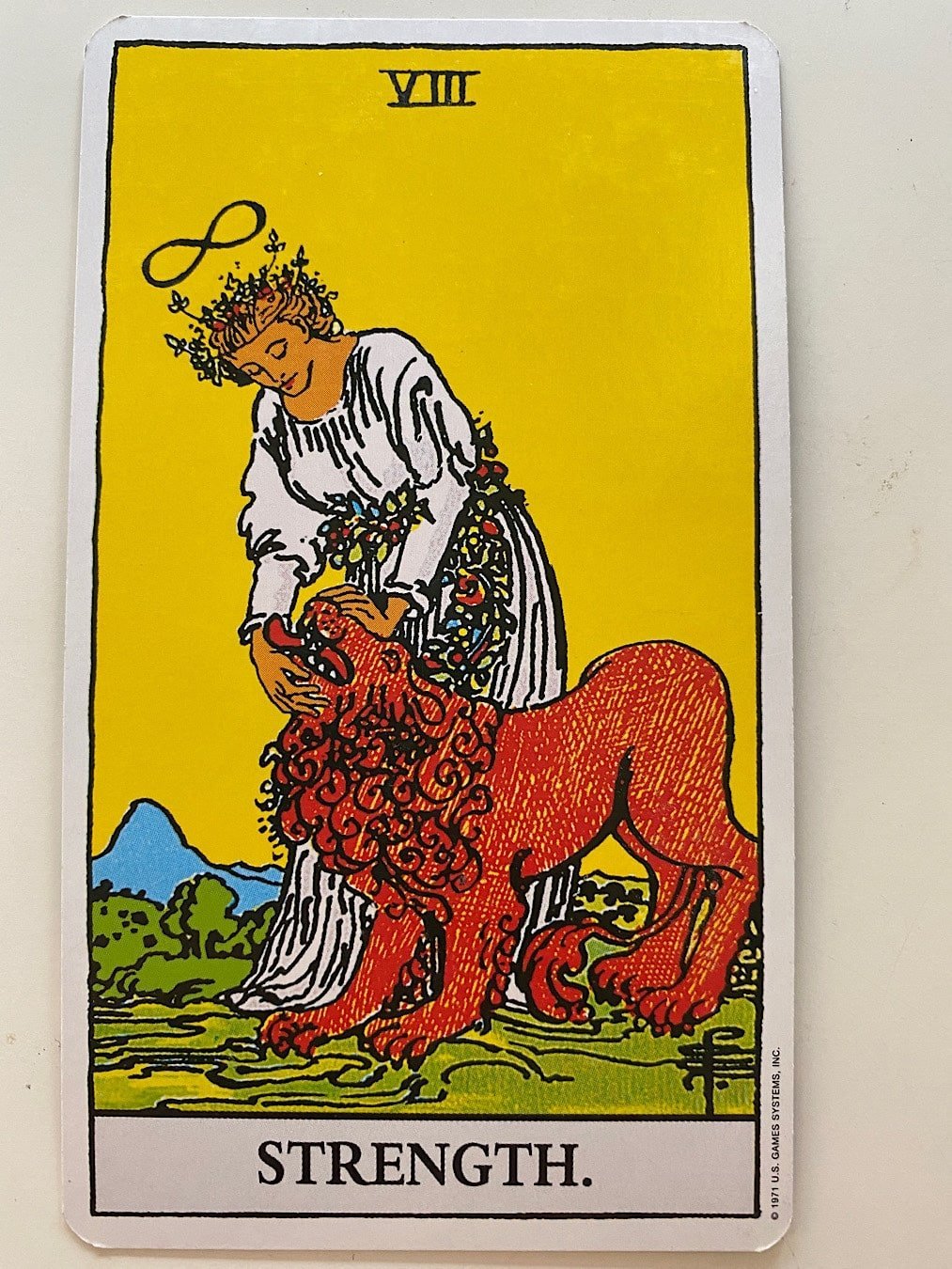 A woman robed in white and adorned with red roses stands beside a lion, closing his mouth. She tames the lion, the great beast, not through brute force, but through calm resolve, pacifying his brutish tendencies through the force of her character. The lemniscate of infinity hovers over her head, symbolizing her connection with the eternal, indicating life ever renewing itself, her power endlessly flowing in balance with itself. She is a powerful figure and like the Magician, her clothing is of red and white.

The card indicates that you must use love to conquer hate, and you must appeal to your higher self to overcome any temptation of the material world.

As a symbol, Strength represents the beatitudes in a way: the meek will inherit the Earth. Vulnerability is a strength.

Classically, Strength represents the virtue of Fortitude. This virtue allows us to conquer our fears, both spiritual and physical. This is the courage one must have in order to initiate into the Mysteries, to give yourself the strength to face Ego-Death and let go of your worldly fears. As the Litany of Fear from Dune goes,

I must not fear.

Fear is the mind-killer.

Fear is the little-death that brings total obliteration.

I will face my fear.

I will permit it to pass over me and through me.

And when it has gone past I will turn the inner eye to see its path.

Where the fear has gone there will be nothing. Only I will remain.

A woman, over whose head there broods the same symbol of life which we have seen in the card of the Magician, is closing the jaws of a lion. The only point in which this design differs from the conventional presentations is that her beneficent fortitude has already subdued the lion, which is being led by a chain of flowers. For reasons which satisfy myself, this card has been interchanged with that of justice, which is usually numbered eight. As the variation carries nothing with it which will signify to the reader, there is no cause for explanation. Fortitude, in one of its most exalted aspects, is connected with the Divine Mystery of Union; the virtue, of course, operates in all planes, and hence draws on all in its symbolism. It connects also with innocentia inviolata, and with the strength which resides in contemplation.

These higher meanings are, however, matters of inference, and I do not suggest that they are transparent on the surface of the card. They are intimated in a concealed manner by the chain of flowers, which signifies, among many other things, the sweet yoke and the light burden of Divine Law, when it has been taken into the heart of hearts. The card has nothing to do with self-confidence in the ordinary sense, though this has been suggested–but it concerns the confidence of those whose strength is God, who have found their refuge in Him. There is one aspect in which the lion signifies the passions, and she who is called Strength is the higher nature in its liberation. It has walked upon the asp and the basilisk and has trodden down the lion and the dragon. 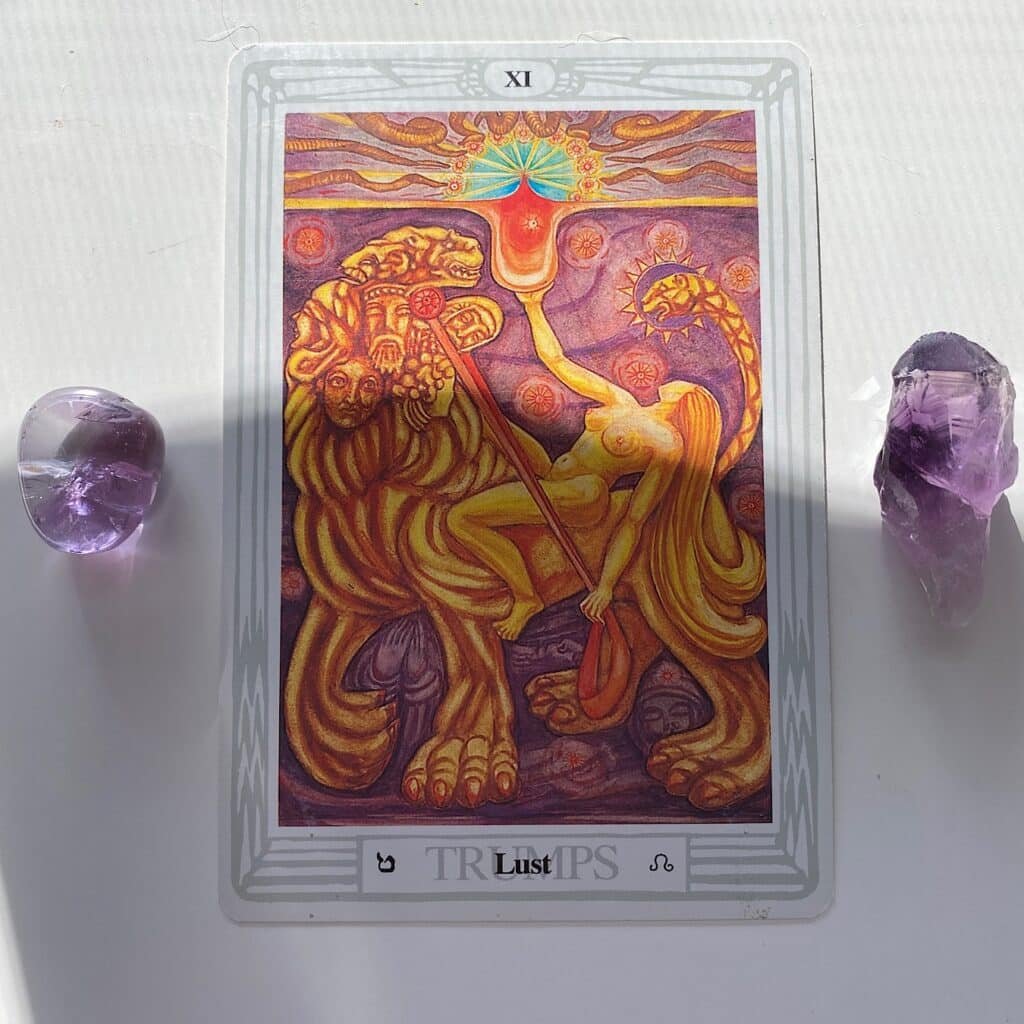 Strength is what Crowley calls Lust. Represents Leo. Number 11 in the Crowley-Harris Thoth Tarot. The reasons for the switch of Strength and Justice are Qabalistic and Zodiaical.

Crowley calls it “Lust” instead of Strength because Strength only means you are strong whereas Lust implies there is a “joy of strength.” Qabalistically, Lust lies in the horizontal path between Chesed and Geburah, or, between the Wise King and the Warrior-King, between mercy and righteous anger, between Jupiter and Mars.

Lust is ruled by Leo and Leo is ruled by the Sun and this is “the most powerful of the twelve Zodiacical cards,” according to Crowley.

This card is the raw, primal form of the magickal operation of the Lovers in card Six, the co-mingling of the feminine and the masculine principles.

The woman in the card is a form of the Moon along the Path starting from the Crown of God, Kether, and down through the Sun and into the Moon. The Lion-Serpent is an incarnation of God in the form of a many-headed Lion.

The energy of the card is “of the primitive, creative order.”

The Woman is holding the Holy Grail, which has absorbed all the Life force of the Saints buried in the background.

Behind the Lion-Serpent and the Woman are ten illuminated spheres, representing the ten sephiroth of the Tree of Life.

In her left hand, she holds the reins of the Beast. This is a symbol of her power.