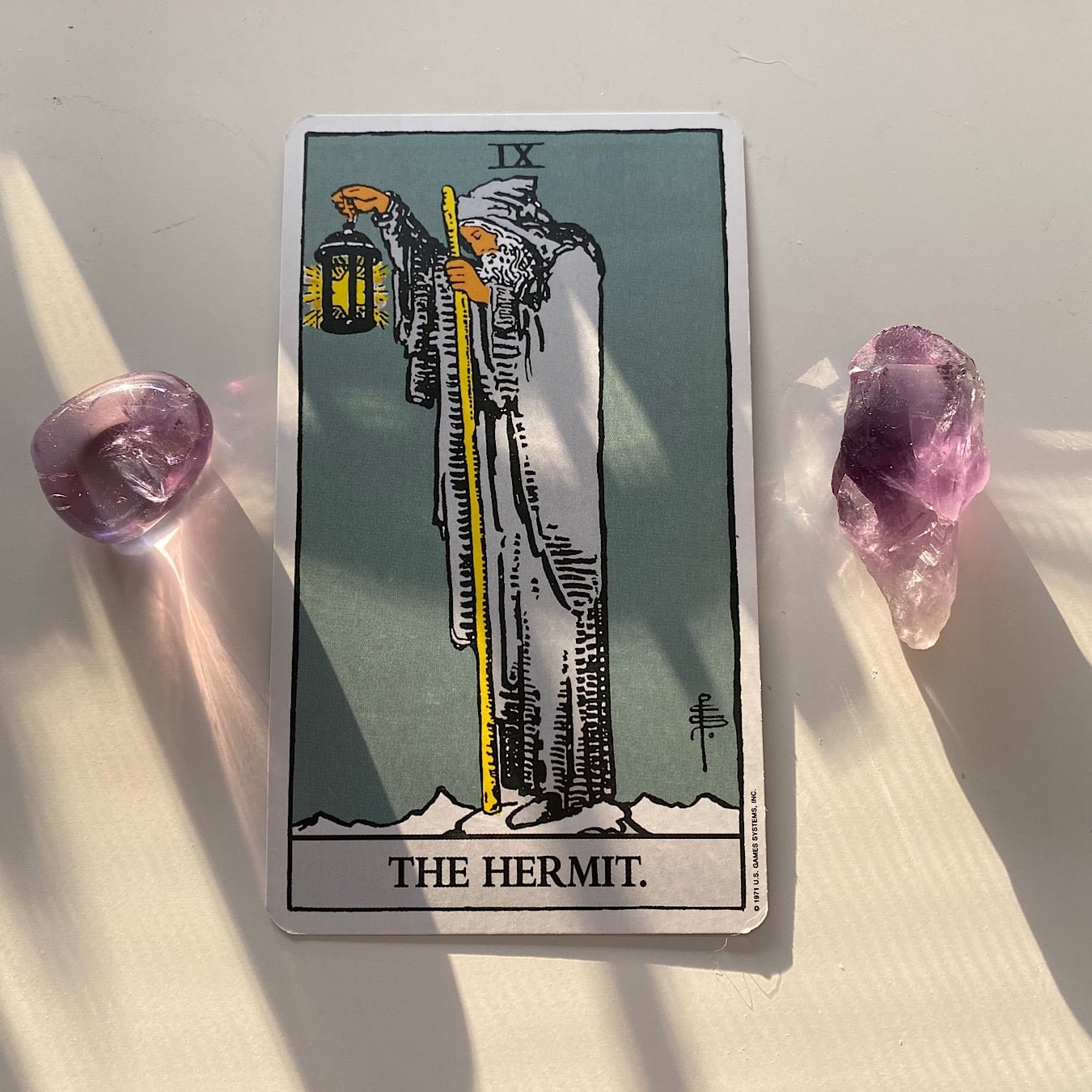 Mercury rules and is exhalted

“He who knows others is wise; he who knows himself is enlightened.” ~ Lao Tzu

An old man in grey robes stands on a snowy mountain top, holding a staff in one hand, and a lantern in his other hand. The lantern is lit by a shining six-pointed star inside of it. The man looks like he is deep in contemplation, or weary from a long, spiritual journey. He is like Gandalf the Grey or Merlin, the old wizard, a man who knows many deep secrets and is a man of power and magick. He is a prophet. Waite calls him a Sage.

Although the Hermit has spent many years in solitude learning deep truths, he is willing to teach and guide those eager to learn. He also represents those of an introspective disposition, turning inwards to reflect on the self and higher truths. The lantern is both a light to illuminate his path and also a beacon for others to follow. However, the lantern is lighting his own path – he is not following the tradition of others, but using his long-studied knowledge to navigate through the snowy mountains.

If the querent sees the Hermit, they should look to accept the advice of a wiser person. Or they should know they need to begin a path of introspection and contemplation to find Divine Wisdom.

As Mercury in Virgo it represents the Mind pouring itself into the Earth and being exalted in the process of individuation.

From an archetypal and mythological perspective, the Hermit is a familiar trope. He represents what Joseph Campbell called the Supernatural Aid on the Hero’s journey that will appear to the young Fool to initiate him into the strangeness of the world. The Supernatural Aid is a guide and a helper, usually an older figure who will impart their wisdom and offer training.  He is the Obiwan Kenobi to Luke Skywalker. The Gandalf to Frodo. The Dumbledore to Harry Potter. The genie to Aladdin.

In the context of the spiritual journey that is the Tarot, the Hermit might represent a divine aid, perhaps our Holy Guardian Angel, a spirit guide, or a teacher on the path that will initiate us into the mysteries. Or perhaps it represents the path of self-initiation, a magical book that is found via synchronicity that tells us exactly what we need to hear in that moment in order to wake up for the first time. Either way, the Hermit’s lantern is a symbol of hope and destiny, a sign that we have been called into the Fool’s Journey and that we can achieve the Wisdom of the Mentor.

The Hermit is the quintessential Individual and Monk. The Scholar. Pouring their energy into their intellectual work, an expert at their craft. Guided by the Star within his Lantern, the Hermit seeks to share his Light with others.

The variation from the conventional models in this card is only that the lamp is not enveloped partially in the mantle of its bearer, who blends the idea of the Ancient of Days with the Light of the World It is a star which shines in the lantern. I have said that this is a card of attainment, and to extend this conception the figure is seen holding up his beacon on an eminence. Therefore the Hermit is not, as Court de Gebelin explained, a wise man in search of truth and justice; nor is he, as a later explanation proposes, an especial example of experience. His beacon intimates that “where I am, you also may be.”

It is further a card which is understood quite incorrectly when it is connected with the idea of occult isolation, as the protection of personal magnetism against admixture. This is one of the frivolous renderings which we owe to Éliphas Lévi. It has been adopted by the French Order of Martinism and some of us have heard a great deal of the Silent and Unknown Philosophy enveloped by his mantle from the knowledge of the profane. In true Martinism, the significance of the term Philosophe inconnu was of another order. It did not refer to the intended concealment of the Instituted Mysteries, much less of their substitutes, but–like the card itself–to the truth that the Divine Mysteries secure their own protection from those who are unprepared.

According to Waite, The Hermit is not a card about seeking Truth but a kind of having attained Truth. The Hermit has found it on his mountain, and his beacon of light tells us “You can also achieve this.” It is thus a message of hope and not a message of a journey. It symbolized the attainment, not the journey towards attainment.

And the second paragraph intimates another interesting angle insofar as the Hermit does not represent the isolation and concealment of knowledge, but rather, the fact that, once such knowledge is secured, you will be protected as an individual against the spiritual ills of the world. 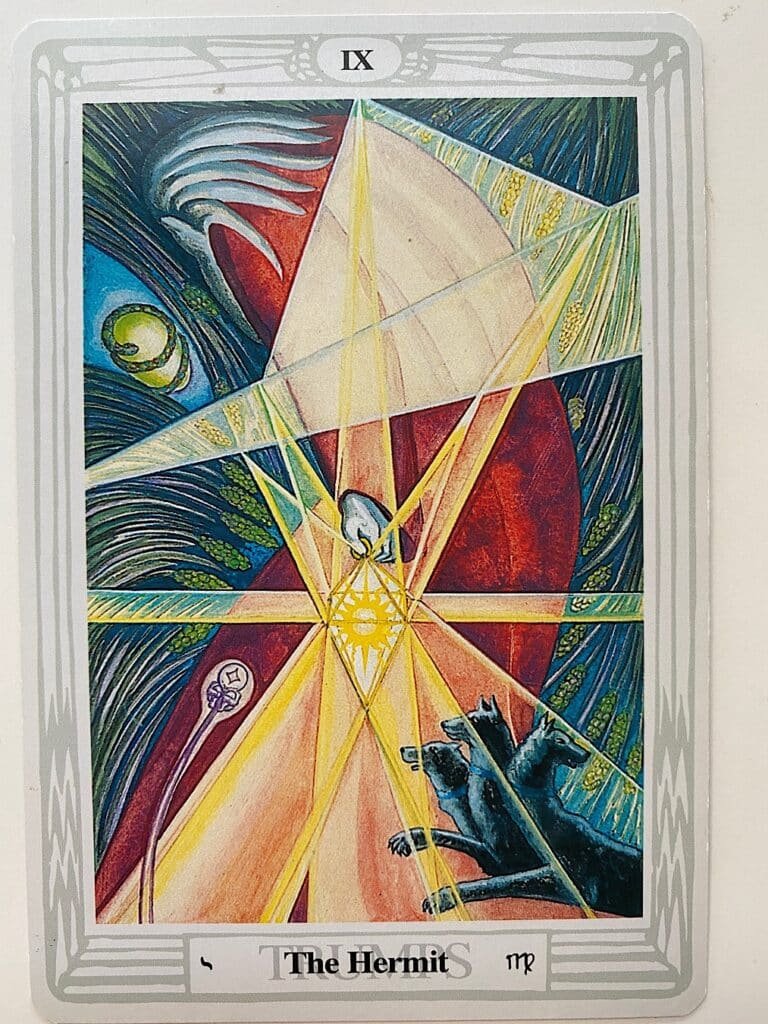 As a representation of Virgo, the Hermit is Fixed Earth. But really it is more like continually pouring yourself into the Earth. This energy is creative. The Earth is fertile. The Hermit contemplates the Orphic Egg, which gave birth to the intersex deity who then had within themself the potential to birth all the other gods.

The Hermit is surrounded by wheat, representing Persephone, the Goddess of Wheat, and the Goddess of the Underworld, who gives hope to its souls. The Hermit is thus also a psychopomp, guiding the soul after death with the Lamp of pure Sunlight, the Life of the Universe. The Hermit’s wand reminds one of the active force in reproduction and the card represents Yod, the first letter of the Tetragrammaton, who is King, Wisdom.

In his usual cryptic occult poetics, Crowley says of the Hermit:

“In this Trump is shewn the entire mystery of Life in its most secret workings. Yod=Phallus=Spermatozoon=Hand=Logos=Virgin. There is perfect Identity, not merely Equivalence, of the Extremes, the Manifestation, and the Method.”