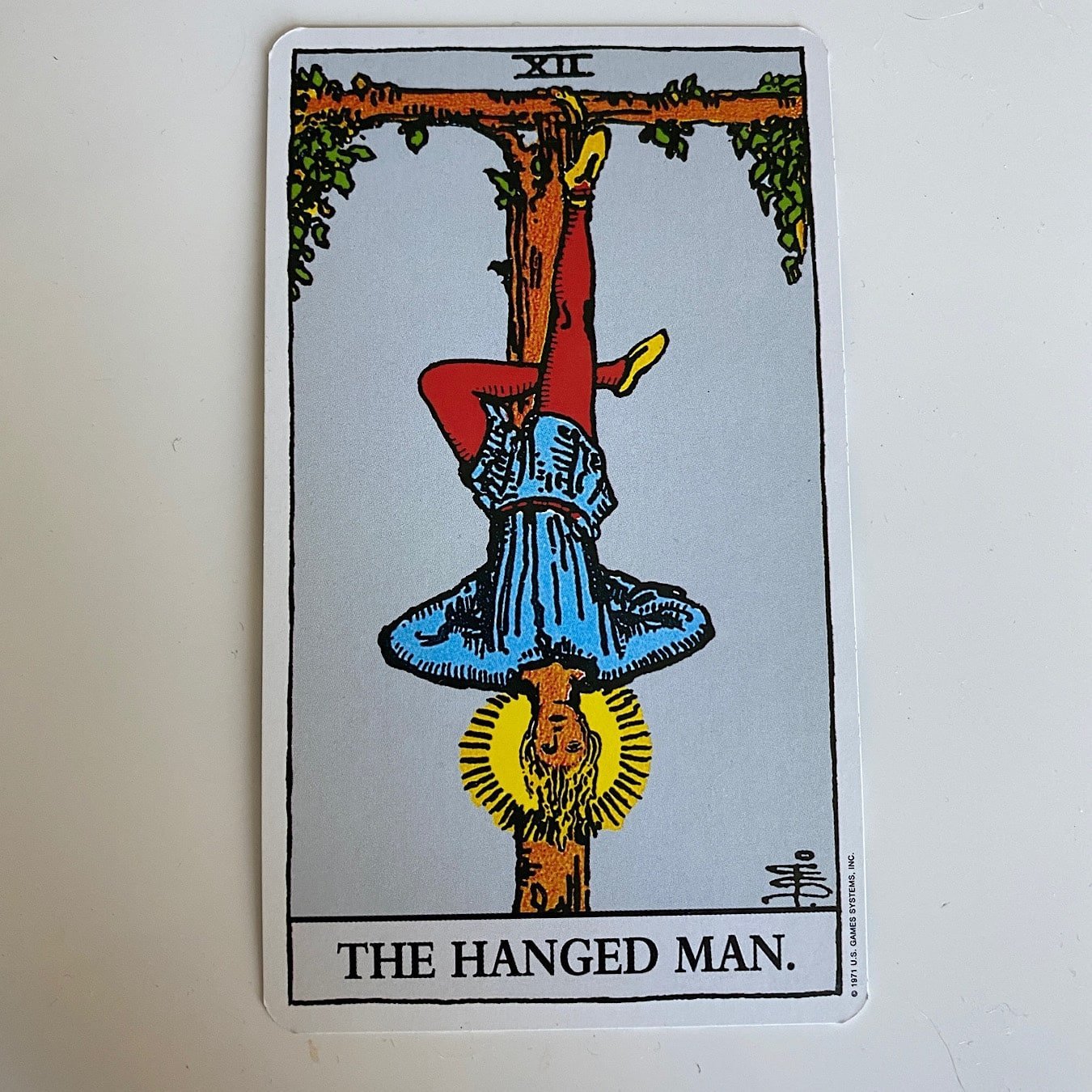 In the Rider-Waite-Smith we see a man calmly hanging upside down with one foot tied to a wooden “T” cross, with greenery on the top beam. Waite calls the cross a “gallows” and “tree of sacrifice,” like the Norse Yggdrasil, or Tree of Life.

Despite the grisly circumstances, the man has a radiant yellow halo around his head, reminiscent of Christian figures in stained glass and has a calm expression on his face.

Famously, and most mysteriously, the man has his arms behind his back and his left leg crossed behind his right leg.

Why would he cross his legs? Waite says in his Pictorial Key:

The gallows from which he is suspended forms a Tau cross, while the figure–from the position of the legs–forms a fylfot cross. There is a nimbus about the head of the seeming martyr. It should be noted (1) that the tree of sacrifice is living wood, with leaves thereon; (2) that the face expresses deep entrancement, not suffering; (3) that the figure, as a whole, suggests life in suspension, but life and not death. It is a card of profound significance, but all the significance is veiled. One of his editors suggests that Éliphas Lévi did not know the meaning, which is unquestionable nor did the editor himself. It has been called falsely a card of martyrdom, a card a of prudence, a card of the Great Work, a card of duty; but we may exhaust all published interpretations and find only vanity. I will say very simply on my own part that it expresses the relation, in one of its aspects, between the Divine and the Universe.

He who can understand that the story of his higher nature is imbedded in this symbolism will receive intimations concerning a great awakening that is possible, and will know that after the sacred Mystery of Death there is a glorious Mystery of Resurrection.

He calls the famous crossed legs an example of a fylfot cross. What is a fylfot cross? It is related to another ancient symbol, the swastika: 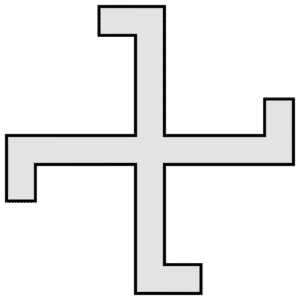 The Fylfot was widely adopted in the early Christian centuries. It is found extensively in the Roman catacombs. A most unusual example of its usage is to be found in the porch of the parish church of Great Canfield, Essex, England.[11] As the parish guide rightly states, the Fylfot or Gammadion can be traced back to the Roman catacombs where it appears in both Christian and pagan contexts.[12] More recently it has been found on grave-slabs in Scotland and Ireland.[13] A particularly interesting example was found in Barhobble, Wigtownshire in Scotland.14] [emphasis mine]

It is important to note that although the fylfot, or swastika, is most famous from its appropriation and usage by Nazis, the symbol itself does have a long secular and sacred history prior to the adoption by the Nazis. This is not to say that one can just run around and use such symbols willy-nilly given the context of modern history. But the context of ancient history is important for understanding the meaning and depth of this important symbol, albeit a symbol that is now commonly twisted to fit the ideology of fascists.

The original meaning is obscure, but the fylfot and symbols like it, with their bent tips, suggest swirling motion. Since ancient times, they were associated in pagan times with the sun and called solar crosses. In Norse contexts, it was commonly associated with Thor, the God of Thunder.

Relevant to Waite’s Christian influences, the symbol is associated with the Church of England. The connection with cross symbolism and solar deities suggests another example of the common theme in Christian colonialism, whereby local solar gods were vacuumed up into a monotheist Christian God, who, via the trinity, was also identical to his Son, Christ, who sacrificed himself on the cross.

Thus the yellow radiance of The Hanged Man’s halo is a reference to both the Christian tradition and the older pagan tradition. Same for the Tau cross and the fylfot cross.

In effect, the symbolism of The Hanged Man is that of mystery. But one point is certain: it deals with the relationship between deities and humanity, especially deities like Jesus and Odin who sacrifice themselves on trees. In Odin’s case, he sacrificed himself to himself for the sake of gaining occult wisdom and in the case of Jesus, he sacrificed himself for the sake of saving humanity.

Regardless, The Hanged Man represents a shift in consciousness, a turning point where, as Waite acknowledged, a great awakening is achieved. It is brought about by sacrifice.

But the lesson is that of surrender. Surrender yourself to the Mystery and your life will change just as Odin hung from the World Tree, Yggdrasil, for nine days and nights so that he could receive his gift of prophecy and wisdom.

More concretely, it is about flexibility and letting go while seeing things from a new light.

Personally, I have always seen this card in terms of a transcendental consciousness, like the gnostic quest for transcendence or the psychedelic experience of joyous union with cosmology. Sacrifice your Ego, and the artificially constructed boundary between yourself and everything else melts away.

It is only by having the bravery and calmness to step onto the gallows that we can be comfortable with the death of our Ego, a process familiar to mystics across history and tradition.

Moreover, Christians believe St Peter was crucified upside down, apparently upon his request, as to not copy Jesus Christ. The Hang Man is perhaps suggesting to be bold in our surrender, yet not arrogant enough so that we get Messianic delusions.

If you see The Hanged Man in a reading, you might be stuck in your current situation. But the card indicates that if you can let go of your current perceptions, you can make progress in your life. But you have to trust yourself and be willing to take the unconventional approach.

There is also an element of suspension, of hanging in the balance, waiting things out before difficult decisions have to be made.