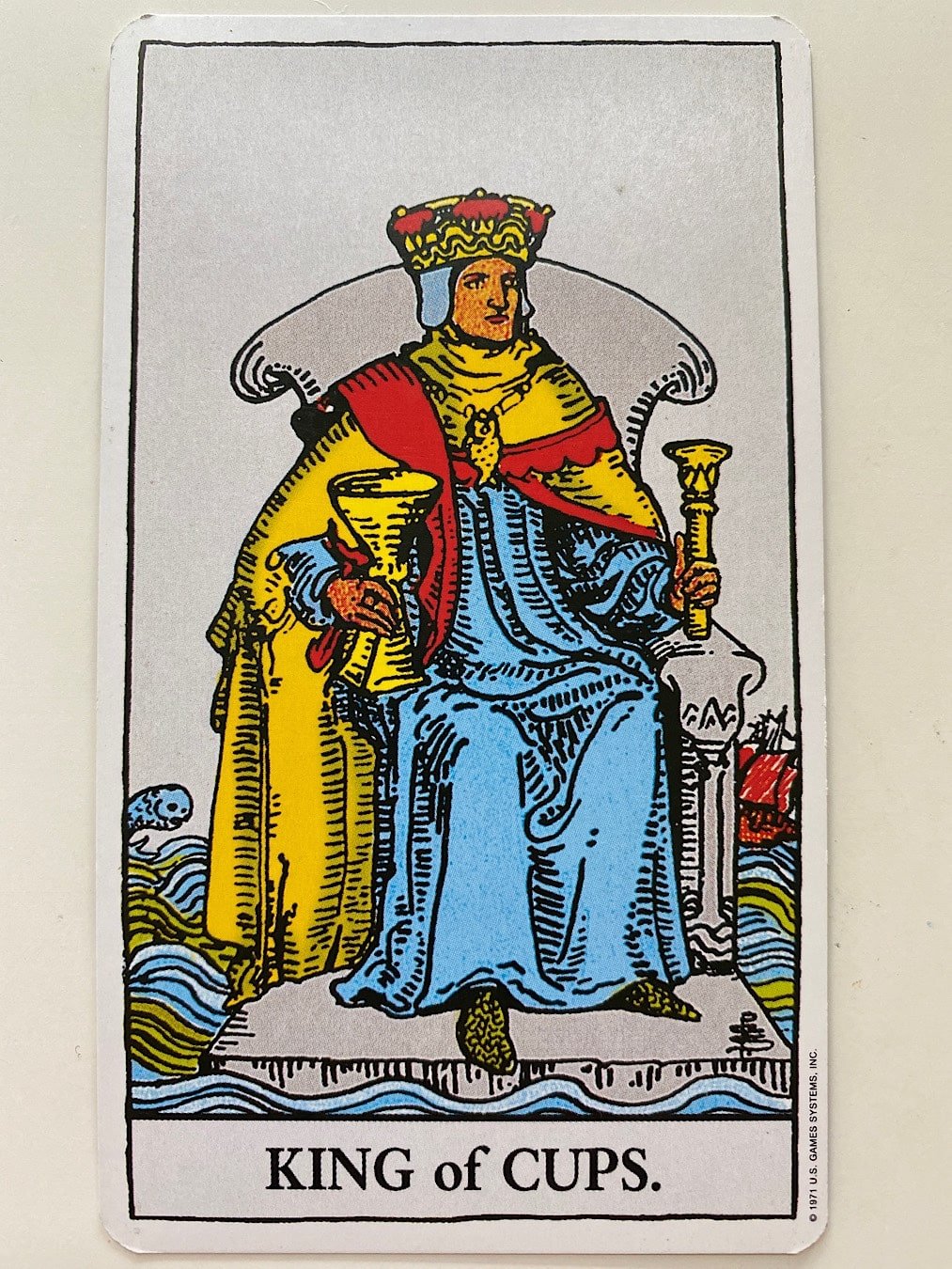 In the RWS we see a King sitting upon a stone throne, itself surrounded by ocean waves.

The King of Cups wears a yellow and red cape and holds a cup in one hand and a scepter in the other. He has a golden fish necklace. In the background, we see a jumping fish and a sailing ship.

From an elemental perspective, Air and Water are neutral with respect to each other. But when we look at the solidity of the stone throne contrasted with the fluidity of the waves surrounding him, we see that the King of Cups represents a combination of both the firm and the fluid.

In other words, he has mastered his emotions without lapsing into logical numbness. The golden fish around his neck is the same fish leaping out of the cup in the Page of Cups. Recall, this fish is a messenger from the unconscious.

But with the golden necklace, we can see that the King of Cups has not only received the message from the unconscious but firmly grasped its meaning and integrated it into the order of his life.

The fish is also a symbol of Christianity, another nod at the subtle Christian esotericism hidden throughout the Rider-Waite-Smith Tarot.

And yet, despite the crystalized fish around his neck, in the background we see a live fish jumping out of the water. Symbolically, this tells us that although the King of Cups has managed to impose order on the world of emotions there is nevertheless a creative dynamism that is wild and uncontrollable.

As C.G. Jung once said, “It does not seem to have occurred to people that when we say “psyche” we are alluding to the densest darkness it is possible to imagine.”

This densest darkness is the bottom of the ocean, where monsters still dwell and great waves form.

As an Air card, the King represents the Rational Mind but as the King of Water, he represents the creative depths of the unconscious mind. The King of Cups reminds us that a synthesis between these opposites is not only possible but leads to social status and power. 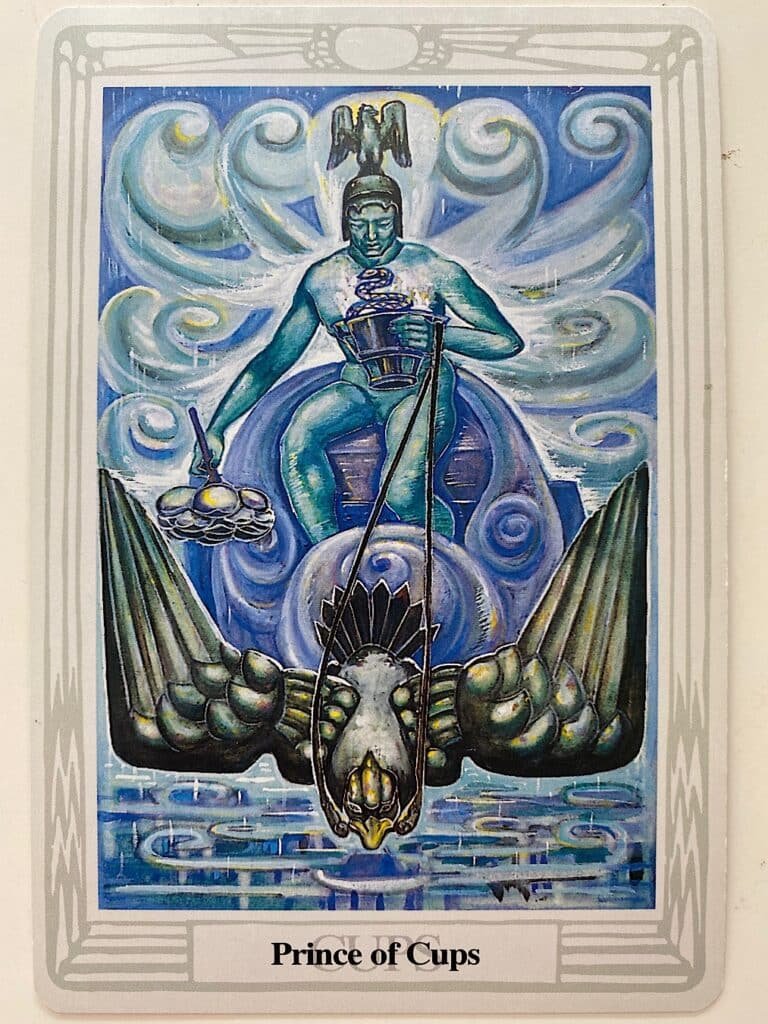 In the Thoth Tarot, we see the King of Cups as the Prince of Cups, who rides a chariot drawn by an eagle.

In his right hand he holds a lotus flower, “sacred to the element of Water,” and in his left hand, he holds a cup out of which emerges a serpent.

The Prince of Cups wears a helmet, upon which is another eagle.

Crowley says that a third totem animal, the scorpion, is not shown in the picture because, as a symbol of putrefaction, it is an “extremely secret process.”

Moreover, Crowley says, “The whole symbolism of this card is exceedingly complicated, for Scorpio is the most mysterious of the Signs, and the manifested portion of it symbolized by the eagle is in reality the least important part of his nature.”

Furthermore, he says, “The moral characteristics of the person pictured in this card are subtlety, secret violence, and craft. He is intensely secret, an artist in all his ways. On the surface, he appears calm and imperturbable, but this is a mask of the most intense passion.”

Accordingly, we can see that Crowley takes his description almost directly from the Golden Dawn’s Book T, which describes the Prince of Cups as “subtle, violent, crafty and artistic; a fierce nature with calm exterior.”

And this makes sense from an elemental perspective. One might imagine a light breeze of rationality and balance (Libra) blowing across a calm body of water. But beneath the surface rages the full intensity of the ocean and all its mystery. And when the Air blows fierce, the calm ocean can turn into a waterspout, hurricane, or Tsunami.

Crowley describes the Prince of Cups as akin to the power of steam. Calm when released into the wide expanse of the Air. But when condensed and pressurized, can generate enormous power.

From Book T – The Prince of the Chariot of the Waters

A WINGED Kingly Figure with winged crown seated in a chariot drawn by an eagle. On the wheel is the symbol of a scorpion. The eagle is borne as a crest on his crown, cuirass and buskins. General attire like King of Wands. Beneath his chariot is the calm and stagnant water of a lake. His armour resembles feathers more than scales. He holds in one hand a lotus, and in the other a cup, charged with the sigil of his scale. A serpent issues from the cup, and has its head tending down to the waters of the lake. He is subtle, violent, crafty and artistic; a fierce nature with calm exterior. Powerful for good or evil but more attracted by the evil if allied with apparent Power or Wisdom.

If ill dignified, he is intensely evil and merciless. He rules from 20 Degree Libra to 20 Degree Scorpio.

Prince and Emperor of Nymphs or Undines