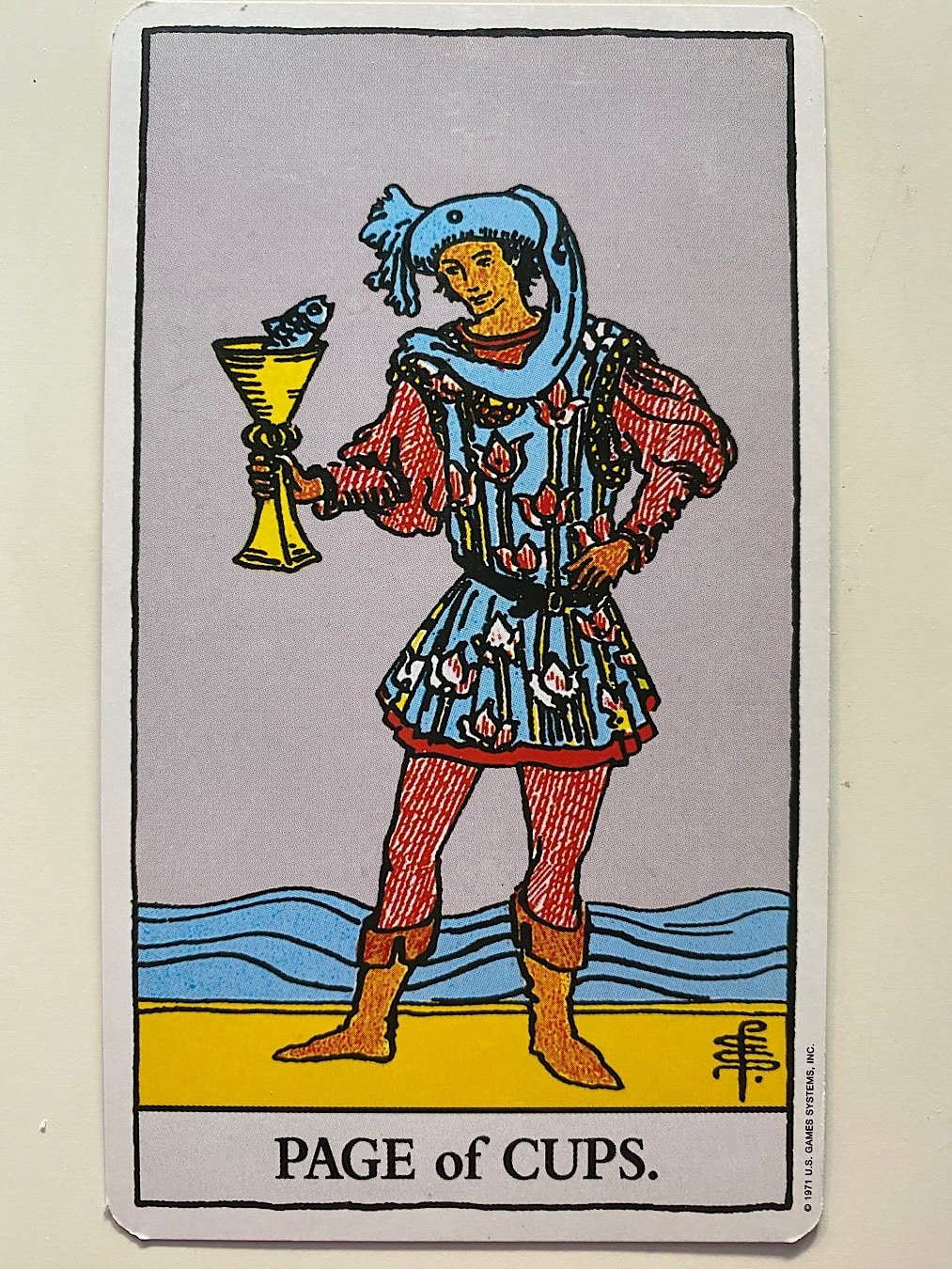 In the RWS, the Page of Cups is a young dandy standing by the sea, wearing flamboyant clothing and holding a cup with a fish in it.

The Page is dreamy and creative, with an active imagination. Is the fish really there? Or is he just lost in a dream?

Regardless, the fish is like a messenger from the unconscious, bringing us news from the depths of our minds. What we choose to do with that information is up to us.

Many people don’t take the Page of Cups seriously due to his youth. They dismiss his dreams as mere fantasies. Yet the Page of Cups is attuned to his unconscious and thus operates on a dream-logic more ancient than that of rational consciousness.

It would be foolish to dismiss this aspect of ourselves.

Freud used the metaphor of the iceberg to model the mind. Consciousness is the tip but the bulk of the iceberg is underwater, in the depths of a cold, dark ocean.

Effective Tarot reading requires us to learn to explore these depths or at least be receptive to its messengers (like the fish) who spring forth to give us information. But these messages are often cryptic and steeped in metaphor: they require interpretation.

But since Tarot is at its core a practice of interpretation, a practice of hermeneutics, it makes for an excellent tool for honing our intuition and attuning ourselves to the unconscious mind.

If you get the Page of Cups, looks towards reconnecting with your unconsciousness. Engage in stream of consciousness writing, or meditative, or start a habit of writing down your dreams.

Pay attention to those little signs of meaning and synchronicity; they are messages from your unconscious. When we are out of sync with our unconscious mind, we lack the fullness of integration.

But on the other hand, do not let your imagination get the best of you. Because the Page of Cups is so inexperienced, he is often unable to sort out fact from fiction, and can get lost in fantasies that end up undermining his ultimate goal.

If you want to be fully integrated, you will need to continue in your journey to becoming the Queen or King of Cups, where experience provides a filter to sort through the noise and connect us with the genuine messages from the unconscious.

But because the unconscious is wholly Other, there will always be a sense in which it acts independently from us, and thus represents true wilderness. But it is possible to confront the unconscious and learn from it, though genuine confrontations are rare. More likely, we get little signs and symbols, like dreams, or synchronicities, that speak to a deeper world of meaning. 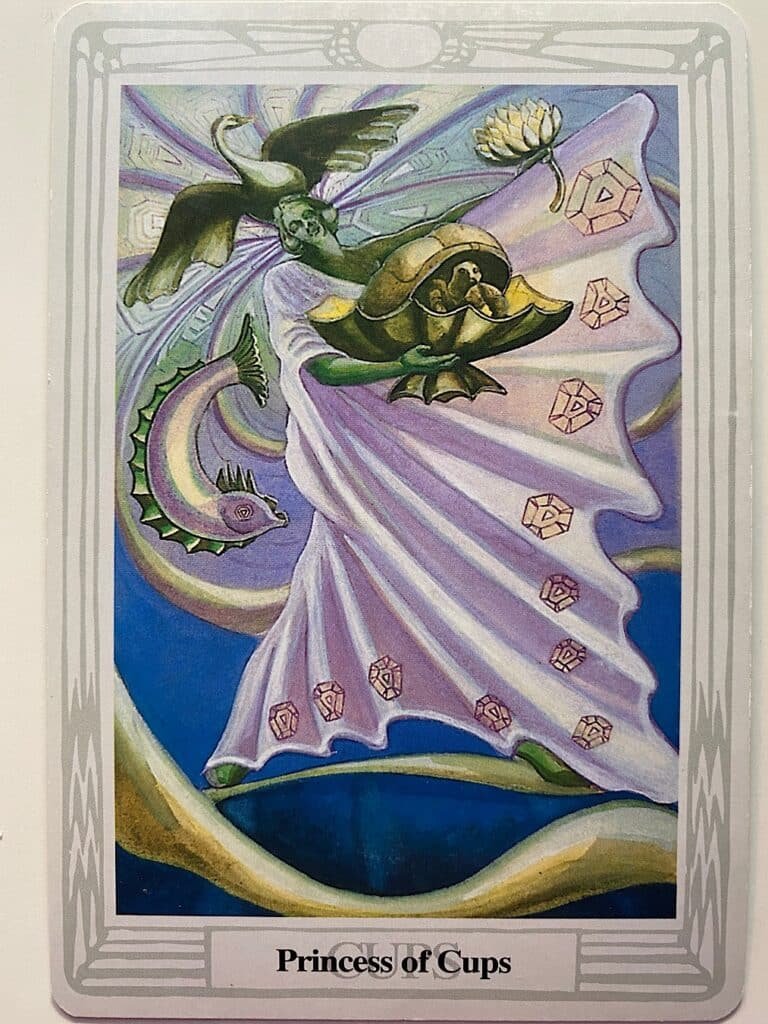 In the Thoth Princess of Cups, we see an underwater Princess with a flowing dress with 11 jewels at the bottom, holding a tortoise in a large Cup, surrounded by a fish, a swan, and a white flower.

Crowley says, “The character of the Princess is infinitely gracious. All sweetness, all voluptuousness, gentleness, kindness and tenderness are in her character. She lives in the world of Romance, in the perpetual dream of rapture. On a superficial examination she might be thought selfish and indolent, but this is a quite false impression; silently and effortlessly she goes about her work.”

As the Earth of Water, Crowley believes that the Princess of Cups is about the capacity of Water to articulate into crystal form, like a saturated solution of water forming crystals.

He says, “She represents the power of Water to give substance to idea, to support life, and to form the basis of chemical combination.”

As Water, the Princess of Cups represents the virtual potential of Water to hold all possibilities and then through a process of realization for articulations of reality (the jewels on the dress) to form.

In other words, it represents the process of structure forming out of the Life-giving potential of Water.

From Book T – The Princess of the Waters; The Lotus of the Palace of the Floods

A Beautifiul Amazon-like figure, softer in nature than the Princess of Wands. Her attire is similar. She stands on a sea with foaming spray. Away to her right a Dolphin. She wears as a crest a swan with opening wings. She bears in one hand a lotus, and in the other an open cup from which a turtle issues. Her mantle is lined with swans-down, and is of thin floating material.

When ill dignified she is selfish and luxurious. She rules a quadrant of the heavens around Kether.

Princess and Empress of the Nymphs or Undines

Throne of the Ace of Cups.