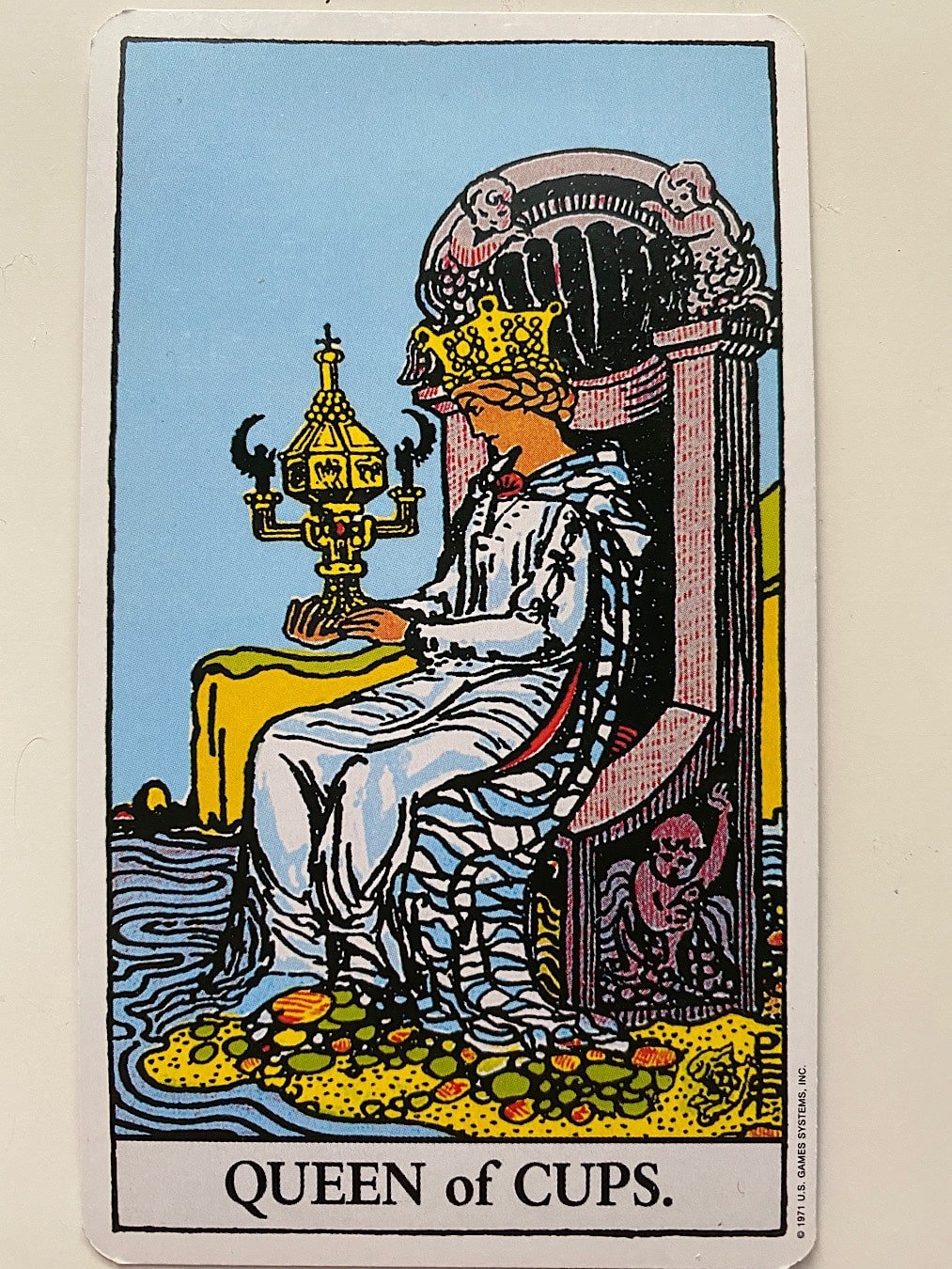 Keywords: intuitive, psychic, in tune with emotional, willing to help, giver of good advice, confident in herself, in tune with the unconscious, introspective, comforting

In the RWS we see a queen in profile, sitting on a stone throne covered in mermaids. The Queen of Cups is wearing a blue dress with a water cloak that looks like ocean waves. She wears a gold crown and she gazes deeply into a large, elaborately decorated golden cup in her hands.

The cup is similar to the cup of the Ace of Cups, which, recall, is a gift from God into which pours the Holy Spirit itself.

On the cup the Queen is holding are two angels, messengers of God. Thus, the card is suggestive of divine inspiration.

The cups are all about intuition and creative dreaming, but the Queen of Cups represents the pinnacle of intuitive receptivity: sensitivity to the divine. And if you are atheistic in your outlook, simply substitute “unconscious” for “God,” for it makes no difference: therein lie the gods.

Waite describes the Queen in his Pictorial Key as, “Beautiful, fair, dreamy–as one who sees visions in a cup. This is, however, only one of her aspects; she sees, but she also acts, and her activity feeds her dream.”

She is the Queen after all. She is not a young princess or page who idly dreams but does nothing.

One must have a clear, passionately felt vision that is accompanied by obsessive desire. But until one takes those desires and connects them to action, they will be idly.

But the nature of such inspiration is to compel you to action. So if you do have what some New Thought writers call your Definite Chief Aim, you cannot help but act.

And the success of your action, however small, will reinforce your desire, creating a virtuous feedback loop. 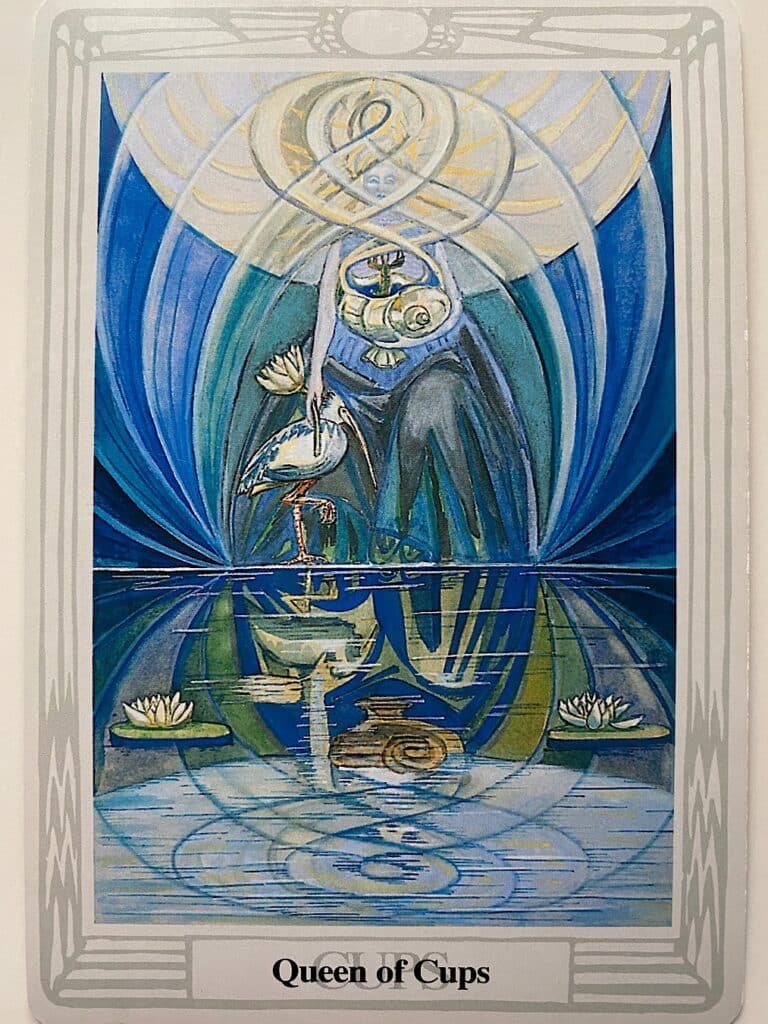 In the Thoth Queen of Cups, we see a pale blue Queen holding an ornate cup in one hand and holding a Lotus in another. She stands in front of a pond. Radiating around her are undulating waves.

Out of the cup the Queen holds emerges a crayfish, the same one we see on the Moon. This is the messenger from the underworld, who carries us through the dark night of the soul until we can again see the daylight of waking consciousness.

Crowley says, “Her image is of extreme purity and beauty, with infinite subtlety; to see the Truth of her is hardly possible, for she reflects the nature of the observer in great perfection…The characteristics associated with this card are principally dreaminess, illusion, and tranquility. She is the perfect agent and patient, able to receive and transmit everything without herself being affected thereby.”

We see the emphasis on reflectivity in the card, where the Queen’s image is reflected in the tranquil waters of the water.

This reflected light is similar to the way in which the Moon subtly reflects the light of the Sun.

The Queen of Cups is akin to a medium through which others speak, especially the voices of the gods. As Water, she bends and adapts around water is placed into her psyche, and yet, as we know, Water itself can be a powerful force when directed and coordinated together, as in a Tsunami.

The Queen of the Thrones of the Waters Queen of Cups

A Very beautiful fair woman like a crowned Queen, seated upon a throne, beneath which is flowing water wherein Lotuses are seen. Her general dress is similar to that of the Queen of Wands, but upon her crown, cuirass and buskins is seen an Ibis with opened wings, and beside her is the same bird, whereon her hand rests. She holds a cup, wherefrom a crayfish issues. Her face is dreamy. She holds a lotus in the hand upon the Ibis.

She is imaginative, poetic, kind, yet not willing to take much trouble for another. Coquettish, good-natured and underneath a dreamy appearance. Imagination stronger than feeling. Very much affected by other influences, and therefore more dependent upon dignity than most symbols. She rules from 20 Degree Gemini to 20 Degree Cancer.

Queen of Nymphs or Undines.