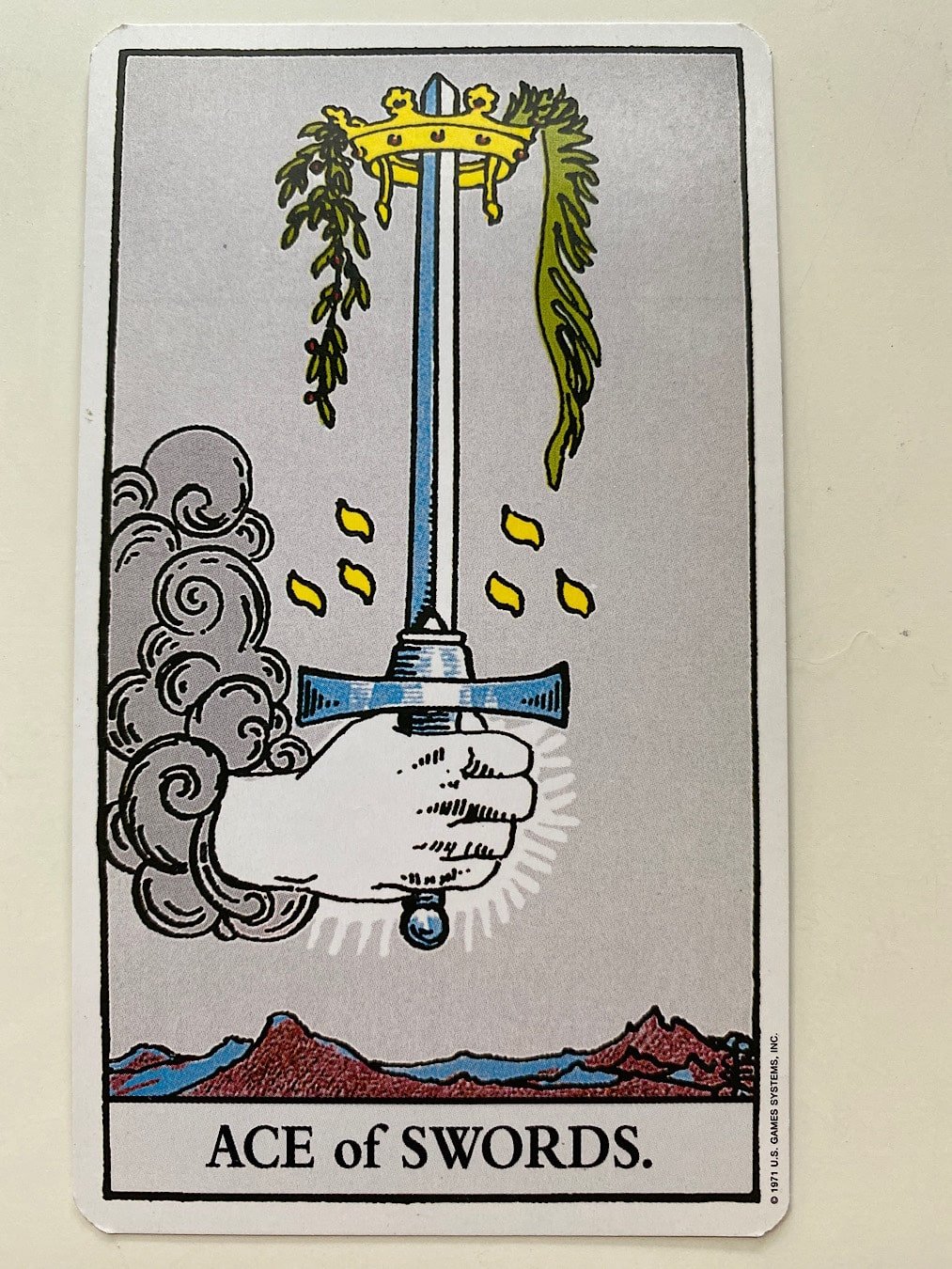 In the Pictorial Key to the Tarot, Waite says, “It is a card of great force, in love as well as in hatred. The crown may carry a much higher significance than comes usually within the sphere of fortune-telling “

The crown at the top of the Ace of Swords is the same crown we see falling off the top of The Tower as lightning strikes it.

The crown is a symbol from Hermetic Qabalah and represents the First Sephiroth, Kether. Kether is similar to the concept of The One from Neoplatonism. The One is the All, or God, in their purest form, Unified beyond all concepts of manifestation and particularization.

It is even not appropriate to say that Kether exists, for The One is beyond the very distinction between existence and non-existence.

This concept of a greater unified whole beyond the particular/universal distinction is what philosophers call a “transcendental” concept: it goes beyond the limits of concepts themselves and forms a barrier that the human mind cannot go beyond because the human mind is necessarily limited to non-transcendent thoughts.

We cannot even say the Ace of Swords is necessary, for it is beyond the necessary/contingent distinction.

It is beyond all these concepts. We literally cannot ascribe any property to it.

But how do we know it exists? Because the existence of many particularities implies their sharing the property of “being particular,” which is itself a universal property.

But what then unites all universal properties? A greater unity. The One. It is everything and nothing.

And this potentiality is the same potential of the Fool. This is the essential equation of the Tarot: +1 + -1 = 0.

It is from the “0” beyond Kether, pure Nothingness itself, unknowable and incomprehensible to the human mind, that emerges all emanation.

It is this emanation, the Lightning of the Tower, from comes from Nothingness and emanates all reality into manifest existence. It is through this successive hierarchy of overlapping emanation that reality unfolds, including that of Logos or Reason itself.

It is this dimension of emanation that the Ace of Swords concerns itself with.

The yellow leaves falling from the crown are the Hebrew letter Yod, which is the first letter of the Tetragrammaton, the Name of God, YHWH, or Yahweh, aka The One. This is the hidden meaning of the Ace. 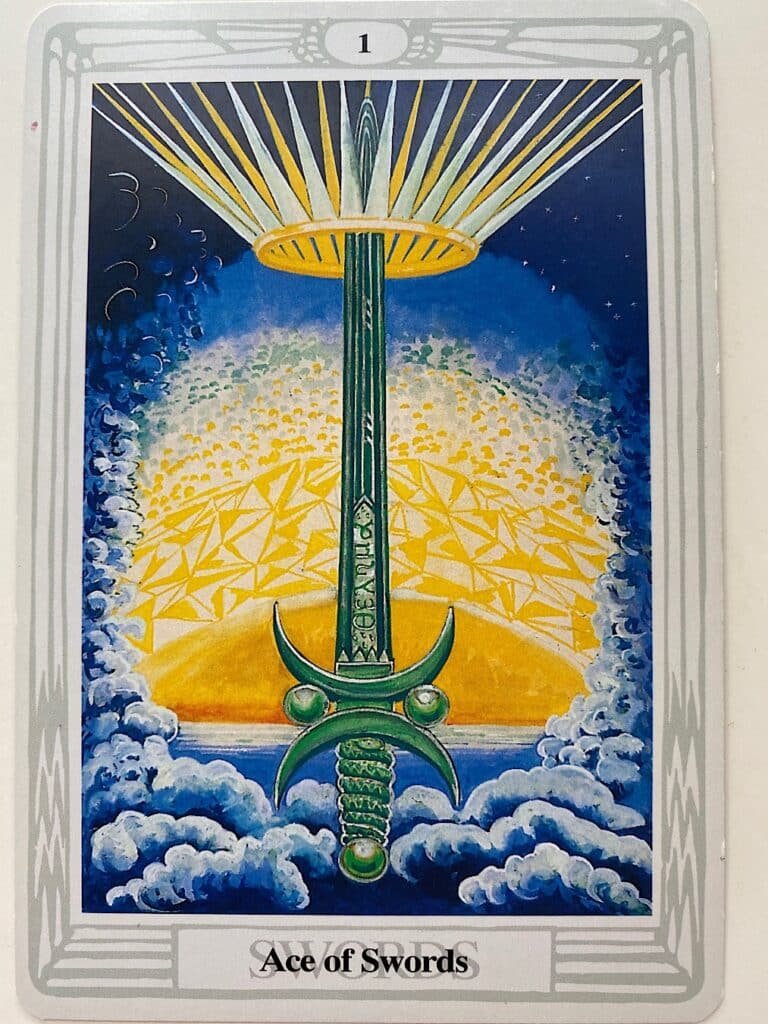 Like the Rider-Waite-Smith, the Thoth Ace of Swords also has a crown at the top of the Sword, which is the Sword of the Magus. This crown is made of 22 rays of pure Light. 22 is the number of Hebrew Letters in the Hermetic Qabalah and also the number of the Major Arcana in the Tarot.

22=2×11, which Crowley describes as “The Magical manifestation of Chokmah, Wisdom, the Logos.”

Accordingly, the blade of the Sword is inscribed with the World of the Law, “Thelema,” Crowley’s personal religious philosophy based on his religious experiences laid down in his Book of the Law.

Crowley says, “This Word sends forth a blaze of light, dispersing the dark clouds of the Mind.”

We can see these clouds around the edge of the Ace of Swords, revealing the bright yellow Sun of Christ-consciousness in the middle.

Christ is Logos, or the Word. And Christ is Tiphareth. Thus, we see the Ace of Swords clear the clouds of the mind to reveal the highest state which human consciousness can ascend up the middle pillar.

Crowley says, “And is not Air, the element attributed to Mercury, also most properly the Breath of Life, the Word, the Logos itself?”

In terms of concrete dynamics, Crowley says, “There is indeed a notable passivity in its nature; evidently, it has no self-generated impulse. But, set in motion by its Father and Mother, its power is manifestly terrific. It visibly attacks its objective, as they, being of subtler and more tenuous character, can never do. Its ‘all-embracing, all-wandering, all-penetrating, all-consuming’ qualities have been described by many admirable writers, and its analogies are for the most part patent to quite ordinary observers.”

What sort of analogy? Ordinarily, the Air is passive, blown this way or that. Yet when focused, a strong gust can blow away anything in its path.

Yet it is subtle. We cannot even see it. We breathe it automatically to survive yet the conscious control of breath is also a pathway to enlightenment emphasized by almost all ancient spiritual traditions.

The Air embraces everything, filling up whatever space is available. It penetrates through everything and into every nook and cranny.

It is subtle like thought itself, which can also penetrate into every nook of the Universe.

A White Radiating Angelic Hand, issuing from clouds, and grasping the hilt of a sword, which supports a White Radiant Celestial Crown; from which depend, on the right, the olive branch of Peace; and on the left, the palm branch of suffering.

Six Vaus fall from its point. It symbolizes “Invoked,” as contrasted with Natural Force: for it is the Invocation of the Sword. Raised upward, it invokes the Divine crown of Spiritual Brightness, but reversed it is the Invocation of Demonic Force; and becomes a fearfully evil symbol. It represents, therefore, very great power for good or evil, but invoked; and it also represents whirling Force, and strength through trouble. It is the affirmation of Justice upholding Divine Authority; and it may become the Sword of Wrath, Punishment, and Affliction.