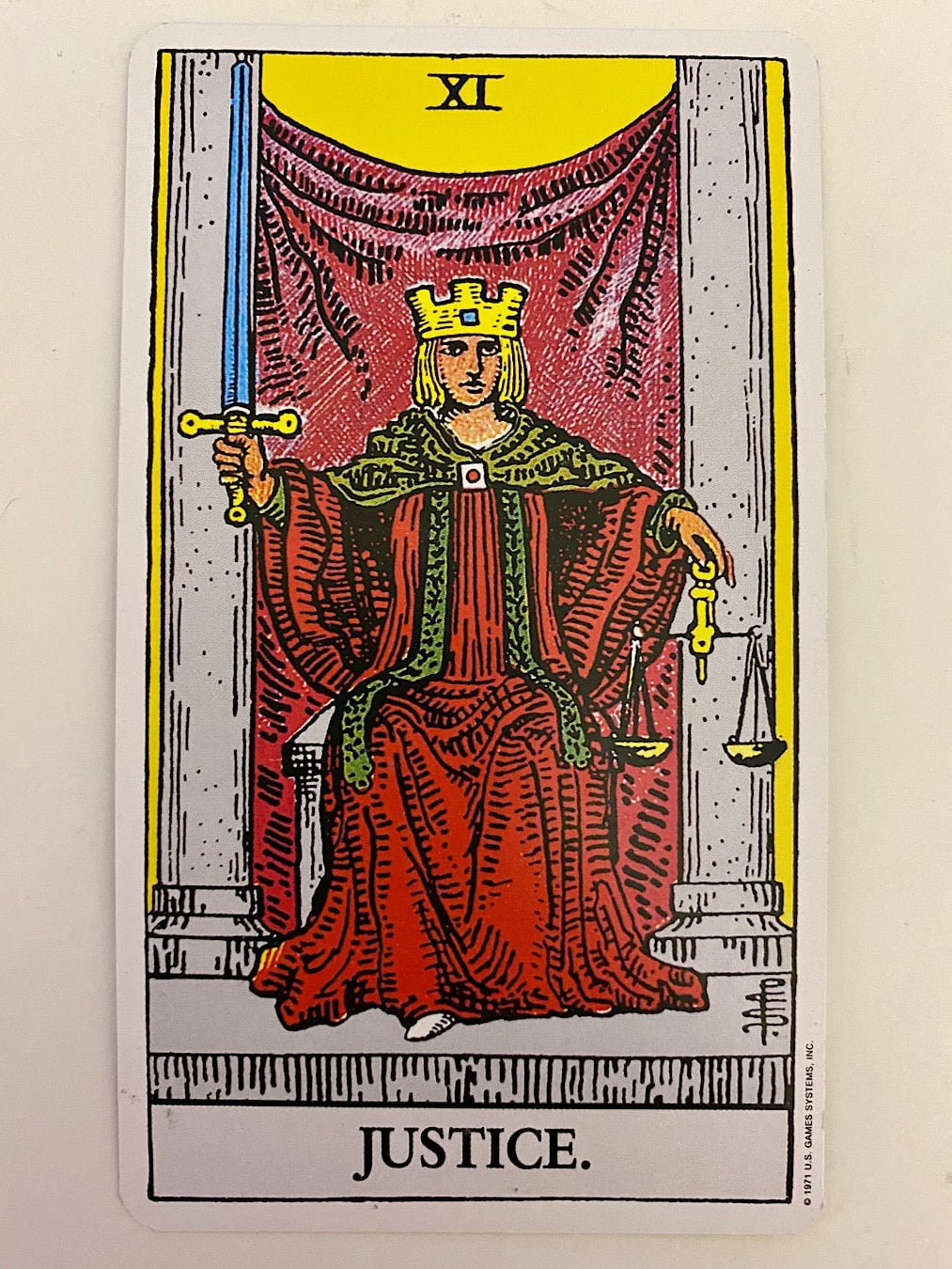 In the RWS, we see Lady Justice sitting upon a throne wearing green and red robes. In her Right hand is a sword and in her left is a set of scales.

As the embodiment of Libra, Justice is a representation of balance and order. She represents the ideals of fairness in our government and society.

As Lady Justice, she is said to the greek goddess of justice Astraea.

Like the High Priestess, she sits between two pillars, which are equivalent to the two columns of the Tree of Life. Accordingly, from an esoteric perspective, Justice represents the equilibrium between the two poles of masculinity and femininity.

However, whereas the High Priestess deals with the spiritual world of “fairy gifts and the high gifts and the gracious gifts,” which are an utter mystery, the Laws of Justice are more down to Earth and involve, as Waite says, “the moral principle which deals unto every man according to his works.”

But beyond the symbolism of goddesses, Justice is straightforwardly the embodiment of one of the Four Cardinal Virtues: Justice, Temperance, Prudence, and Fortitude. Only the symbol of Prudence is lacking from the Major Arcana (with maybe the exception of The Hermit).

The Adjustment Tarot card is what Crowley called “Justice.” It’s all about balance and equilibrium.  Justice is one of the four virtues (Justice, Temperance, Fortitude (Strength/lust[for life]), and Prudence (Hermit).

In the Thoth Tarot, Justice is known as “Adjustment” and is switched place with VIII (Strength/Lust). The significance and justification of this switch is explained here.

In regard to the name change from the Rider-Waite-Smith, Crowley says,

“This card in the old pack was called Justice. This word has none but a purely human and therefore relative sense; so it is not to be considered as one of the facts of Nature. Nature is not just, according to any theological or ethical idea; the Nature is exact” (Book of Thoth, p. 86)

However, although Nature is exact, “Nature is not the grocer weighing out a pound of sugar; it is the compensation of complicated rhythms.” (Crowley to Harris, December 19, 1939, quoted in Understanding Aleister Crowley’s Thoth Tarot, p. 118).

The Figure of Balance, adorned with the ostrich plumes of Ma’at, the Egyptian goddess of Justice,  stands between a scale with Alpha on the left and Omega on the right. In the Egyptian story, Ma’at guards the gates into the Afterlife and requires you to place your heart on a scale balanced against a feather, ensuring the purity of your soul and guaranteeing cosmic Justice. As a Name of the Christian God, Alpha and Omega represents the idea of balance between the beginning and end of the Fool’s Journey, starting from 0 (The Fool) and ending at 21 (The Universe).

The woman in Adjustment is holding a Magic Sword, which she uses as an “operation of manifestation.”

As the representation of Libra, Cardinal Air, exalted in Saturn, ruled by Venus, Libra represent a process of balance between the loving, beautiful, and harmonious qualities of Venus and the restrictive properties of Saturn. The emotional energy of Venus is balanced perfectly against the intellectual energy of Cardinal Air.

Crowley calls her “The Woman Satisfied” i.e. the female complement of active male energy finding its completion in the sexual act. In this sense, Crowley is keeping step with the traditional heteronormativity of the Tarot.

Adjustment represents the process of equilibrium. Like a thermostat set to 75 degrees, if it gets too cold, it kicks on the heat and vice versa if it gets too hot. In a physical sense, this card represents the Newtonian principle of “For every action there is an equal and opposite reaction.” Crowley says of this Card, “It is impossible to drop a pin without exciting a corresponding reaction in every Star.” (p. 87)

In this balance of actions and reactions, Crowley says, “All things are harmony and beauty; all things are Truth: because they cancel out.” (p. 87)

In The Book of Thoth, Crowley claims Adjustment is the feminine component of the Fool, since the corresponding Hebrew letter of the Fool and Adjustment (ʼAlef and Lamed) constitute the “secret key of the Book of the Law” (Crowley’s Inspired text). Unfortunately, Crowley states “The details of this system have not yet been revealed” (Book of Thoth, p. 86).

Lon Milo DuQuette attempts to give a formulation:

“The combined Hebrew letters these cards represent, Aleph and Lamed, spell AL and enumerate to 31. AL is the root of the Hebrew word for “God”; LA is the Hebrew word for “not.” In the Western Zen of Thelema, “God-Not-God” is a very important concept.” (Understanding Aleister Crowley’s Thoth Tarot, p. 119)

Other Justice and Adjustment Tarot Meanings