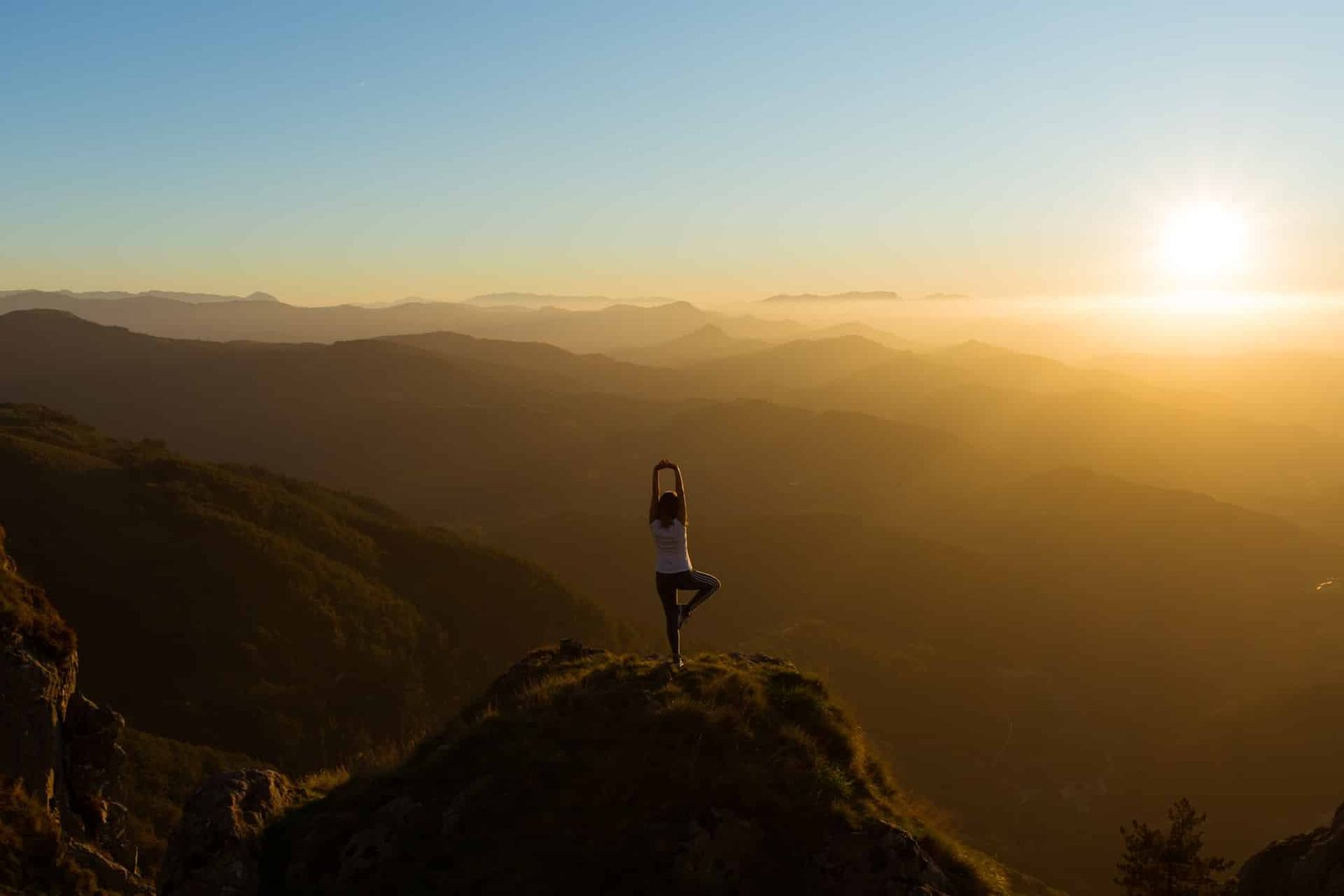 Recently I fucked up my back, causing severe pain and limiting my mobility and capabilities. This in fact was a blessing in disguise for it was a wake-up call for me to get back in touch with my body, which I had been neglecting for many years since I started working in corporate America as a remote-worker desk jockey with a sedentary lifestyle. This post is about how I discovered a connection between Yoga and Christianity that as has set me on a spiritual path of healing, and ultimately, liberation.

As I was in agonizing pain and reflecting on how I reached rock bottom of my physical health at only 35 years old, I remembered how back in college and grad school I used to do a lot of yoga with my ex-wife and how great I felt. I was never super “into” yoga and I never really dived in super deep, but I enjoyed it and felt pretty good. However, I was mainly into strength training though back then.

In my reflections in the midst of pain, I had a revelation of sorts. I decided I would get back into yoga. I decided this would be an excellent path of healing. Yet it would be different this time, for I knew enough about yoga to know that the West’s conception of yoga as a method of physical fitness and stress relief is but scratching the surface of the true history of traditional yoga.

So I started digging. And digging. And reading. And studying. I learned about the origins of yoga. I read the Yoga Sutras of Patanjali. I started studying Hinduism and its relationship to yoga. I learned that there are many different types of yoga, with the postural or physical (asana) side of yoga being a very small slice of what yoga entails.

I was quickly overwhelmed by the complexity of this vast and rich spiritual tradition, which stretches back well over 5,000 years, making Hinduism the oldest religion in the world. And yoga itself has been deeply embedded into this tradition since its inception.

What impressed me is how practical and scientific yoga is. The Yoga Sutras of Patanjali, roughly 2,000 years old give or take, is considered the Bible of Yoga and it is imminently practical. It can be considered a science of consciousness or science of mind, a systematic distillation of thousands of years of experimentation by charismatic yogis seeking liberation or Self-realization and passing their experimental findings from teacher to student. It is indeed a science of spirituality.

What struck me about yoga and Hinduism, in general, is that from its beginning it has been pluralistic and nondogmatic. There has never been a Hindu or Yoga Pope who dictated a rigid dogma that must be followed. Hinduism has always recognized the validity of many paths, saying there is One Truth, but Many Paths. It is an incredibly tolerant spiritual tradition. Indeed, it is not really a “religion” in the same way orthodox Christianity is, with its emphasis on correct belief. It is more akin to a way of life, or life philosophy set on the intention of personal, experiential liberation.

Indeed, Hinduism and Yogic philosophy emphasize a path of personal liberation or Self-realization. The goal is not to believe a certain set of beliefs. The goal is not to hold the right orthodox belief. The goal is to liberate yourself and realize the ultimate Truth about the Self and God in your own experience. Yoga is the practical methodology about how to achieve this.

While yes, there is a definite metaphysical system underlying the Yogic system, this in fact accords with much of what I already hold to be true in virtue of my studies of the Western Esoteric Tradition.

I do not proclaim to be an expert in this at all, far from it in fact, but in a nutshell, I would summarize the Hindu metaphysics as saying that behind the multiplicity and plurality of mental and physical facts lay a singular Ultimate Reality that is Eternal, Unified, Unchanging, Perfect, Blissful, and Purely Conscious (without any content). This is Brahman, the Absolute Reality. It is the Absolute Ground of Being, but beyond all predicates, all existence, beyond all description or categorization, absolutely transcendental to all mental or physical reality. It might be called The One, The All, The Supreme Soul, the Supreme Self, The Oversoul, God, etc. But ultimately it is beyond name and form.

Furthermore, the goal of the spiritual seeker is to realize that our True Self is not our body or our mind or our ego but Atman, The Self, which is identical to The One, or Brahman, the Absolute Unchanging Reality. It is only ignorance that keeps us from recognizing that this is our True Self, that indeed All Is One, that this Absolute Reality of The One is the truest reality, and that the world we experience in our minds and the physical world is but an illusion.

There are some other metaphysical commitments of the Yogic/Hindu worldview such as the cycle of birth and rebirth and karma, but I won’t go into those, as they are beside the point of this brief essay. Much of this metaphysics is similar to some of the motifs from Hermeticism, Gnosticism, Neoplatonism, and Mystical Christianity, the core foundation of the Western Esoteric Tradition.

That’s all great and all, but where does Christianity fit into all this? Well, in his Yoga Sutras Patanjali outlines a systematic methodology to come to Self-realization or samadhi, which is experiential union in The One, cosmic union, mystical union, absorption into the Ultimate Reality, etc. It is really hard to capture in words as this state of being is impossible to capture in propositional language. It is beyond all predication and beyond all propositional thought. It can only be understood by means of direct experience.

But part of Patanjali’s methodology is concentration on a personal form of Pure Consciousness. In Hinduism, this would be Krishna, Shiva, Vishnu, or any of the infinite varieties of forms that Brahman might take as personal Gods. By concentrating on these personal Gods we can use them to bootstrap ourselves into a higher form of Self-realization that goes beyond the personal into the impersonal, into the Absolute, The Atman, Brahman. The personal Gods become a kind of stepping stone into a deeper, more subtle metaphysical Self-realization wherein we recognize that the spark of divinity is inside of us, that we are Divine, and that we ourselves are One With God, and that this has always been the case.

Moreover, as I mentioned before, in Hinduism there are many paths to liberation and Patanjali’s system of meditational yoga is but one path. Another popular path, perhaps the most popular path, is called Bhakti Yoga, which is the path of liberation through devotion and love of God. And it is certainly very much easier to be devoted to a personal representation of God than some super abstract transcendental reality beyond all form or name. Hence, Bhakti Yoga involves mantra, prayer, devotion, worship, ritual, and working with personal Gods.

Personally, I do not feel like I have to choose between either the path of meditation or the path of devotion. Why not both? It seems better to me to be well-rounded. But I do not quite feel comfortable worshipping Hindu Gods such as Krishna, etc. It’s not necessarily that I am worried about cultural appropriation. Hinduism is a universalist and welcoming tradition that encourages Westerners to respectfully engage in its traditions. The problem is that I just don’t have the cultural or linguistic context for that kind of Bhakti Yoga.

But many people have pointed out that Jesus Himself taught a form of Bhakti Yoga, saying the most important commandment is to love God with all your heart, and secondly, love your neighbor as you love yourself (which would be equivalent to karma-yoga, the path of selfless action.)

Moreover, I do enjoy all the paraphernalia surrounding Christianity like rosaries and Jesus candles and the majesty and grandeur of Christian architecture. Another important part of Bhakti Yoga is mantras, and I am quite fond of the Jesus Prayer.

So while I would not necessarily consider myself a “Christian,” I guess I am starting to realize that Jesus was just as much an avatar of the Absolute Reality (Brahman) as Buddha, Krishna, etc. And He fits into my cultural context and is thus a suitable “stepping stone” to a more transcendental Self-realization. And as I explained in my recent post about rejecting Christianity, I still very much want to focus my veneration on Nature Herself as the ultimate avatar of Brahman, especially Mother Earth (Gaia).

Yoga is not just a form of physical fitness. It is a way of life. It is a life path. It is something you embody in your entire life. You live and breathe yoga day in and day out. For the first time in a long time, I feel alive with possibility.

3 thoughts on “Yoga and Christianity: A Path of Liberation”