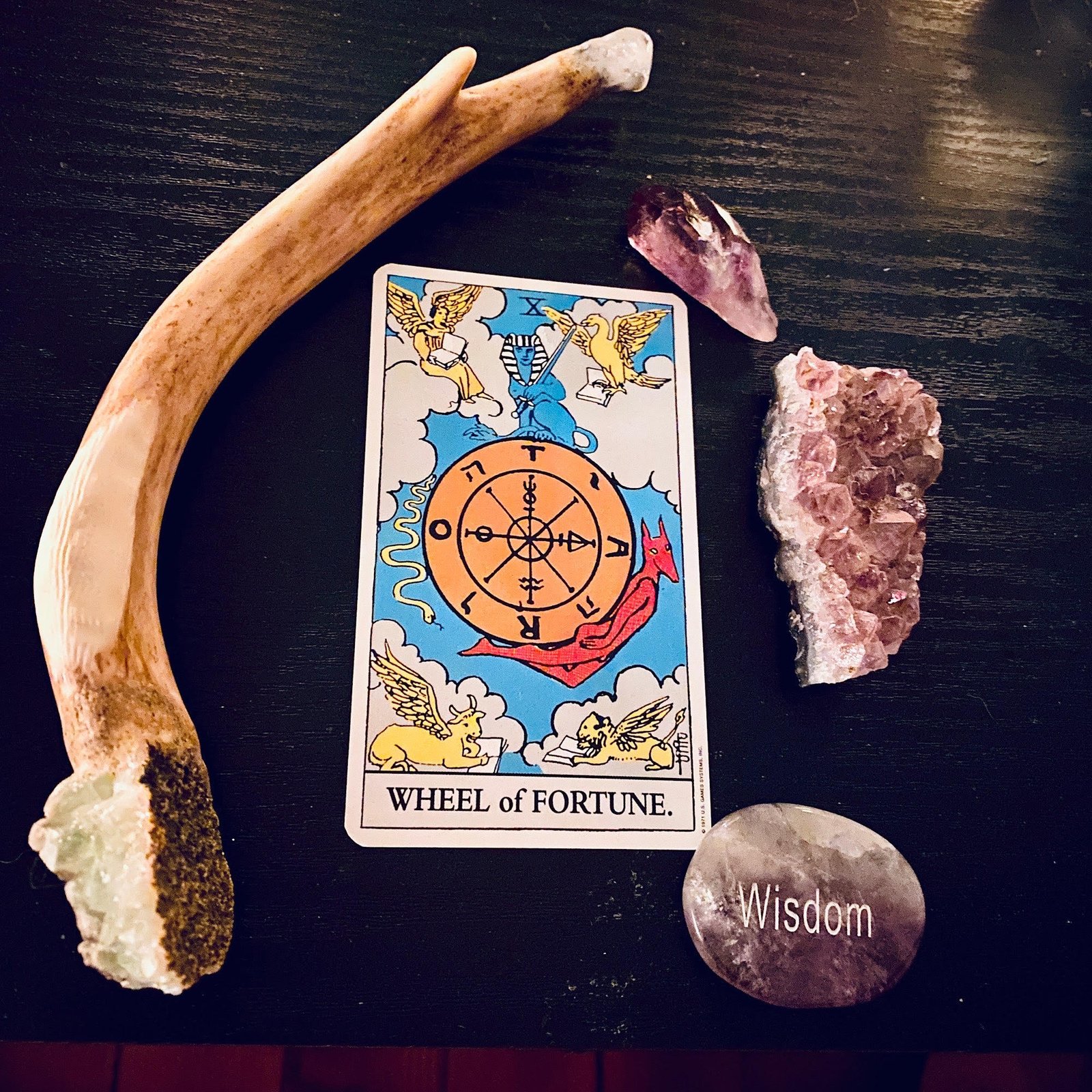 The Wheel of Fortune

In the Waite-Smith Wheel of Fortune we see a karmic wheel rotating, upon which we see the creatures of the Sphinx, Typhon (as a snake), and Hermanubis (the combination of Hermes and Anubis). The Wheel is taken from the Biblical vision of Ezekiel’s “Wheel Within a Wheel.”

Inscribed upon the wheel are the letters TARO and the four Hebrew letters of the Tetragrammaton aka the name of the Israel God YHWH.

The Wheel of Fortune represents change based on what has happened in the past (karma). Built into the card is the idea of a divine plan, of providence. It is important to read this card through the lens of past, present, and future.

The Wheel of Fortune is associated with Jupiter, “the Greater Fortune.” It is important to realize that Fortune is not always positive. The Wheel itself is represented by ten spokes, corresponding to the ten Sephiroth of the Tree of LIfe. The turning of the Wheel, therefore, represents the metaphysical flow of energy from the firmament of heavens down into the material realm

Upon the wheel, situated at the top, is the Sworded Sphinx, representing the element sulfur. The Sphinx is exalted at the top of the Wheel’s turn but as we know, like a water wheel, it goes on spinning due to the inevitable forces of the Universe. On the left side of the Wheel is Hermanubus, who represents the element of Mercury and is a composite of the Greek God Hermes and the Egyptian God Anubis, Hermes being the messenger of the Gods, traveling between the divine and mortal worlds, and Anubis being the God of Death and the underworld. On the right-hand side, moving downwards as the wheel spins, is Typhon, representing salt, the monstrous figure from Greek mythology, who represents the destructive power of typhoons, volcanos, and other energetic natural forces.

Taken together, the continuous turn of the Wheel of Fortune represents the natural Life Cycle of creatures, lives, Ideas, worlds, beings, and entities in general as manifested in the material world.

Furthermore, Crowley sees the Wheel as being like the Eye of Shiva, which represents the Third Eye capable of perceiving into the spiritual plane of existence, whose opening burnt up the passions of physical desire from within Shiva’s own mind.