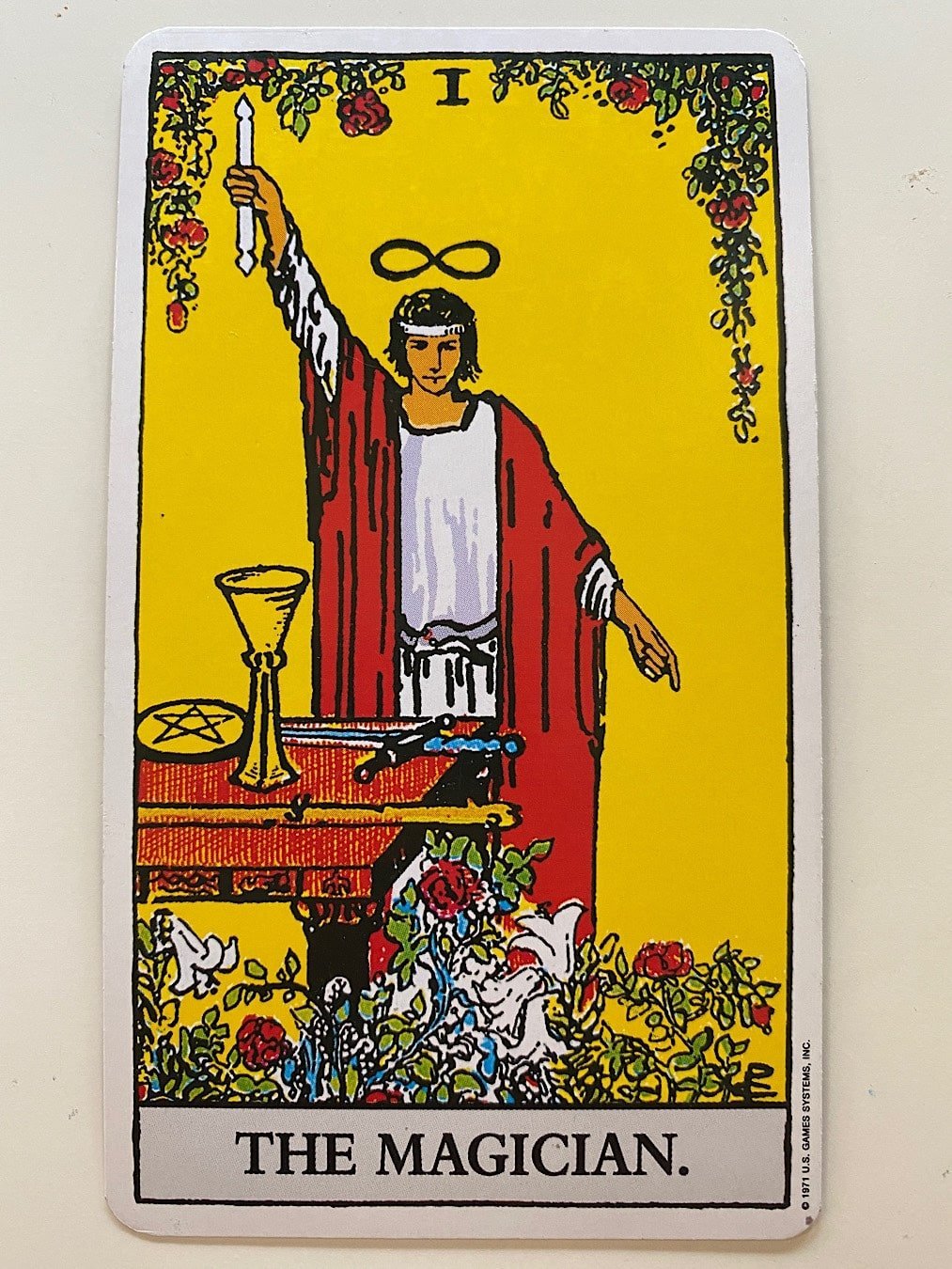 Other associations: Hermes, The Messenger of the Gods, the Word, Logos

Kether, The Crown, ruled by Pluto, the card which is spirit territorializing matter.

The Magician is the one who makes things happen through sheer force of Will in combination with his connection to Divinity. He has control of all elements and is able to harness these energies to manifest his Will. He embodies Crowley’s definition of magick as the “Science and art of causing change in conformity with the Will.”

In the Waite-Smith he is seen holding a double-sided wand, or baton, to the Heavens with his right hand with his left hand pointing towards the Earth. He is acting as a conduit for Heavenly Consciousness, manifesting the Mind of God into his personal reality by means of the four Magician’s tools he has on the table:

“The first Arcanum —the principle underlying all the other twenty-one Major Arcana of the Tarot — is that of the rapport of personal effort and of spiritual reality.” (p. 7)

-“In fact, the first and fundamental principle of esotericism (i.e. of the way of experience of the reality of the spirit) can be rendered by the formula:

Learn at first concentration without effort; transform work into play; make every yoke that you have accepted easy and every burden that you carry light!”    Meditations on the Tarot, p. 7-8

This Anonymous also comments on how the Magician is light and free  “My yoke is easy, and my burden is light” (Matthew 11:30).

In the Rider-Waite-Smith, the Magician has an infinity symbol over his head, representing his connection to the Divine.

The Robes of Red and White remind one of the Western iconography of Jesus.

Reversed: The reversed Magician is power corrupted, a jerk who uses his willpower and cunning to do wrong.

“Magic is a set of techniques and approaches which can be used to extend the limits of Achievable Reality.” Phil Hine, Condensed Chaos, p. 34

“A technique grounded in a belief in powers located in the human soul and in the universe outside ourselves, a technique that aims at imposing the human will on nature or on human beings by using supersensual powers” (Georg Luck, Arcana Mundi: Magic and the Occult in the Greek and Roman Worlds, 1987, p. 3,)

“Magicians manipulate their inner Imaginal world in order to affect both their growing understanding of the universe and their actions in the world.”(Harvey, Contemporary Paganism, p. 87-88)

“The essence of magic boils down to the application of two ordinary mental skills: attention and intention.” (Dean Radin, Real Magic, p. 73) 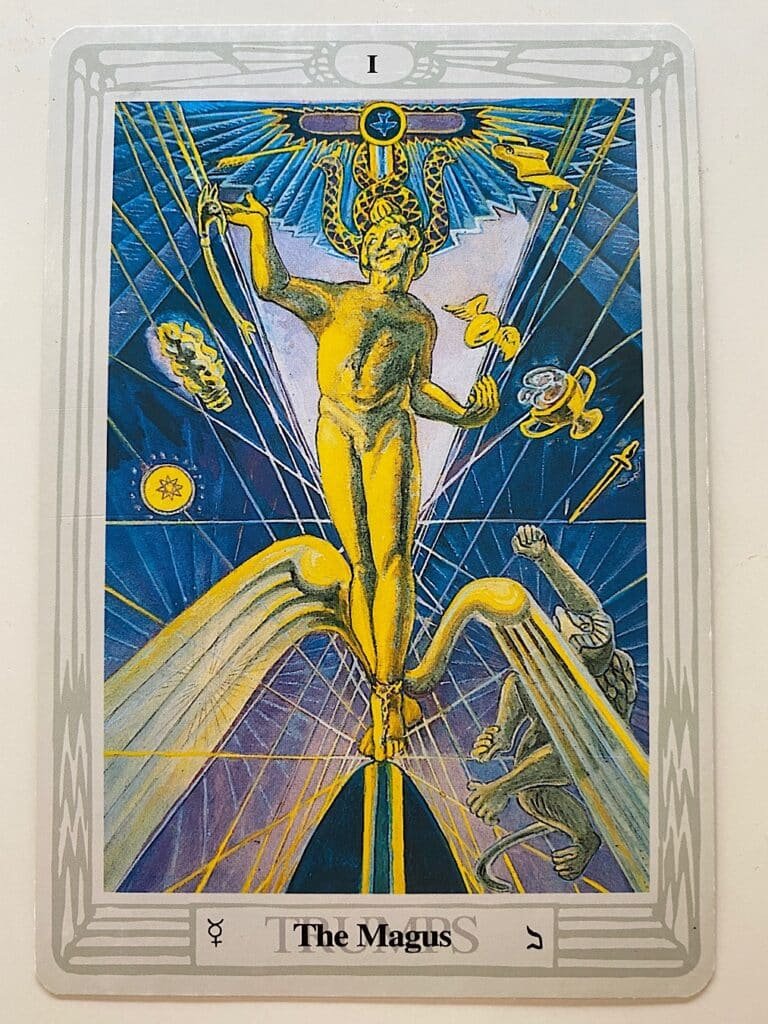 The Fool or The Juggler, as the Magician, is juggling: wand, cup, sword, and disc along with a style, papyrus, winged egg, and torch.

The winged egg represents the concept of +1 + -1 = 0 concept, which represents the cancellation of masculine and feminine into a nonbinary potential out of which is birthed the Great Adventure of the Hero.

As Crowley says in The Book of Thoth, “This card is the second emanation from the Crown, and therefore, in a sense, the adult form of the first emanation, the Fool, whose letter is Aleph, the Unity.”

As the adult form of the Fool, since the Fool is nonbinary, it follows that the Magician is also nonbinary.

Qabalistically, The Magician is the “Malkuth of the Unmanifest,” or, the lowest form of being beyond human comprehension, in some sense so low on the totem pole of Divinity that it becomes possible to imagine it in the context of the Tree of Life itself. The Magician thus represents the process by which the Unknowable becomes Knowable, the unmanifest made manifest. In using his tools of Magick, the Magician thus acts out and retells the story of something being created out of nothing, the Light being created out of the great potential of nothingness (the winged egg of the Magician).

Here we have the Logos, the Holy Spirit, represented by the 5th element of Aether, acting as the nonbinary Cosmic Egg that births Chokmah (Father) and Binah (Mother), and from these two is birthed the rest of the Universe (21). 2 + 1 = 3, or, the Supernal Triad. The Holy Spirit, the Mother, and the Father add up to 3 and are thus responsible for creating everything below the Abyss, the Seven Sephiroths that makeup 4-7. Seven is a natural spiritual Cycle.

The Principle of Nothingness (Zero) is the potential out of which we have the birth of the rest of the universe. Contained with the concept of Zero is -1 (negative) and +1 (positive) – which combine (“light shining in the darkness”) to make the light of humanity (feminine, masculine, nonbinary).

The negativity of the feminine is not negative in the pejorative space but is positive, just like the negative space inside a vessel is positive for it can be used to store something, like water. And when we pour that energy into the vessel, the vessel takes the formless energy and gives it form and the energy takes the shape of the vessel, not vice versa. In it is this sense that the softness of the ocean can eventually overtake any city of rock.

Thus, feminine, negative energy, the “restriction” of Binah (ruled by Saturn), is like the vessel: it “restricts” the form the energy can take, giving it shape, pooling it together to make it more powerful, and then pouring it out into the world, like the Star, Aquarius, the Water-bearer, who takes her overflowing cup and pours its energies into the reticulated structure of the world.

But the Tree of Life is just a model, a representation, it re-Presents what is beyond the phenomenal in terms of the phenomenal, such that we can never get out what Kant called the noumena, the thing-in-itself, living beyond the minds of humans.

In some sense then, perception itself, the way in which our understanding of the world is representational, becomes a metaphor for how we perceive God, or Kether. Because we think in analogies, we must always relate to God is if they are a person, and thus we use familiar figures such as our Father and Mother. It is only through the known that we can know the unknown. This is the central structure of analogic teaching.

The Tree of Life is then an analogy, it takes something known, something we can solidly Imagine in our Mind’s Eye and even draw out on paper, and use it as a conceptual tool to grasp the unknown: the Mind of God.

The order of analogic flow thus operates like this: