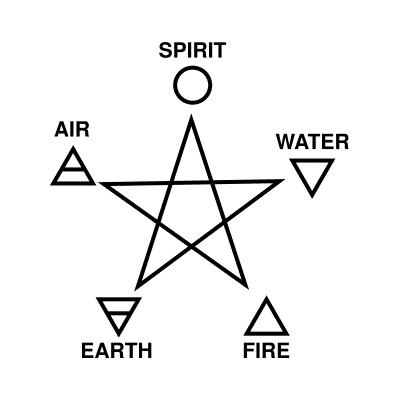 The Minor Arcana is split into four Suites:

Cups: ruled by Element of Water, emotionally energetic, intuitive, dreamy, passive and mobile but also dense and forceful when gathered in waves, feminine, receptive component of Yin in Yin-Yang dynamic, the realm of the psychic perception

Swords: ruled by Element of Air, mental energy, logical, rational, communicative, double-edged, swift and fluid but also subtly forceful when mobilized as a gust. They are what Taoism calls “The 10,000 Things” (labeling, categorizing) and Plato’s concept of “carving” things into nature and hoping you carved “at the joints”.

Aristotle on the Elements:

In this figure we see the classical depiction of Terra (Earth), Aqua (Water), aer (Air), and Ignis (Fire)

We can see in this figure that the Earth is the “Lowest Element” – but like all dynamic tension in the Tarot, as the lowest low it is thus connect to the highest high (aether, or Spirit, the pure air breathed by the Gods and thus what constitutes the space in which everything else is embedded).