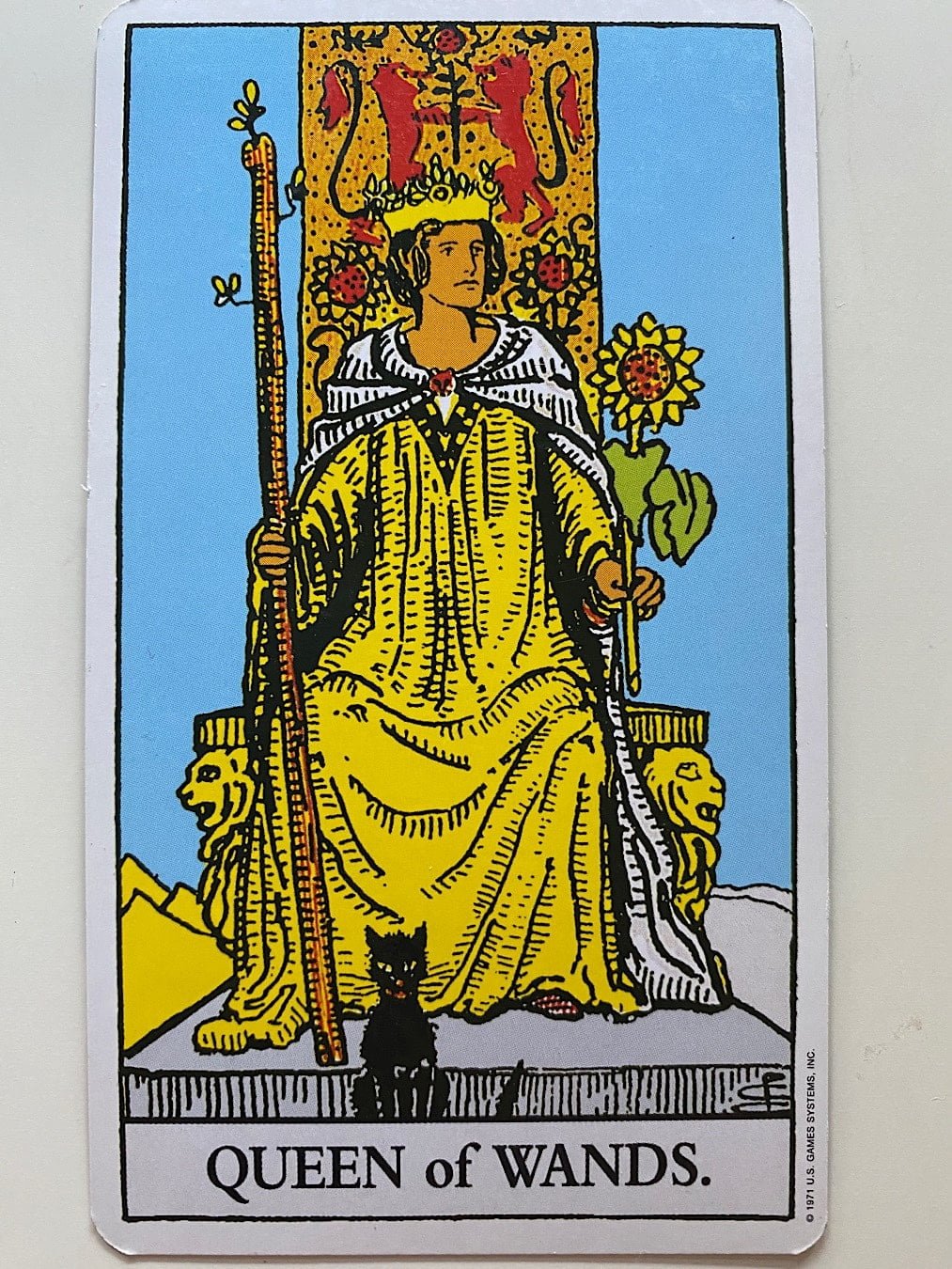 Keywords: Powerful, confident, experienced, has achieved her dreams and goals, her passions have been realized, filled with Fire, good luck, Matriarchal, fluid dynamics

The Queen of Wands sits upon a stone throne, upon which are carved fiery lions. She holds a wand in her right hand and a sunflower in the other. Upon her head is a golden crown. She has a look of seriousness upon her face, looking slightly off to the side.

At her feet is a black cat. Fun Tarot fact: the artist of the RWS, Pamela Colman Smith, knew this cat in real life; its name is Snuffles.

The Queen of Wands the epitome of a strong matriarch. She has the fire of the Knight and the King but her passion is tempered by the balancing force of water, making her more reasonable and accomodating in her wielding of power.

In this sense, she has affinity with the soft power of the Empress in contrast to the hard edges of the Emperor.

But do not be fooled, for like a Mama Bear, if threatened she will unleash her wrath and show no mercy.

She represents the force of the Sun and its productive generosity when combined with the influence of Water. From water and fire grows all life. Thus, the Queen of Wands represents the generativity of our creative desires.

The Queen of Wands is the successful artist, the powerful CEO, the politician, and yet there is still a grace to her demeanor that belies the strength of her Will. 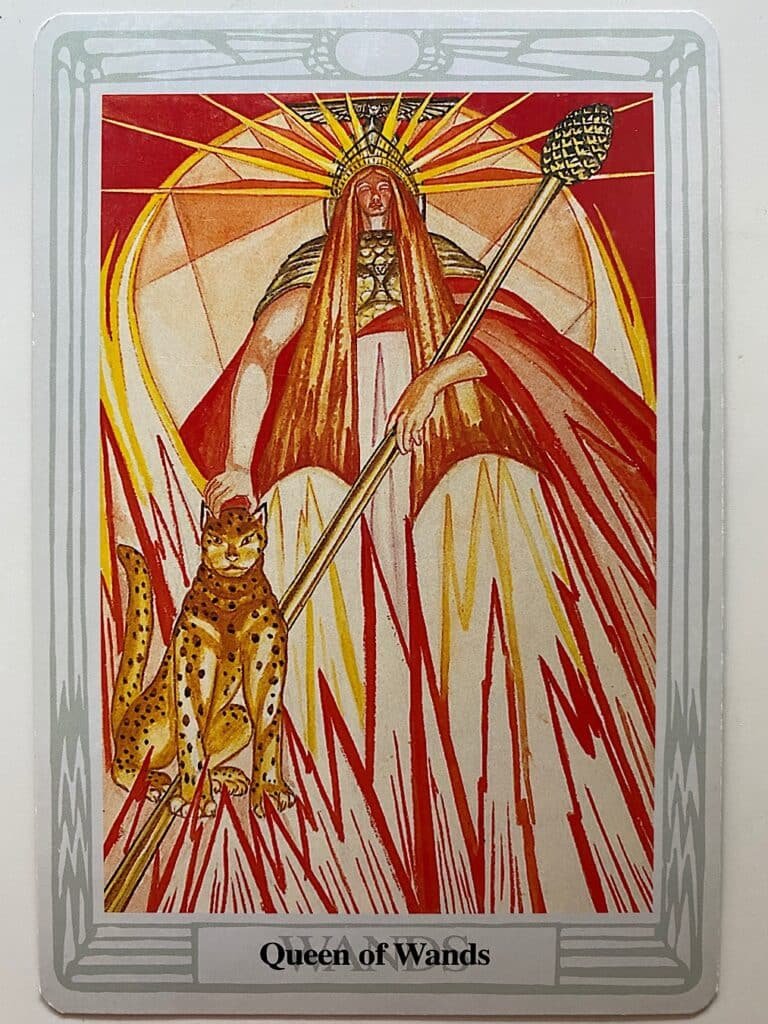 The Queen of Wands in the Thoth Tarot is powerful and regal. Sitting upon a throne of flames, she wears a crown of 12 fiery Sun rays, representing her mastery of the Zodiac. Above her head is a winged globe, a symbol of hermetic equilibrium, isomorphic to her delicate balance between Fire and Water.

In her hand is a staff of power and at her side is a fierce leopard.

Crowley says, “The characteristics of the Queen are adaptability, persistent energy, calm authority which she knows how to use to enhance her attractiveness. She is kindly and generous, but impatient of opposition. She has an immense capacity for friendship and for love, but always on her own initiative.”

This is one fierce lady. If you respect her, she will respect you back but if ill-dignified she is liable to be a fiery tyrant.

The jagged edges of the fire symbolize the transformation of her fiery Will in geometrical light. This alchemy is a symbol of her material power.

Crowley says the cone on top of her wand is a symbol of Earthly Bacchus, the God of Wine. This tells us that although the Queen of Wands is fierce she is also amicable, allowing herself to socialize among those of lower status. But do not test her, for even under the influence of Wine, she has no patience for those who stand in her way.

Moreover, Crowley says, “Her face expresses the ecstasy of one whose mind is well in-drawn to the mystery borne beneath her bosom.”

This mystery is the alchemy of keeping Fire alight amidst the calming influence of Water. It is the same alchemy of the Fool: +1 + -1 = 0, the equation of the Middle Pillar and the Christ-center of Tiphareth.

And yet, Crowley points out there is a sense of snobbery and pride with the Queen of Wands. She knows she is superior to the subjects she rules. She is willing to drink with them but never for a second forgets that it is she and she alone who is Queen.

From Book T – The Queen of the Thrones of Flame

A CROWNED queen with long red-golden hair, seated upon a Throne, with steady flames beneath. She wears a corslet and buskins of scale-mail, which latter her robe discloses. Her arms are almost bare. On cuirass and buskins are leopard’s heads winged, and the same symbol surmounteth her crown. At her side is a couchant leopard on which her hands rest. She bears a long wand with a very heavy conical head. The face is beautiful and resolute.

Adaptability, steady force applied to an object, steady rule, great attractive power, power of command, yet liked notwithstanding. Kind and generous when not opposed.

If ill dignified, obstinate, revengeful, domineering, tyrannical, and apt to turn against another without a cause. She rules the heavens from above the last Decan of Pisces to above the 20 Degree of Aries: including thus a part of Andromeda.

Queen of the Salamanders.