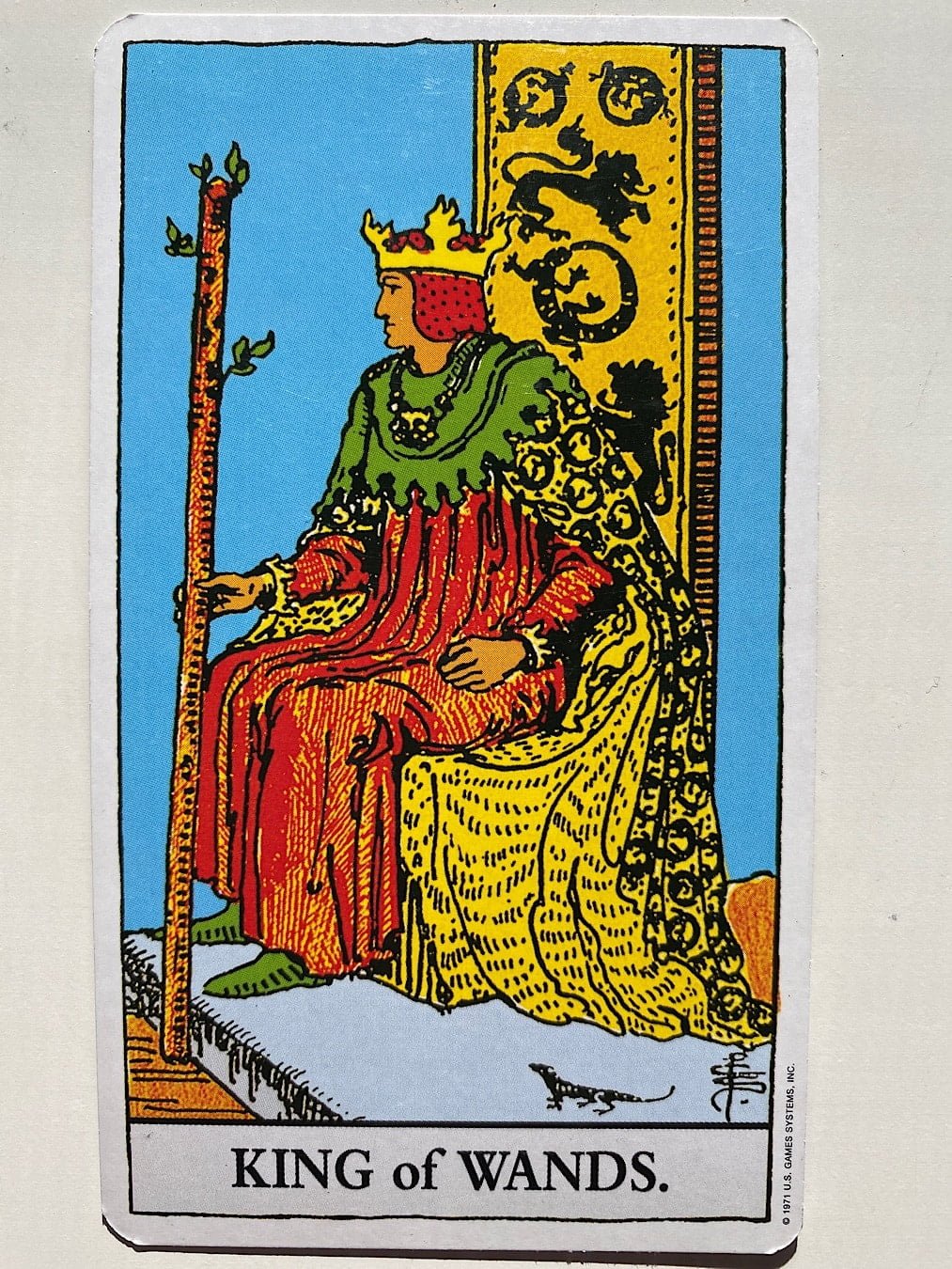 He sits upon his throne of salamanders and lions, wearing a golden crown of flames and holding his wand of power.

We see a salamander at his feet, reminding us of its occult affinity with elemental fire.

Unlike the Queen who we see head-on, the King of Wands is seen in profile. This gives him a sense of objectivity missing in the personal reliability of the Queen.

The King of Wands is a leader, confident, and someone who commands respect from those he has authority over.

In the Pictorial Key to the Tarot, Waite describes the King of Wands as “The physical and emotional nature to which this card is attributed is dark, ardent, lithe, animated, impassioned, noble.”

With the Lion as his symbol, we are reminded of the Pride and Passion of Leo. As a reminder, it is important to realize that the pride of a Leo, much like the Lion itself, is deserved. The Lion is not noble because he is an attention seeker. He is noble because of his power and accomplishments as a Lion.

The King of Wands is the same. He is proud and noble, not out of unhealthy narcissism or vanity, but because deep down he knows that his accomplishments deserve praise. He does not desire attention just for the sake of attention. Rather, at his deepest core, he desires to be recognized for his accomplishments. 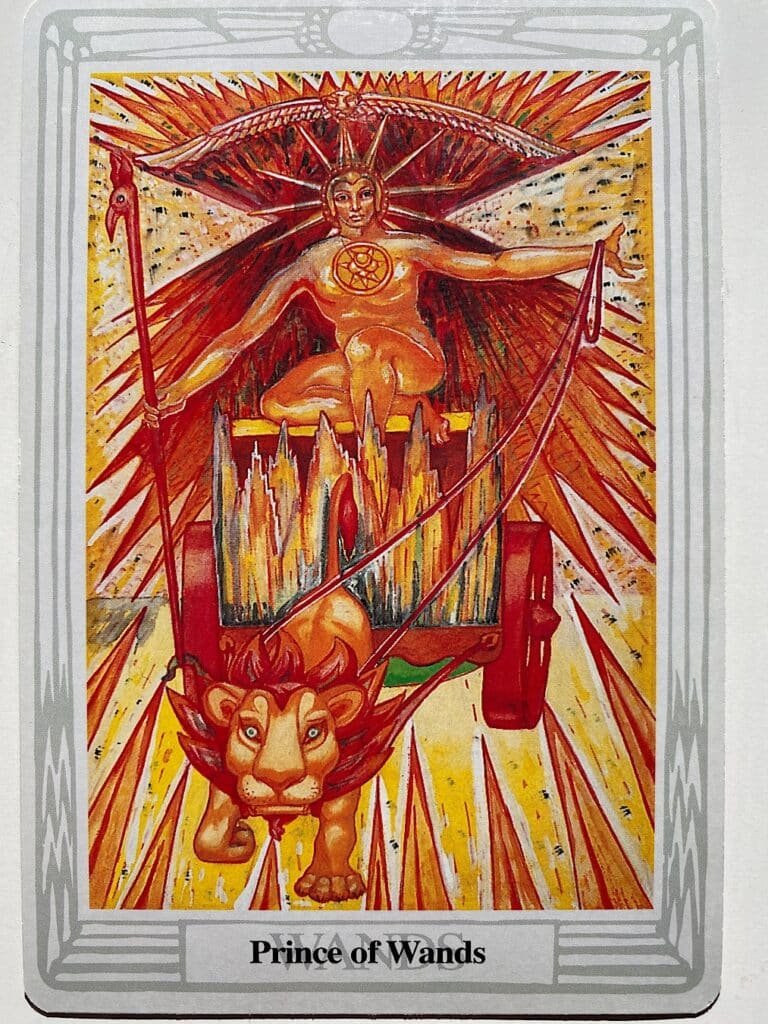 The Prince of Wands rides a chariot of fire pulled by a fiery lion. He holds a bird-headed staff in his right hand and holds the reins of the lion in the other.

It is fitting that at the top of the highest two wands we see the winged solar disc from Egyptian symbolism, a symbol of dynastic power. The winged sun is often depicted as the knob on the staff of hermes, which makes me think of the principles of hermeticism, which I connect to symbols like Baphomet and the “masculine/feminine” dynamic of androgyny, which is central to the symbolism of the winged egg.

The Prince of Wands represents Air of Fire and Air stirs up Fire to be more intense, like a blacksmith pressing the bellows to make the fire hotter.

Crowley says, “One of his greatest faults is pride; meanness and pettiness of any kind he holds in infinite scorn. His courage is fanatically strong, and his endurance indefatigable. He is always fighting against odds, and always wins in the long – the very long – run. This is principally due to his enormous capacity for work, which he exercises for its own sake, ‘without lust of result’; perhaps his haughty contempt for the world at large – which however coexists with profound and ecstatic respect for ‘every man and every woman’ as ‘a star’ – is responsible for this.”

The Prince is the son of the Queen and King but, strangely, represents the potential for the King to grow old and complacent, at risk of the fires of youth to take over with their ambition. The boldness and determination of the Prince hold no bounds.

From Book T – The Prince of the Chariot of Fire

A kingly figure with a golden, winged crown, seated on a chariot. He has large white wings. One wheel of his chariot is shewn. He wears corslet and buskins of scale armour decorated with a winged lion’s head, which symbol also surmounts his crown. His chariot is drawn by a lion. His arms are bare, save for the shoulder-pieces of the corslet, and he bears a torch or fire-wand, somewhat similar to that of the Zelator Adeptus Minor. Beneath the chariot are flames, some waved, some salient.

Swift, strong, hasty; rather violent, yet just and generous; noble and scorning meanness.

He rules the heavens from above the last Decan of Cancer to the second Decan of Leo; hence he includes most of Leo Minor.

Prince and Emperor of Salamanders.