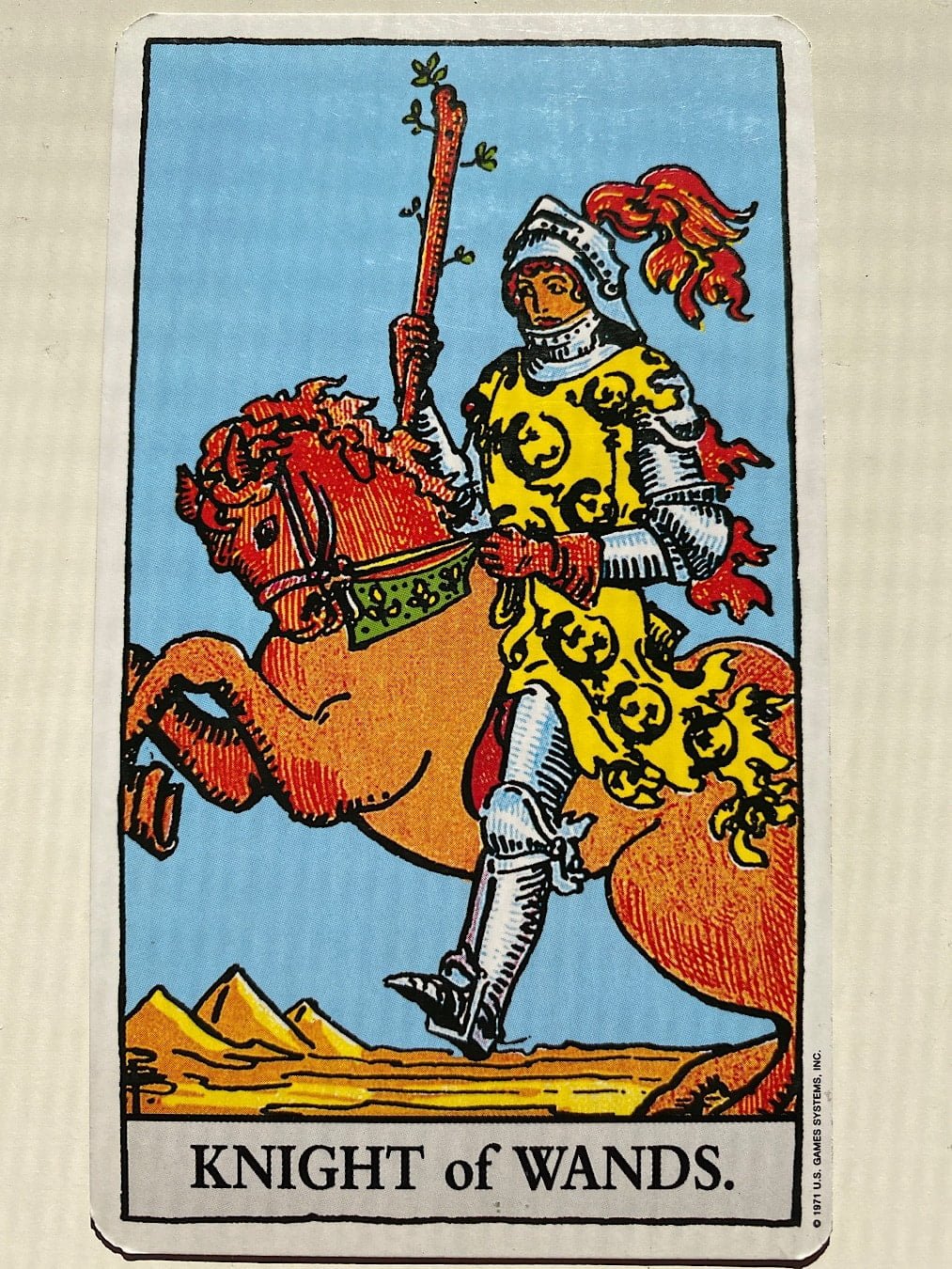 Keywords: Boldness, all-consuming passion and action, reckless focus, narrow-mindedness, risk, but with the possibility of great reward, pursue your dreams, burning fire, being “on fire”

In the RWS we see a valiant knight, dressed in armor and wearing the same yellow, salamander cloak as the Page of Wands, riding a bucking horse and holding a wand of power.

Plumes of red fly in the wind as the Knight moves swiftly through the same strange land of the Page of Wands. The Knight of Wands is all about action, velocity, movement, energy, passion.

The Knight of Wands is someone who isn’t afraid to dive headfirst into a new adventure. To give it his all.

In terms of the Hero’s Journey, he is in the Initiation phase facing The Road of Trials:

Once having traversed the threshold, the hero moves in a dream landscape of curiously fluid, ambiguous forms, where he must survive a succession of trials. This is a favorite phase of the myth-adventure. It has produced a world literature of miraculous tests and ordeals. The hero is covertly aided by the advice, amulets, and secret agents of the supernatural helper whom he met before his entrance into this region. Or it may be that he here discovers for the first time that there is a benign power everywhere supporting him in his superhuman passage.

The original departure into the land of trials represented only the beginning of the long and really perilous path of initiatory conquests and moments of illumination. Dragons have now to be slain and surprising barriers passed—again, again, and again. Meanwhile, there will be a multitude of preliminary victories, unsustainable ecstasies, and momentary glimpses of the wonderful land.[25]

The Fiery WIll of the Knight has the power to slay dragons, and he has done so in the pursuit of his ambition.

Above all, the Knight of Wands wants to prove himself. He is highly ambitious and he seeks to rise up through the ranks and take the throne from the complacent King. To do this he will need an Iron Will and utmost confidence.

But that is also his Achilles heel. He is so determined that his narrow-minded passion can make him reckless. He lacks any sense of caution. But it is his boldness that makes him likely to succeed. 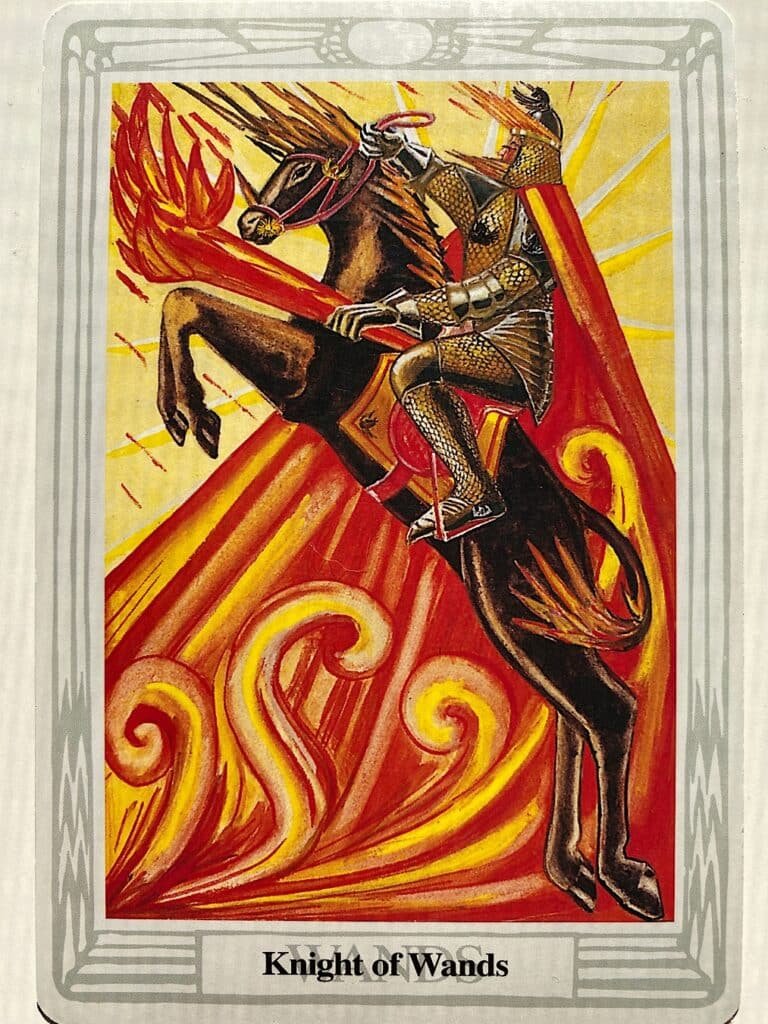 The Thoth Knight of Wands is truly a sight to behold. A Knight sits upon a black horse with a mane and tail of fire. Behind the Knight flows a long cape of pure Fire.

The Knight of Wands is Fire of Fire. And thus he is pure force. Pure energy. Pure Will.

Crowley says, “The moral qualities appropriate to this figure are activity, generosity, fierceness, impetuosity, pride, impulsiveness, swiftness in unpredictable actions. If wrongly energized, he is evil-minded, cruel, bigoted and brutal. He is in either case ill-fitted to carry on his action; he has no means of modifying it according to circumstances. If he fails in his first effort, he has no resource.”

The Knight of Wands is bursting with so much energy that like lightning in a bottle if you unleash it and it doesn’t strike its first target there is no time for second chances.

The strong ambition and fierceness make the Knight of Wands a powerful ally to a fight but if he is not of good character, be careful for that fierceness might be turned towards your ruin.

Unlike a controlled burn, the Knight of Wands is like a raging wildfire. There is so much energy it cannot be controlled and is liable to be purely destructive.

From Book T – The Lord of the Flame and the Lightning; The King of the Spirits of Fire

A winged Warrior riding upon a black horse with flaming mane and tail: the horse itself is not winged. The rider wears a winged helmet (like the old Scandinavian and Gaulish helmet) with a Rayed Crown, a corslet of scale-mail and buskins of the same, and a flowing scarlet mantle. Above his helmet, upon his curass, and on the shoulder-pieces and buskins, he wears as a crest a winged black horse’s head. He grasps a club with flaming ends, somewhat similar to that in the symbol of the Ace of Wands, but not so heavy, and also the sigil of his scale is shown; beneath the rushing feet of his steed are waving flames and fire. He is active — generous — fierce — sudden — impetuous.

If ill dignified, he is evil-minded — cruel — bigoted — brutal. He rules the celestial heavens from above the Twentieth Degree of Scorpio to the First Two Decans of Sagittarius: and this includes a part of the Constellation Hercules. (Hercules is always represented with a Club.)

King of the Salamanders.