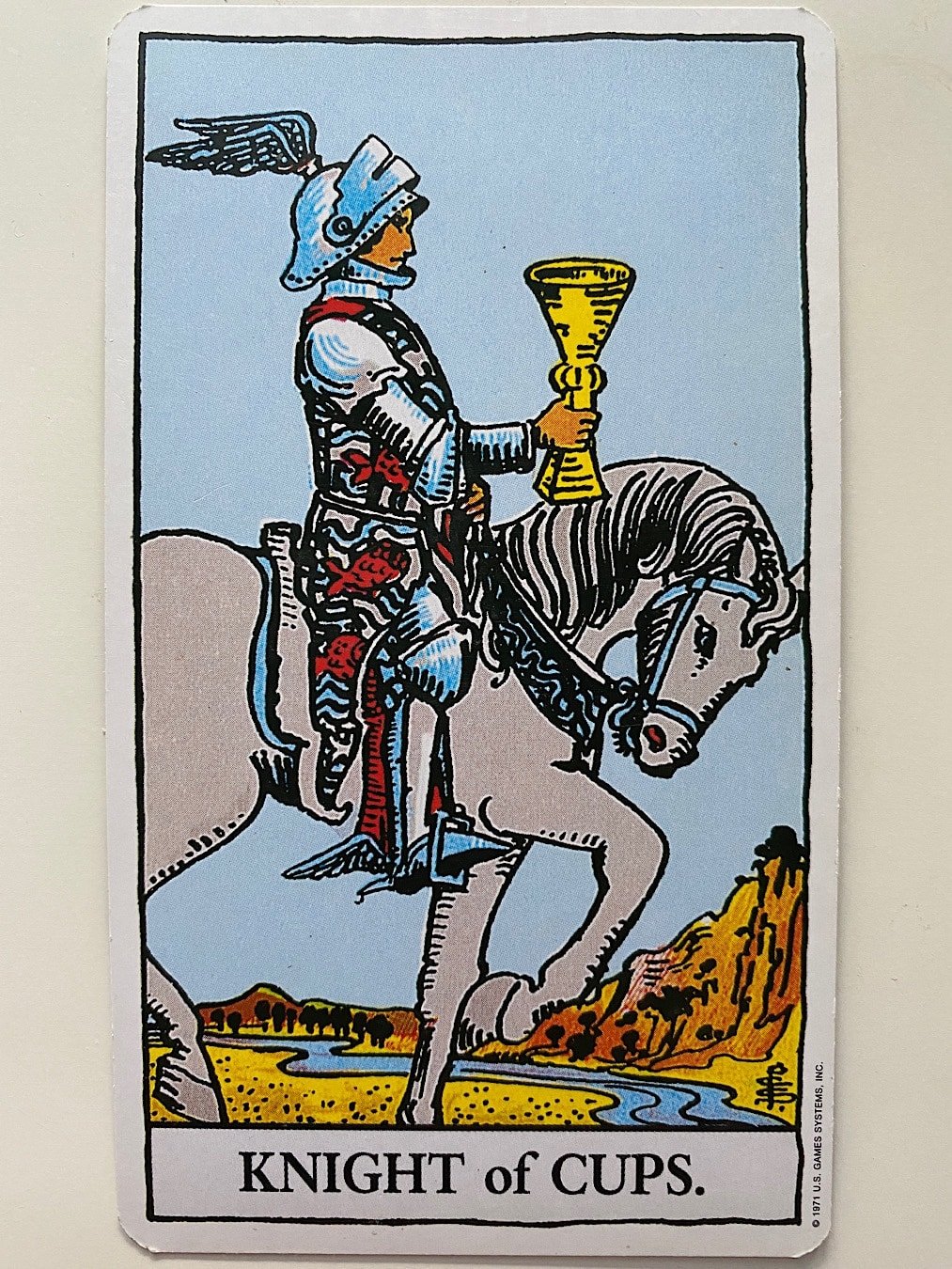 Reversed: not expressing yourself, being discouraged, ennui, depression, too emotional, socially withdrawn

In the RWS, we see an armored knight on top of a gray horse, wearing a cloak of fish, a winged helmet and shoes, and holding a cup. In the background, we see a flowing river.

In the Pictorial Key, Waite describes the Knight of Cups as “Graceful, but not warlike; riding quietly, wearing a winged helmet, referring to those higher graces of the imagination which sometimes characterize this card. He too is a dreamer, but the images of the side of sense haunt him in his vision.”

The Knight of Cups is a dreamer like the Page of Cups but he takes a step further: he begins to act on his dreams. He has ambition. He represents the courage to follow our emotions where they may go.

His imagination is not pure fantasy. There is an element of sacredness in his pursuit as if he is pursuing the Holy Grail. Perhaps it is fantasy, but perhaps it is the secret of the world. Regardless, he is prepared for an adventure of the soul. If the Page of Cups was receptive to messages from the unconscious, the Knight of Cups is willing to dive into the watery depths himself, wanting to experience the mystery himself.

The wings of the helmet and the “higher graces of the imagination” Waite refers to are a reference to the occult art of hermeticism, the fleet-footed god Hermes/Mercury was a stand-in for the Egyptian God Thoth, himself a version of Hermes Trismegistus, the mythological figure behind the hermetic movement from the 1st and 2nd centuries AD, which became one of the preeminent sources of influence on the great tradition of Western Esotericism.

In Book XI of the Corpus Hermeticum, Nous, the Universal Mind (God), says to Hermes that:

See what power you have and what speed! You can do all these things and yet God cannot? Reflect on God in this way as having all within Himself as ideas: the cosmos, Himself, the whole. If you do not make yourself equal to God you cannot understand Him. Like is understood by like. Grow to be immeasurable size. Be free from every body, transcend all time. Become eternity and thus you will understand God. Suppose nothing to be impossible for yourself.

The idea that from the power of your ideas as God “nothing is impossible” is at the heart of the tradition of Western Occultism and its most American by-products: New Thought. 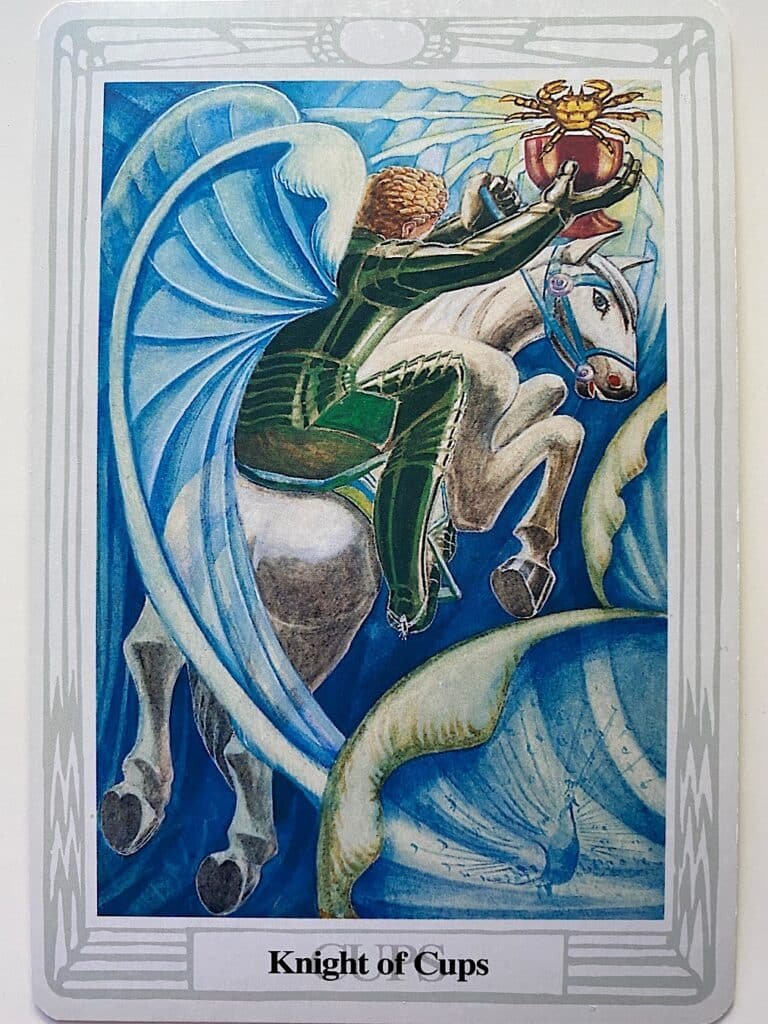 In the Thoth Knight of Cups we see a Knight on a winged horse, a Pegasus. In his hand is the red Holy Grail, the same one held by the Scarlet Woman in the Lust card. Inside the cup is the crab of Cancer, representing the quest to find our spiritual homes no matter how far we wander.

Below the Knight of Cups is a blue peacock, whose plumage transforms into the waves of the ocean.

Crowley says, “The Knight of Cups represents the fiery part of Water, the swift passionate attack of rain and springs; more intimately, Water’s power of solution.”

Moreover, in terms of his personality, Crowley describes the Knight of Cups as “mostly passive, in accordance with the Zodiacal attribution. He is graceful, dilettante, with the qualities of Venus, or a weak attractive, and easily becomes enthusiastic under such stimulus, but he is not very enduring….Yet with all this he possesses an innocence and purity which are the essence of his nature. But he is, on the whole, so superficial that it is hard to reach this depth. ‘His name is writ in water.’”

Accordingly, Crowley has a less than optimistic opinion about the Knight of Cups, seeing his character as flimsy and tenuous, like the waves of the Ocean itself. Nevertheless, as Crowley himself notes, the Knight of Cups can be the “swift and passionate attack of rain,” which, as a hurricane or flood demonstrate, can be devastating in their power.

Thus, as a dreamer, we ought not ever to underestimate the power of Water. While Fire and Water do in a sense cancel each other, their sheer fluidity and aggressiveness can be powerful forces when directed by the passions of emotion.

From Book T – The Lord of the Waves and the Waters; The King of the Hosts of the Sea

A Beautiful, winged, youthful Warrior with flying hair, riding upon a white horse, which latter is not winged. His general equipment is similar to that of the Knight of Wands, but upon his helmet, cuirass and buskins is a peacock with opened wings. He holds a cup in his hand, bearing the sigil of the scale. Beneath his horse’s feet is the sea. From the cup issues a crab.

Ill dignified, he is sensual, idle and untruthful.

He rules the heavens from above 20 Degree of Aquarius to 20 Degree of Pisces, thus including the greater part of Pegasus.

Fire of Water King of Undines and Nymphs.