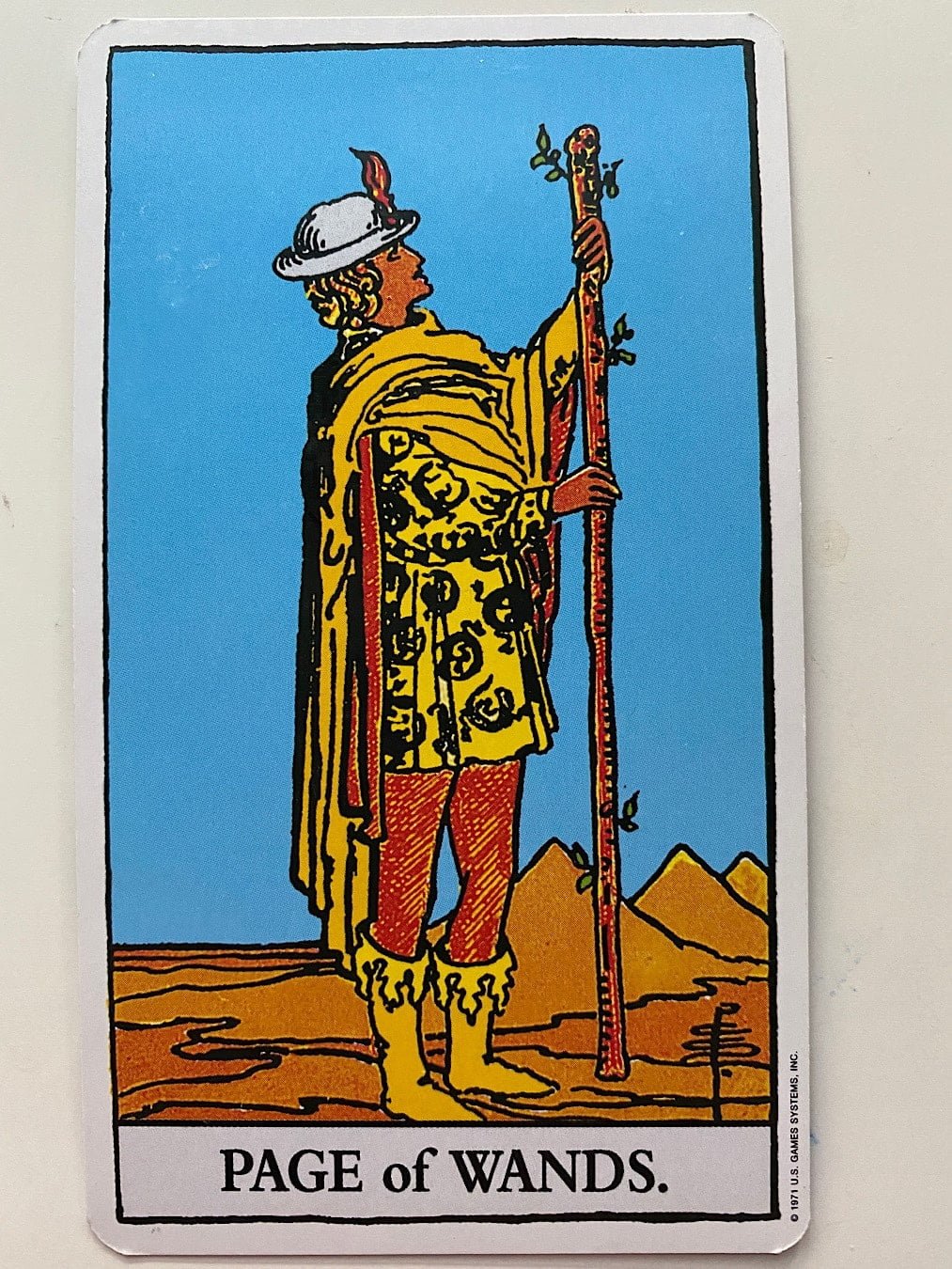 In the RWS the page of wands is a young dandy wearing a bright yellow tunic covered with salamanders. He wears a hat with a red feather in his cap, much like the Fool. This gives us a clue that the Page of Wands is symbolically connected with new beginnings and possibilities, albeit in the realm of desire and ambition.

In the background are pyramids, suggesting he is in a strange land, about to begin his Hero’s journey. Mythologists describe this is the Hero’s “Call to adventure”:

According to Joseph Campbell, this call to adventure pulls us into the unknown:

a distant land, a forest, a kingdom underground, beneath the waves, or above the sky, a secret island, lofty mountaintop, or profound dream state; but it is always a place of strangely fluid and polymorphous beings, unimaginable torments, superhuman deeds, and impossible delight. The hero can go forth of their own volition to accomplish the adventure, as did Theseus when he arrived in his father’s city, Athens, and heard the horrible history of the Minotaur; or they may be carried or sent abroad by some benign or malignant agent as was Odysseus, driven about the Mediterranean by the winds of the angered god, Poseidon. The adventure may begin as a mere blunder… or still, again, one may be only casually strolling when some passing phenomenon catches the wandering eye and lures one away from the frequented paths of man. Examples might be multiplied, ad infinitum, from every corner of the world.[17]

This “distant land” is clearly seen in the Page of Wands via the symbolism of the pyramids.

The salamander is famous for being fireproof, representing the strength and bravery of youth. The salamander also has occult significance insofar as its mythical abilities to withstand fire were seen as connected to magic in some way. This is where “eye of newt” as a common ingredient in witch’s brews comes from.

The Page of Wands represents unformed passion. Someone who is young and ambitious, ready to set off on his own to explore strange lands and make a name for himself.

And yet with that youth comes inexperience. We are very much in the “beginner’s mind” like the Fool. And thus we have the potential to make fools of ourselves in this strange land, uncertain how to proceed with the execution of our ambition. 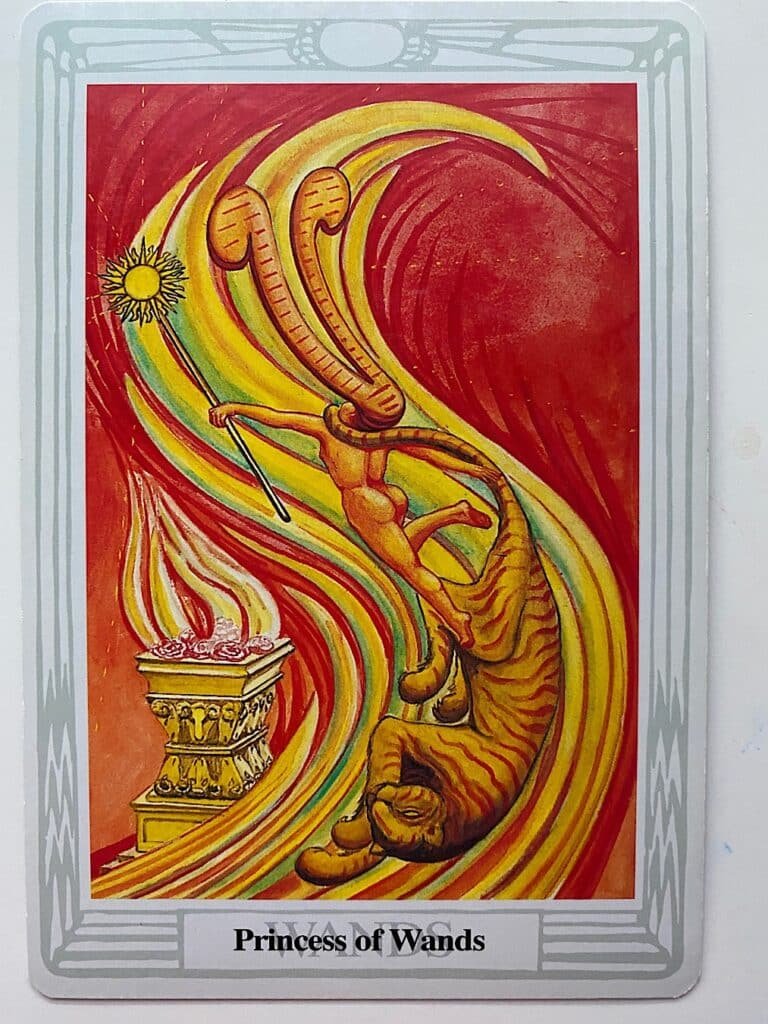 In the Thoth Tarot we see a naked woman with a large fiery headpiece swimming upstream in a river of fire, with a fiery tiger holding her back by the neck. In her hand is a scepter with a Sun in it.

Elementally, she is Earth of Fire. This is a complementary relationship for Earth provides the fuel for the fire of Life. It is pure metabolism. Energy with an infinite energy source.

Crowley says, “This card may be said to represent the dance of the virgin priestess of the Lords of Fire, for she is in attendance upon the golden altar ornamented with rams’ heads, symbolizing the fires of Spring.”

Moreover, the very shape of the fire she leaps in is akin to that of the letter Yod, which is the first letter of Yahweh’s name.

Her being naked represents “that chemical action can only take place when the element is perfectly free to combine with its partner.”

As a personality, “The force of her character imposes the impression of beauty upon the beholder. In anger or love she is sudden, violent, and implacable. She consumes all that comes into her sphere. She is ambitious and aspiring, full of enthusiasm which is often irrational.”

In other words, she is the embodiment of the spark of Fire itself, ready to catch fire the fuel of the Earth. She is the Wand as a torch, lighting the way into strange adventure, full of fury and passion. Symbolically, she is the power of combustion itself.

From Book T – The Princess of the Shining Flame; The Rose of the Palace of Fire

A very strong and beautiful woman with flowing red-gold hair, attired like an Amazon. Her shoulders, arms, bosom and knees are bare. She wears a short kilt reaching to the knee. Round her waist is a broad belt of scale-mail; narrow at the sides; broader in front and back; and having a winged tiger’s head in front. She wears a Corinthian-shaped helmet and crown with a long plume. It also is surmounted by a tiger’s head, and the same symbol forms the buckle of her scalemail buskins. A mantle lined with tiger’s skin falls back from her shoulders. Her right hand rests on a small golden or brazen altar ornamented with ram’s heads and with Flames of Fire leaping from it. Her left hand leans on a long and heavy club, swelling at the lower end, where the sigil is placed; and it has flames of fire leaping from it the whole way down; but the flames are ascending. This club or torch is much longer than that carried by the King or Queen. Beneath her firmly placed feet are leaping Flames of Fire.

If ill dignified, she is superficial, theatrical, cruel, unstable, domineering. She rules the heavens over one quadrant of the portion around the North Pole.

Princess and Empress of the Salamanders.

Throne of the Ace of Wands.