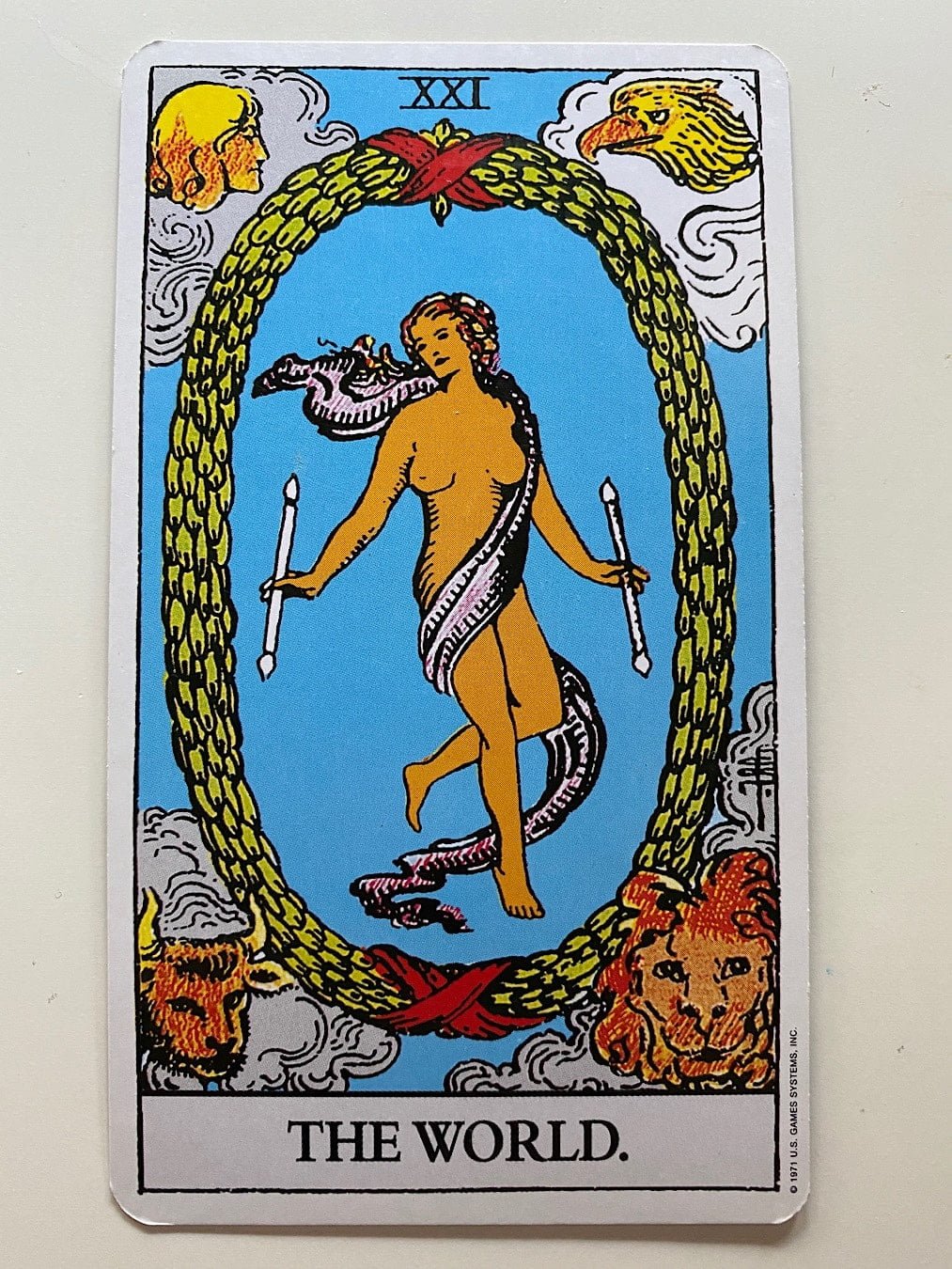 Complement of The Fool (0)

“In the final analysis the idea of an unus mundus [one world] is founded, on the assumption that the multiplicity of the empirical world rests on an underlying unity…Everything divided and different belongs to one and the same world.” ~ Carl Jung

In the RWS we see a half-naked woman covered with a ribbon. She holds a double-sided wand in each hand. Encircling her is a laurel of success and completion, reminiscent of an ouroboros eating itself.

In each corner of the card is a man, an eagle, a lion, and a bull. This symbolism refers to the Christian concept of the Tetramorph, made famous by the psychedelic experience of the prophet Ezekiel as described in the first chapter of Ezekiel:

4 As I looked, a stormy wind came out of the north: a great cloud with brightness around it and fire flashing forth continually, and in the middle of the fire, something like gleaming amber. 5 In the middle of it was something like four living creatures. This was their appearance: they were of human form. 6 Each had four faces, and each of them had four wings. 7 Their legs were straight, and the soles of their feet were like the sole of a calf’s foot; and they sparkled like burnished bronze. 8 Under their wings on their four sides they had human hands. And the four had their faces and their wings thus: 9 their wings touched one another; each of them moved straight ahead, without turning as they moved. 10 As for the appearance of their faces: the four had the face of a human being, the face of a lion on the right side, the face of an ox on the left side, and the face of an eagle; 11 such were their faces. Their wings were spread out above; each creature had two wings, each of which touched the wing of another, while two covered their bodies…

The Tetramorph was used by Christians as a symbol for the Four Evangelists, with Matthew the man, Mark the lion, Luke the ox, and John the eagle.

The Tarot, and especially the Rider-Waite-Smith has always been influenced by Christian symbolism. The World deeply encapsulates this tradition.

The Tetramorph can be seen in Christian art such as this: 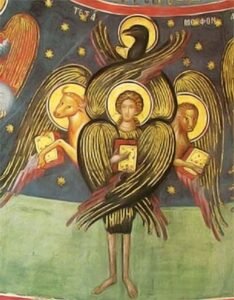 Or consider this 13th century depiction of Christ surrounded by the Tetramorph: 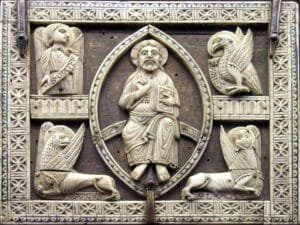 Here we can see the resemblance to The World Tarot card very clearly:

In turn, the Christian Tetramorph was likely influenced by when Jews were Babylonian captives, inspired Ayssrian Tetramorphs such as this: 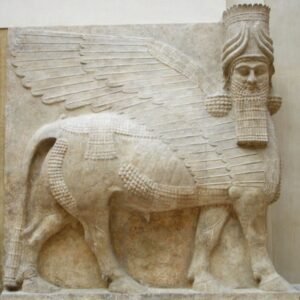 In this more ancient, pagan form, the Tetramorph is based on Zodiacal symbolism: the Man being Aquarius, the Eagle Scorpio, the Ox Taurus, and the Lion Leo, representing Air, Water, Earth, and Fire, respectively.

This is one of the reasons why I love the Tarot. Its symbolism is a beautiful syncretism between many different, overlapping spiritual and esoteric traditions.

Rachel Pollack in her book 78 Degrees of Wisdom writes, “And so we return to the Fool. Innocence and emptiness, united with wisdom. As we said at the beginning, of all the Major Arcana cards, only these two are moving. The oval wreath suggests the number 0, with all its symbolism. It implies as well the cosmic egg, the archetype of emergence; all things exist in potential and all potentials are realized. The self is everywhere in all things. The sashes at the top and bottom of the wreath are tied into infinity signs, indicating that the self is not enclosed but open to the universe.”

This is the balance of the masculine and the feminine alchemically transforming back into the cosmic androgyny from which the cosmos sprang. Thus, there is a hint that the woman in the card is intersex or transgender. 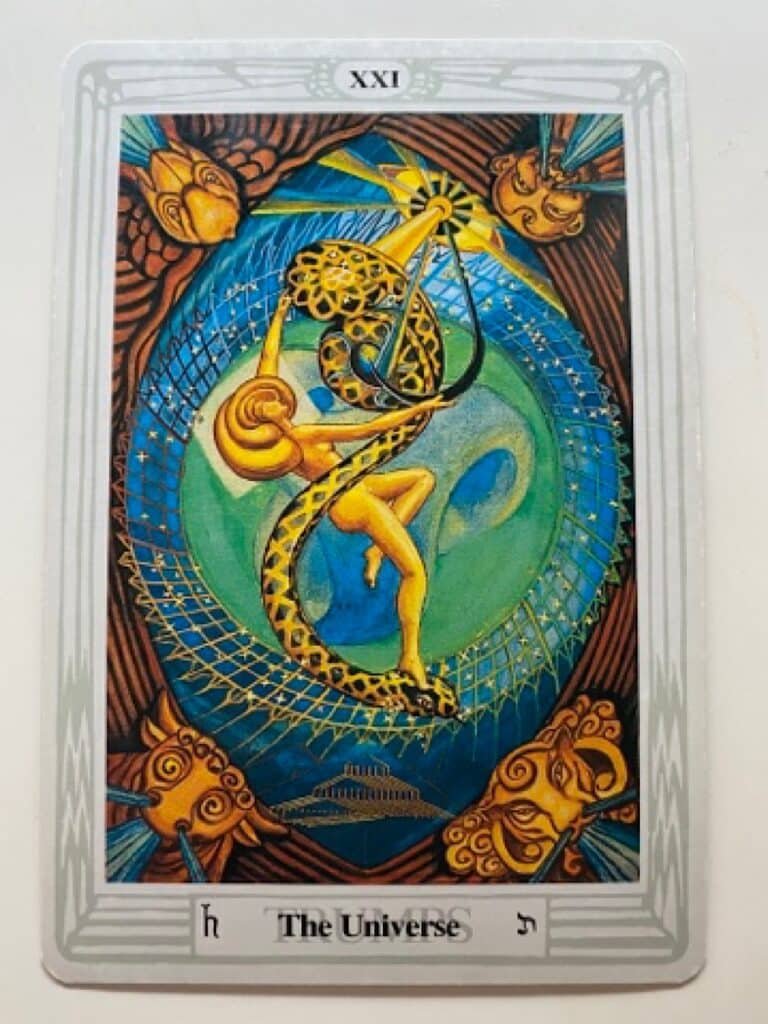 Celebration of the Great Work accomplished

For Crowley, the “first and most obvious characteristic of this card is that it comes at the end of all, and is therefore the complement of the Fool.”

Coming in between the Fool and The Universe, “The twenty cards that tie between these two exhibit the Great Work and its agents in various stages. The image of the Universe in this sense is accordingly that of a maiden, the final letter of Tetragrammaton.” (Book of Thoth, p. 118)

In this sense then, the Universe represents the Great Work completely. As a reminder, the Great Work is the process of the microcosm (human consciousness) coming to Know the macrocosm (the Supernal Realm of God).

For Crowley, “The Fool is the negative issuing into manifestation; The Universe is that manifestation, its purpose accomplished, ready to return.” (Book of Thoth, p. 118)

Once the Great Work has been accomplished, the Fool can then reenter his portal to the otherworldly realm of Nothing.

“This beginning [the Fool] was Nothing; the end [The Universe] must therefore be also Nothing, but Nothing in its complete expansion.”

In the center background of the Universe is an image of green “loops and whorls.” This represents the dynamic dance of all the symbols of the Tree of Life hidden within the Card, “not visible except to those of wholly pure heart.”