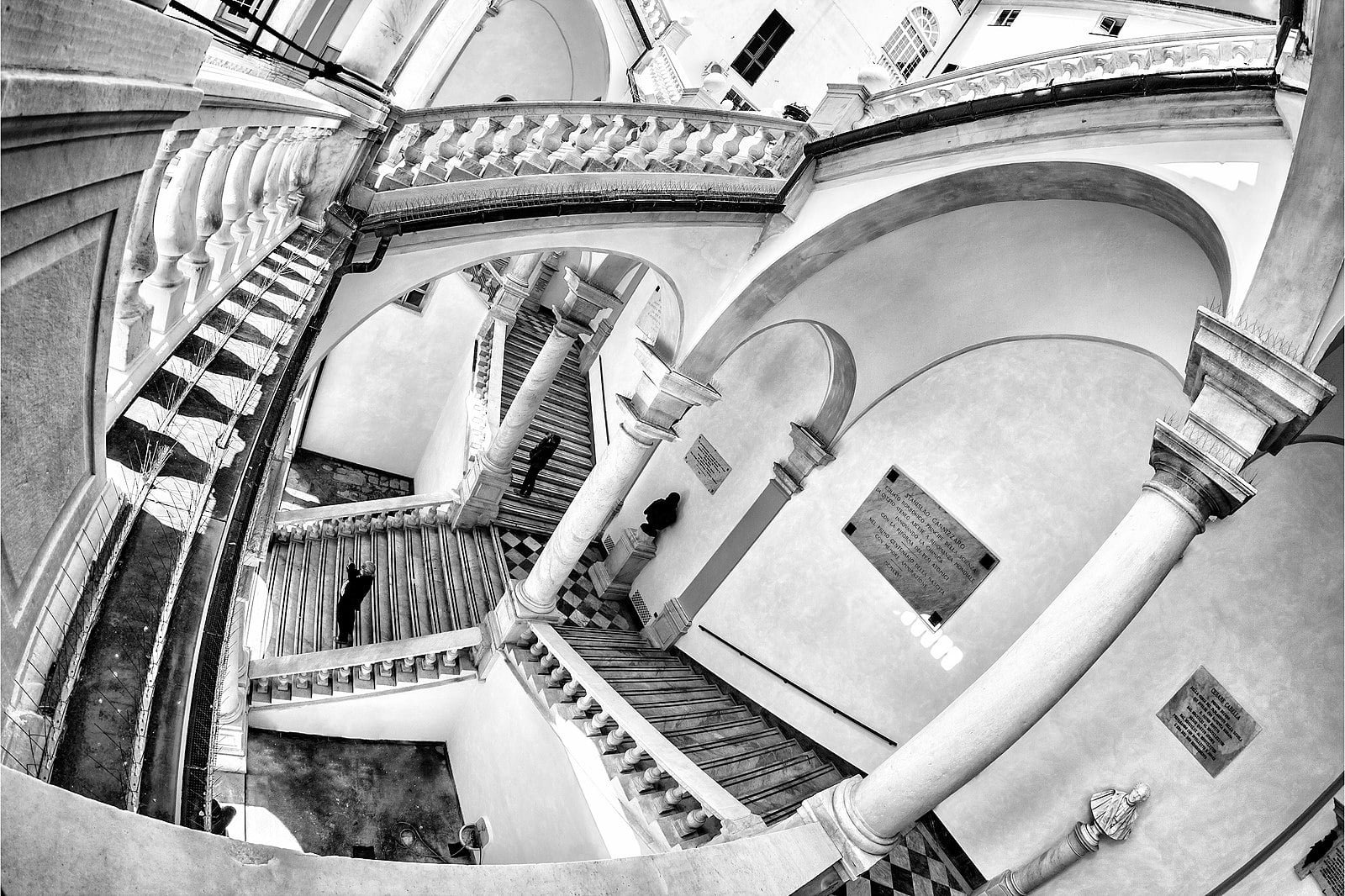 This makes ideas like panentheism particularly mysterious. God is not just identical to Nature but is somehow both in Nature and also beyond it in some way that is not possible to even conceive of.

This applies at every level of reality, from the microcosm to the macrocosm.

This especially applies at the level of conscious experience itself. God is said to be “within” us, and are “we” not on the “inside” so to speak?

And yet do we also not experience all the time moments of utter pain, boredom, and banality, moments where God seems to be nowhere, only the eternal embrace of Nature?

To my mind at least, transcending implies a movement that starts within and then moves beyond. Transcendence implies incarnation.

The Christ-nature is said to be 100% human and 100% divine. That is the official dogma, said with such certainty and finality, as if the more confident you sound determines it any less deeply incomprehensible. If they said Christ was 200% human and 200% divine would it be any less mysterious?

The numbers simply don’t add up. And they are not meant to. I think it is often missed how these mysterious Christological statements function similarly to Zen koans: they are meant to stop the rational mind from trying to fit the divinity of Christ into an easily understandable framework.

They are meant to defy all attempts of the Intellect to understand it. It is not really our conscious ego that understands such Christ-koans; it is our greater Soul, filled with an ancient system of unconscious intelligence far wiser, far more powerful than the fragments of consciousness scattering across the surface of a tremendous ocean of otherness.

Given our immense smallness in the face of such mysteries, I am skeptical of anyone who claims to really understand how 100% = 200%. It’s pure non-sense, as in, not amenable to comprehension by the sensible faculties of reason. Same for miracles themselves.

I do not care that people believe miracles. I am prone to invoking a few myself. What bugs me is when people think they have any clue as to what sort of ontologies are needed for us to even begin to consciously comprehend how it works.

Is that a particle or a wave? Classical logic says it cannot be both at the same time. And yet that is what quantum mechanics seems to tell us. The strange quantum world seems to behave in a way that is also non-sense, i.e. at odds with the middle-sized world of Newtonian mechanics, perceivable and carved up into objects and categories that make sense to our conscious minds.

Physicists are continuously pushing the boundary of the quantum world closer to the world our minds live in. There is much we still do not understand about the nature of reality and I think it is wise to adopt an Einsteinian quietism in simple appreciation and awe of the mysteries of the cosmos.

But, nevertheless, these recent theoretical and experimental advances suggest that reality is very willing to violate our human desire for the world to not contradict itself.

But what if it really is paradox all the way down into the darkness of unknowing itself? What if God dwells in that darkness, and it is our job to leap headfirst down the rabbit hole?

What if the trust of faith is not a trust that our knowledge of God is somehow secure, but rather, a trust that God will catch us when we plunge into the black cloud of mystery?

On this view, faith becomes about letting go of claims to knowledge instead of having it secured in a continuous miracle of revelation.

Revelation and peak experiences do occur, but unless one is mad, most of our experiences are more down-to-Earth. And while the trace memories of revelation can certainly shape our daily attitude in a positive way, if we do not have an answer to the banality and absurdity of modern, daily life, all of our most exalted philosophies and religions will be nothing but mental decoration.

It is thus essential to have a philosophy of banality, to understand the phenomenology of how the sacred can exist in moments of utter normality and sobriety.

Some people call this the spirituality of potato peeling. Nobody wants to peel the potatoes. But it needs to be done. And it is your job to do them. And so you start. How to entertain yourself? This is boring. Random thoughts pop into your mind. You dissociate from the peeling itself and get lost in your ruminations.

All of this is a process, happening in time, which seems to flow ever forward in little slices of being-here-now as an embodied being embedded into a vast semiotic web of meaning, culture, and materiality.

One question is: experientially, do these slices overlap and bleed and loop into each other?

Einstein saw the space-time continuum as like a giant loaf of bread. The long axis of the bread loaf is the 4th dimension: time. But the key is that the whole loaf exists at once as a single continuum: thus, the past, present, and future all exist simultaneously.

We experience time as flowing in a single direction, but mathematically, the physics equations for time make sense whether time is flowing forwards or backward.

I am no physicist. I will leave it to you to extrapolate. But needless to say, my Imagination is kept busy thinking about certain possibilities of what might be influencing both our consciousness and all other consciousness in the universe.

The point is not to gee-whiz you with badly written and likely false accounts of scientific mysteries. My only point is to try to invoke some sense of mystery: to realize that nothing in scientific law entails that the human mind will ever be able to fully understand itself and its relation to the cosmos.

But I find a certain amount of comfort in the mystery of consciousness, for it is on par with the greatest mysteries of religion e.g. how a man can be both 100% human and also 100% God. How three can be one and one can be three. How strange and miraculous things might happen. Is it any less mysterious than how consciousness, whatever the hell that is, relates to the cosmos?

Nobody has a clue about any of this. Any pretense towards understanding is but a language game that has practical value. But as a rule, the mysteries of consciousness and transcendence are not mysterious in the same way a good whodunnit is full of mystery.

Some mysteries are mysterious in the sense that their mysteriousness lies in their overwhelmingly apparent insolvability and inscrutability. The mystery lies in precisely the feeling of overwhelming contradiction that immediately starts interior processes of cataloging and rationalizing that are but pale shadows of reality.

But when those processes quiet, we let ourselves bask in the silence of that feeling, and the silence becomes overwhelming in its richness and fullness.

A simple word for this is “awe,” which is a great word, but almost always has an underwhelming effect due to its over usage in everyday language.

Everyday usage obscures these two senses of “awe” but I think the entire mystical tradition provides evidence for the validity of the distinction.

I could give a few examples to help illustrate, but it’s frustrating how inadequate the English language is to invoke the right memory. For me, it is being at the beach, my feet in the sand, the rhythms of the ocean waves, the laughter of children, the birds crying, and most of all, the Great Sun, soaking my skin with its warmth, penetrating into my consciousness and gently sapping my energy, causing me to drift into a lazy, dream-like state.

One of my least favorite things about Western Christianity is the whole evangelical zeal for converting other people to believe what you happen to believe is “the Truth,” an insane and evil act of hubris that is utterly devoid of empathy and compassion, the ethical core of all good religious teaching.

These Christians believe they are “saving souls” but in reality they are asserting power. I believe it is enough of a challenge to save our own souls. After all, Jesus Himself said that we should focus on removing the plank in our eye instead of the speck of dust in everyone else’s eye.

This lesson from Jesus speaks to an underlying ethical principle: an asymmetry wherein our greater duty is always to focus on getting our own house together before judging others. And that includes assuming the very framework of Christianity is superior relative to other religious systems and philosophies. Your Christianity might itself be the “plank” Jesus is talking about. After all, Jesus wasn’t Himself even a Christian. He was a Jew.

This missionary zeal of evangelical Christianity is all about getting closer to Christ through war-like action, “waging spiritual warfare” against the dark tide of pagans and unbelievers. But I think that if these evangelical Christians spent more time on the beach doing nothing except soaking in the presence of God, they would do more good and set a better example than any positive action of zeal and conquest ever could.

God’s Presence in Our Lives

What is the message of Jesus Christ?

Did Jesus Bodily Rise from the Dead?

What is Spiritual Existentialism?

Why I Read the Bible After Deconstruction

2 thoughts on “Consciousness and the Mysteries of Transcendence”