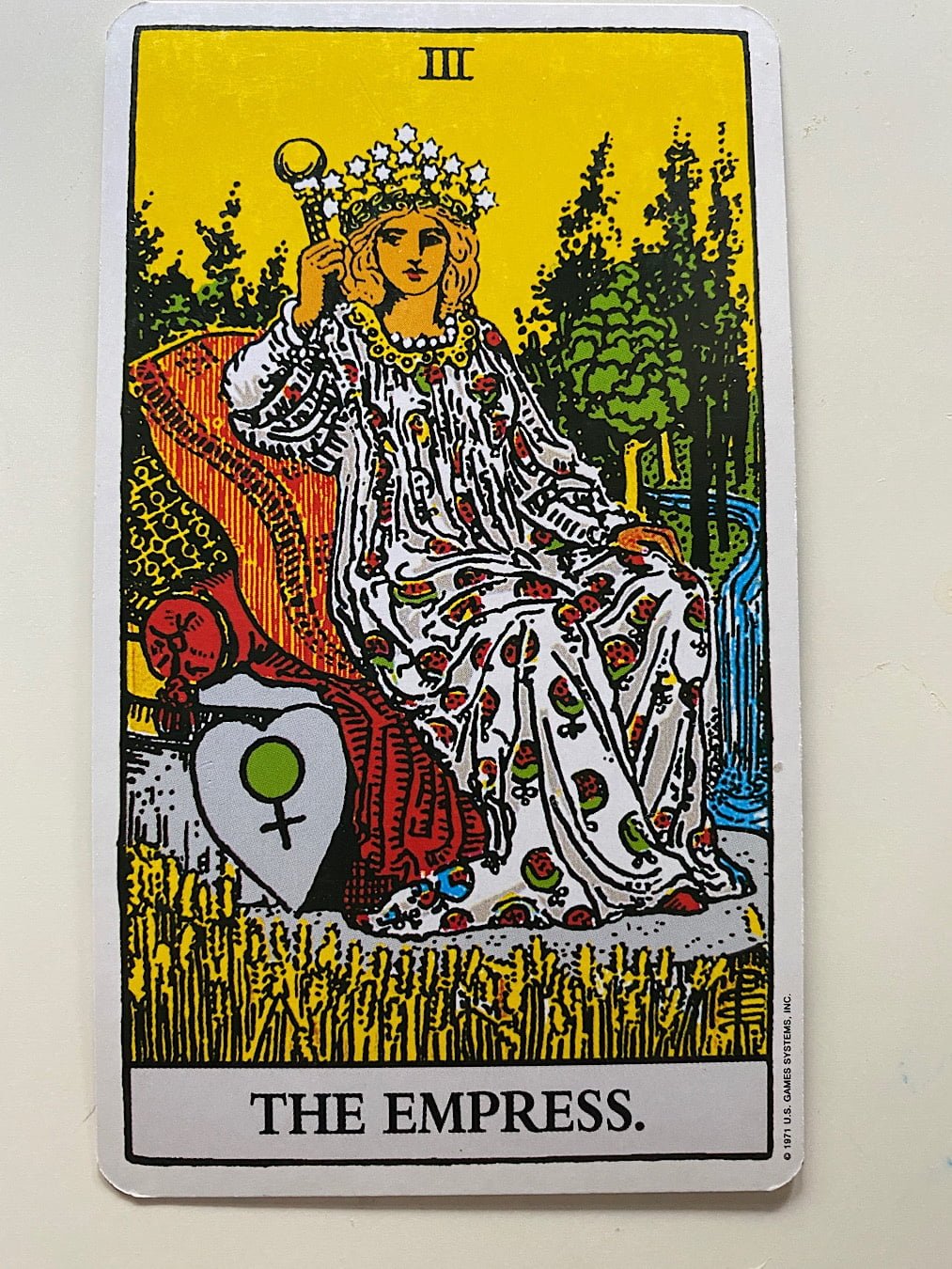 Keywords: The Empress represents the great Mother Goddess, the Earth Goddess, Gaia, the Great Divine Feminine who is receptive to the energy of the Sun, who takes it and sublimates it into a form of energy uniquely hers. She represents fecundity and beauty, Maternal instincts.

She is the softness of water which erodes the hardest rock but also the crushing strength of a tidal wave. She is the negative principle of receptivity.

She is the negative space within a vessel that actually makes it useful.

For Crowley, the Empress is a complement of the Emperor, the next Trump, but her energy is more “universal.”

In Crowley’s system, the Empress, living in the Path between the Father and Mother in the Supernal Realm, implies that “the fundamental formula of the Universe is Love.” The Empress is thus the alchemical source for the Thelemic principle: Love is the Law.

Although many Tarot readers tend to reduce the Empress to simple stereotypes surrounding womanhood, Crowley says, “It is impossible to summarize the meanings of the symbol of the Woman, for this very reason, that she continually recurs in infinitely varied form.”

For me as a trans feminine person, it is important to recognize that this “infinitely varied form of womanhood” does emphatically include trans woman. It reminds me of a verse in the Gnostic Scripture Thunder,

I am the mother and the daughter.

I am the limbs of my mother.

I am a barren woman

Who has many children.

This idea that a barren woman might be emblematic of the essential qualities of divine femininity is an important point if we are to make a trans liberatory theology. In her infinitely varied form, we do not want to define womanhood just in terms of her reproductive capacities. There is more to womanhood than just biology. There are other ways to give birth to positive energy than just literal reproduction. This is a central lesson from trans feminism.

Sitting on her throne, the blue flames around her represent her femininity in terms of the fluid dynamics of water.

In her right hand she holds the lotus of Isis, representing feminine power, as Isis was the Goddess of Magick.

On the dress of the Empress we see images of bees. In ancient Greece, the priestesses of Artemis and Demeter were called bees. The symbology is clear: bees are a symbol of fecund femininity.

Crowley was raised in the Bible, so I’m sure he was familiar with the metaphor of “the land of milk and honey” to described the Promised Land. The Hebrew phrase for this evokes the idea of flowing or gushing, bringing to mind sexual metaphors, another metaphor of femininity and the life giving properties of traditional womanhood.

The Empress’s belt, or girdle, is the Zodiac itself.

Beneath the Empress is a tapestry filled with images of fleur-de-lis and fish. The fish is a symbol of Christ and the fleur-de-lis was used as a symbol for French royalty for centuries. Since France is historically a Catholic nation, the roots of the symbol can be traced back to associations with the Virgin Mary, another potent symbol for the Empress herself. Like Isis, like Artemis, like Diana, she is the Great Virgin/Goddess, the barren woman who gives birth to all children.

Revolving around the Empress are two Moons. Crowley says this is a symbol for how opposition creates balance, which is the central lesson of the Tree of Life, just how the Empress and Emperor create balance of masculinity and femininity in their opposition.

The pelican in the bottom left corner represents “The Great Mother and her offspring, with the Daughter in the formula of Tetragrammaton.” The Pelican is feeding its young with the blood from its own heart. On the other side of the pelican is the White Eagle of the Alchemist, which is a lunar symbol counterpoised against the opposite symbology in the Emperor,

Quite curiously, Crowley says of the Pelican that in virtue of the “inheritance of blood” and continuity from Mother to daughter, from light to darkness, when fully understood, it would “become possible to reconcile the Quantum Theory with the Electro-magnetic equations.” (p. 76)

I can only imagine he is imagining that the continuity between mother and daughter represented here, between light and dark, is equivalent to crossing the chasm between the discreteness of quantum theory and the continuous equations of electro-magnetic theory. While there is clearly a continuity between mother and daughter, there is also a discrete jump between the two symbols in their principles of alchemical operation.

In the back of the card is an arched doorway, what Crowley calls “the Gate of Heaven.”

Crowley makes a point to emphasize that the Empress is unique in the Tarot because more than any other card she must be considered as a whole and not just a sum of parts.

RETURN TO OTHER TAROT CARD MEANINGS