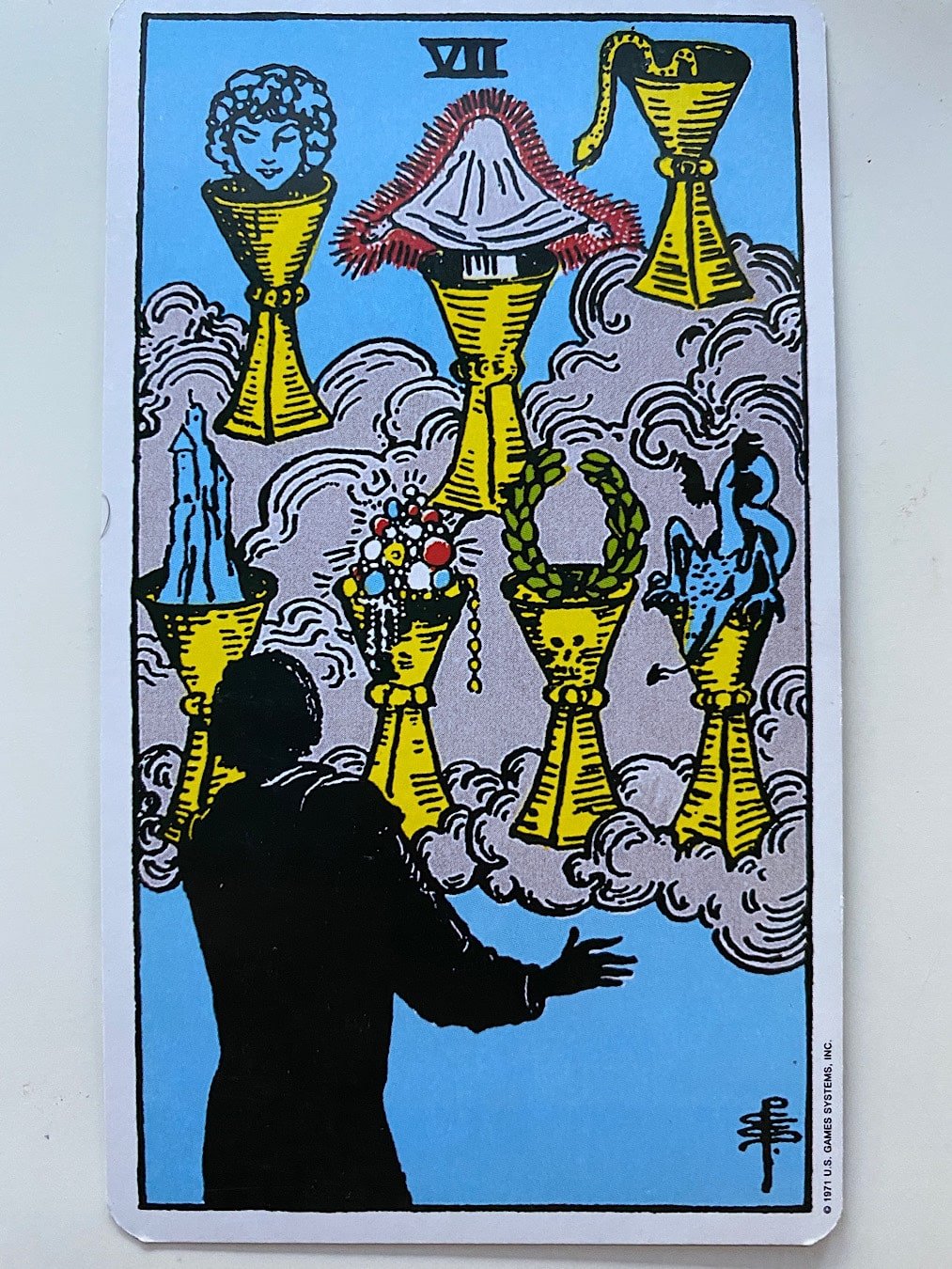 In the RWS we see a shadowy figure gazing up at seven mysterious and fanciful cups in a grey cloud.

On the bottom row are four cups filled with: a castle, jewelry, a laurel (with an ominous skull in the cup, and a dragon.

On the top row we see: a woman’s head, a shrouded figure of mystery, and a snake.

The Seven of Cups is often associated with flights of fantasy and the dangers of an over-active imagination.

It is a card of dreams and possibilities, but because the dreaming figure is covered in shadows, perhaps these dreams are not the most productive.

Perhaps they are idle dreams, mere daydreaming at the expense of positive action.

We see here the dangers of the kind of wishing often seen in New Age concepts like the Law of Attraction, where we wish and dream for riches and success while never taking the positive steps to help determine our own reality.

For this reason, New Thought writers such as Mitch Horowitz eschew the term “manifestation” in favor of “selection.” To select our own reality requires some amount of effort on our part. We cannot just wish to be a successful actor without ever setting foot in the audition room. 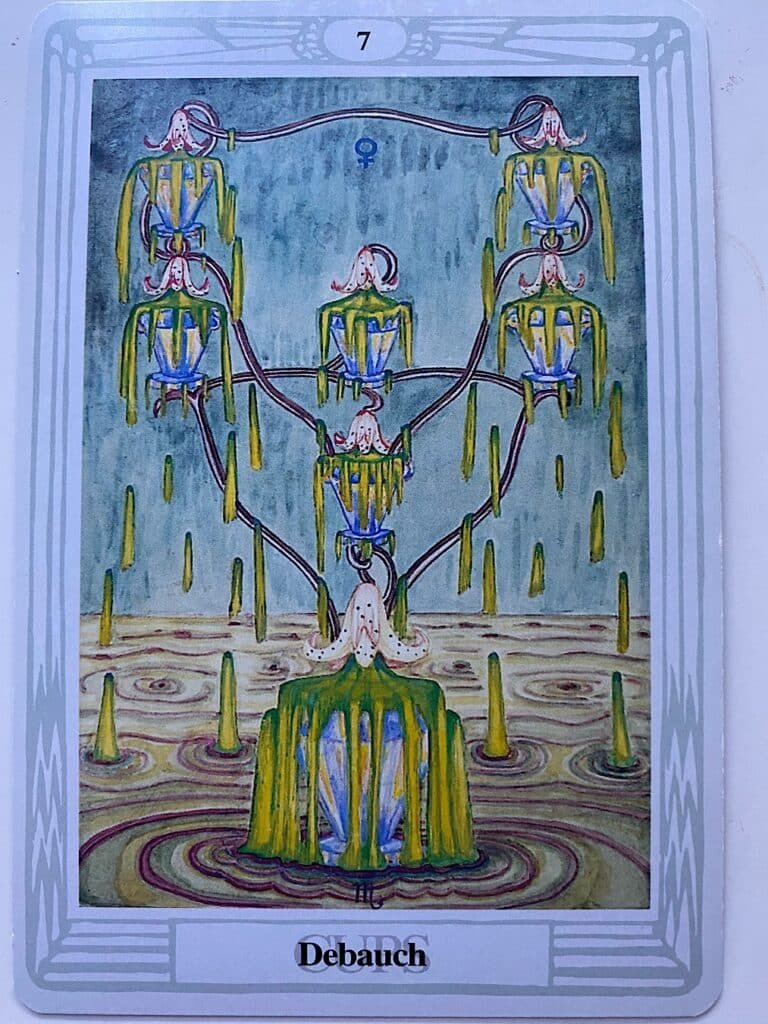 In the Thoth Seven of Cups we see 7 cups oozes with green slime and rotting, decaying vegetation. The name of the card, “Debauch,” implies corruption. The success and balance of the 6 of Cups is now overflowing with disgusting excess.

Overall, this imagery might be related to Crowley’s influence from the Decadence art movement. As Wikipedia describes, it “The movement was characterized by self-disgust, sickness at the world, general skepticism, delight in perversion, and employment of crude humor and a belief in the superiority of human creativity over logic and the natural world”

Crowley always perceives 7, Netzach, ruled by Venus, to be a weak and corrupting influence. Here we see him take that to the extreme with Venus’ influence on the putrefaction of Scorpio.

Instead of the processes of decay leading to life they instead lead to disease.Crowley says, “This card refers to the Seven, Netzach, in the suit of water. Here recurs the invariable weakness arising from lack of balance; also, the card is governed by Venus in Scorpio. Her dignity is not good in this Sign; one is reminded that Venus is the planet of Copper, ‘external splendour and internal corruption.’ The Lotoses have become poisonous, looking like tiger-lilies; and, instead of water, green slime issues from them and overflows, making the Sea a malarious morass.”

When dealing with the Thoth in a modern context we must always recall that Crowley’s opinion of women perhaps influenced his overly negative opinions of the “invariable weakness” of Netzach, ruled by Venus.

But like the 7 of Wands, Venus comes with her own strength, and although we are not in the harmony of Tiphareth or Yesod, there is still a sense of splendour that is feminine strength itself.

A message: “Do not overindulge my Wisdom lest you have too much of a good thing.”

From Book T – The Lord of Illusionary Success

The seven cups are arranged as two descending triangles above a point: a hand, as usual, holds lotus stems which arise from the central lower cup. The hand is above this cup and below the middle one. With the exception of the central lower cup, each is overhung by a lotus flower, but no water falls from these into any of the cups, which are all quite empty. Above and below are the symbols of the Decanate Venus and Scorpio.

Possible victory, but neutralized by the supineness of the person: illusionary success, deception in the moment of apparent victory. Lying, error, promises unfulfilled. Drunkenness, wrath, vanity. Lust, fornication, violence against women, selfish dissipation, deception in love and friendship. Often success gained, but not followed up. Modified as usual by dignity.