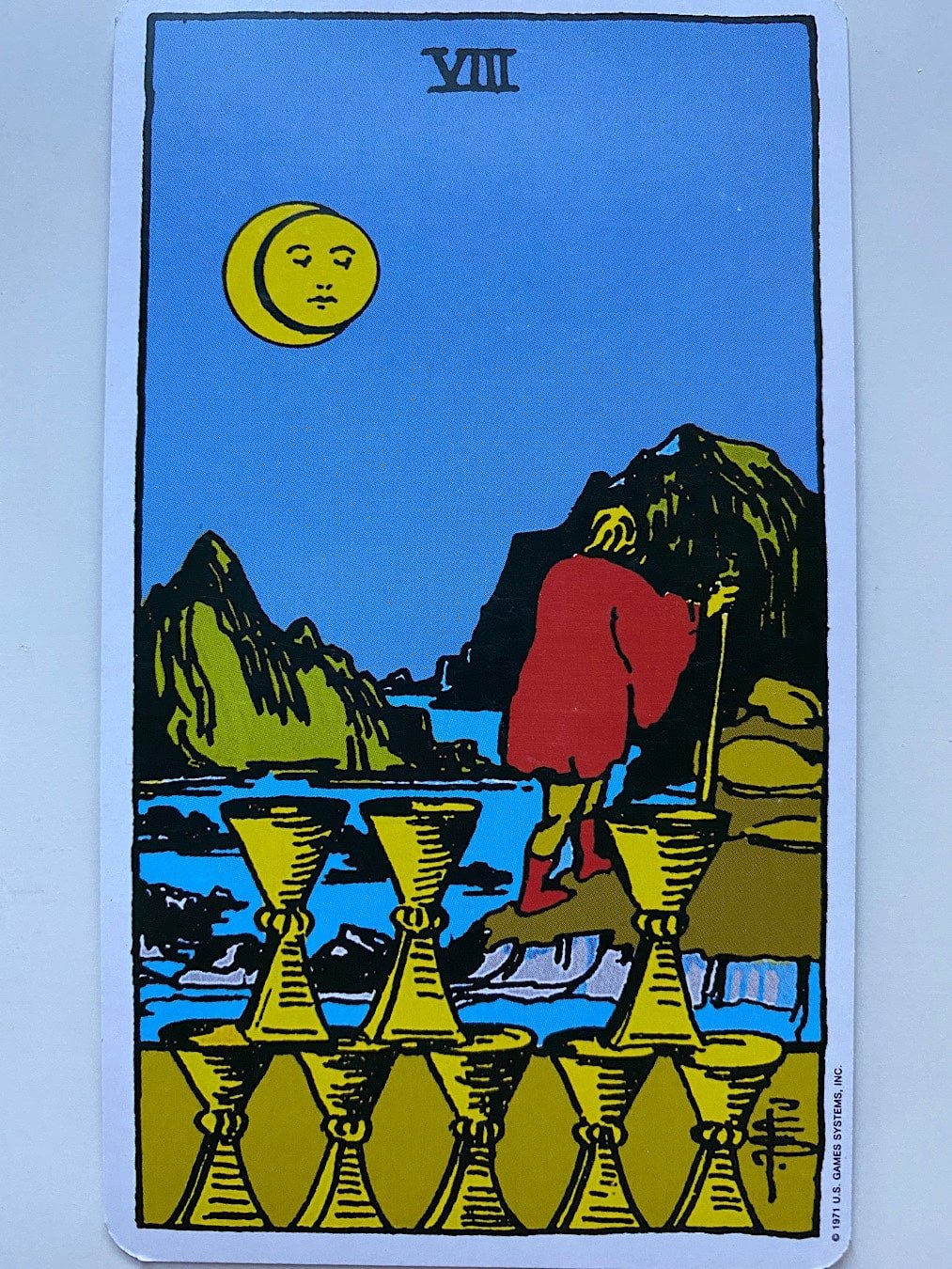 In the RWS we see 8 cups stacked in the front of the card, representing attainment and material satisfaction. Yet the cups are not symmetrically stacked, indicating there is something slightly off about this arrangement.

In the background, under the darkness of a starless night, lit only by the Moon, a man in red sets off into the mountains, along the river of Pisces, to find his Truth.

In the RWS the dark night sky does not have stars, which are symbols of hope and guidance. There is only the Moon, a symbol of mystery, magick, and lunacy. It is saying that he must trust his unconscious if he is to find what he is looking for. But does he even know what he is looking for? He only knows that he is dissatisfied with his current, materialistic life of indulgence.

The river is the same river flowing from the High Priestess’s robes, who is connected with the Moon above his head.

This is a deeply spiritual card, representing dissatisfaction with the material world. The influence of Saturn makes this a heavy burden to bear. Consciousness cannot thrive under such a burden.

In order to find peace, one must find the courage to endure the Dark Night of the Soul and set off on a spiritual journey. The card marks the beginning of an initiation into the Mysteries.

In the RWS Eight of Cups, we can see that the Moon herself has a sorrowful expression, for even Her magick is dim under the weight of Saturn, which makes the dreamy waters of Pisces stagnant. One must set out to find the source of the water, to go upstream, to find the High Priestess, and gain the knowledge one seeks. 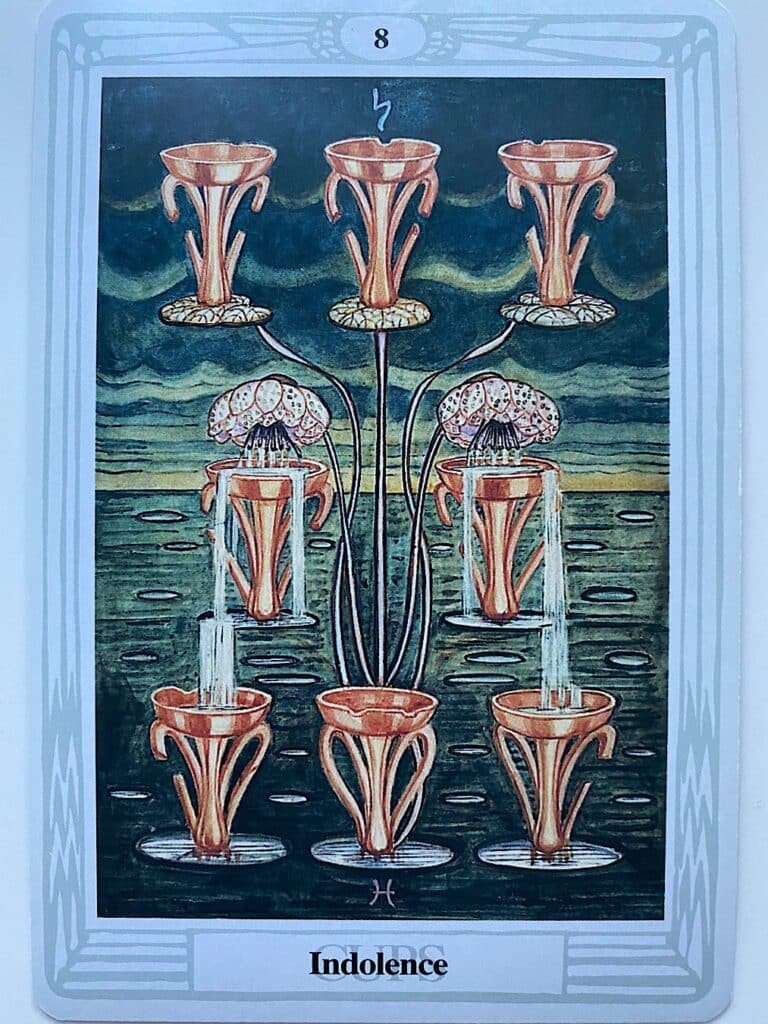 In the Thoth Tarot we see 8 cups. Two putrid-looking Lotuses are pouring water into two of the cups, which then spill over into two more. The rest of the cups are empty. The water is dark, with a stench of death and gloom.

Crowley says, “The Eight, Hod, in the suit of Water, governs this card. It shows the influence of Mercury, but this is overpowered by the reference of the card to Saturn in Pisces. Pisces is calm but stagnant water; and Saturn deadens it completely. Water appears no longer as the Sea but as pools; and there is no florescence in this card as there was in the last. The Lotuses droop for lack of sun and rain, and the soil is poison to them; only two of the stems show blossoms at all. The cups are shallow, old and broken.”

In a strange phrase Crowley also says, “In the psychopathology of The Path, this card is the German Measles of Christian Mysticism.”

I suppose he means that it is a card of spiritual infection and disease.

“Indolence” means a kind of sloth or laziness. But this is meant as a kind of spiritual sloth: the dead waters of Pisces. Living under a materialistic world, your soul seems to drag through the mud and the world lacks any meaning or significance.

As Saturn in Pisces, it’s a limitation of the creative energy of Pisces, like a force pulling you away from the bounty of emotion in front of you and dragging you deeper into the depths of night, guided only by the light of the feminine and mysterious Moon. The effect is that of materiality withering in the face of great spiritual weight. As the Fool, you are thus forced to abandon your harvest and follow the river poured out by the High Priestess, using your intuition as a guide.

From Book T – The Lord of Abandoned Success

A White Radiating Angelic Hand, holding a group of stems of lotuses or waterlilies. There are only two flowers shown, which bend over the two central cups, pouring into them a white water which fills them and runs over into the three lowest, which later are not yet filled. The three uppermost are quite empty.

At the top and bottom of the card are symbols Saturn and Pisces.

Temporary success, but without further results. Thing thrown aside as soon as gained. Not lasting, even in the matter in hand. Indolence in success. Journeying from place to place. Misery and repining without cause. Seeking after riches. Instability.