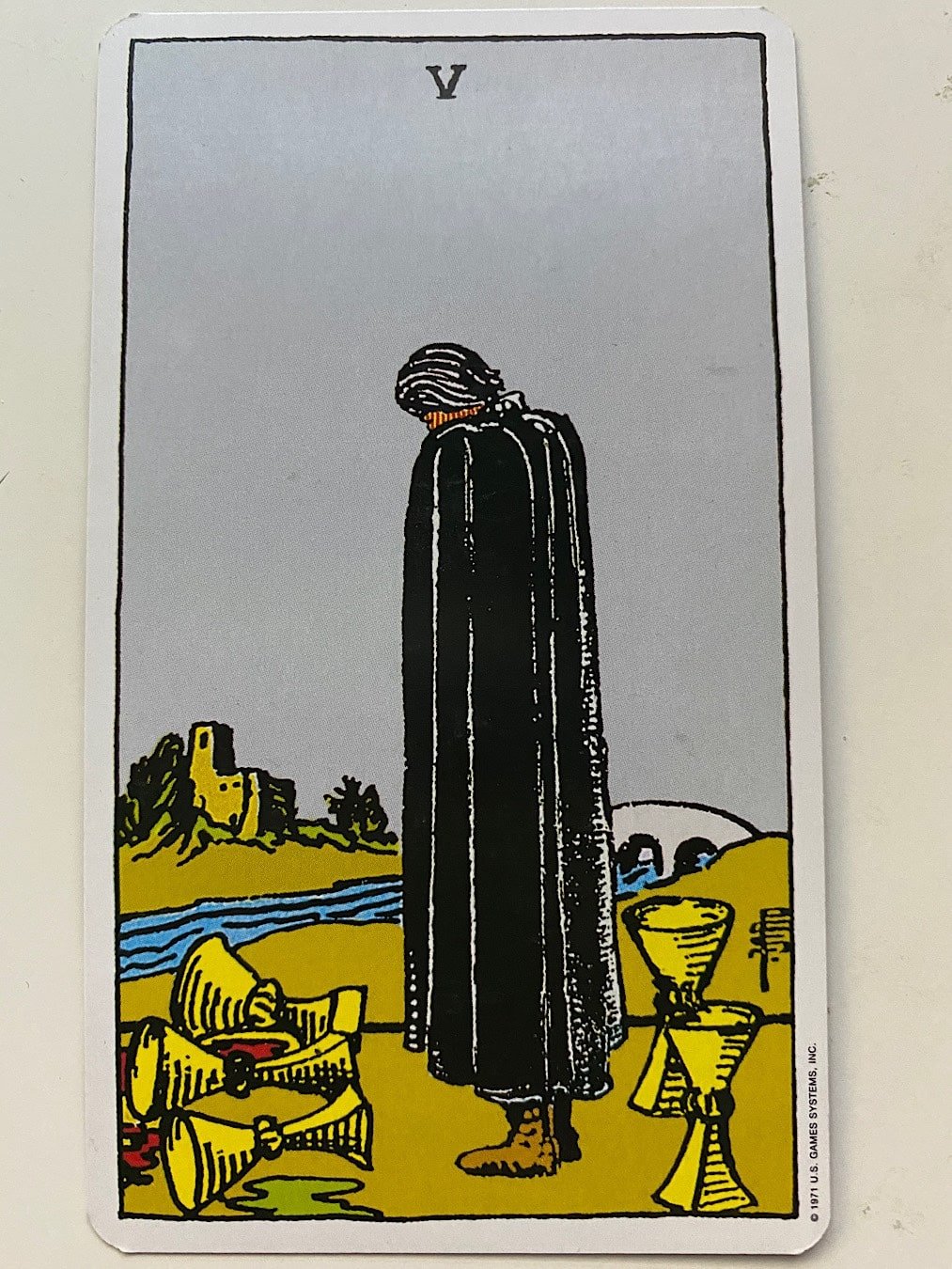 In the RWS, we see a man in a black cloak, looking down at three spilled cups. Two upright cups are behind his back.

There is an overwhelming sense of grief and sadness, a sense of mourning a loss and being unable to move forward with one’s life.

This card is all about gratitude, or rather, what happens when you don’t have gratitude for the cups you have before you and sink into sorrow and disappointment.

Crucially, the man has lost three of his cups but two cups are still available. The lesson is thus: do not cry over spilled milk, especially not when you can turn towards the emotional cups you do have available.

In other words, the Five of Cups tells us to look for the silver lining. It is a warning against perpetual pessimism.

With that said, there is nothing wrong with grieving. Grief is an important emotion and one shouldn’t repress your feelings. Moreover, one cannot necessarily place a “time limit” on when grief is or is not appropriate, especially when it concerns the death of a loved one.

But we need not be so literal in our interpretation of grief. In general, it tells us that dwelling on the past is a recipe for emotional disaster.

From a Stoic perspective, since we cannot control the past, it is better to focus on the present and future, which we do have control over. 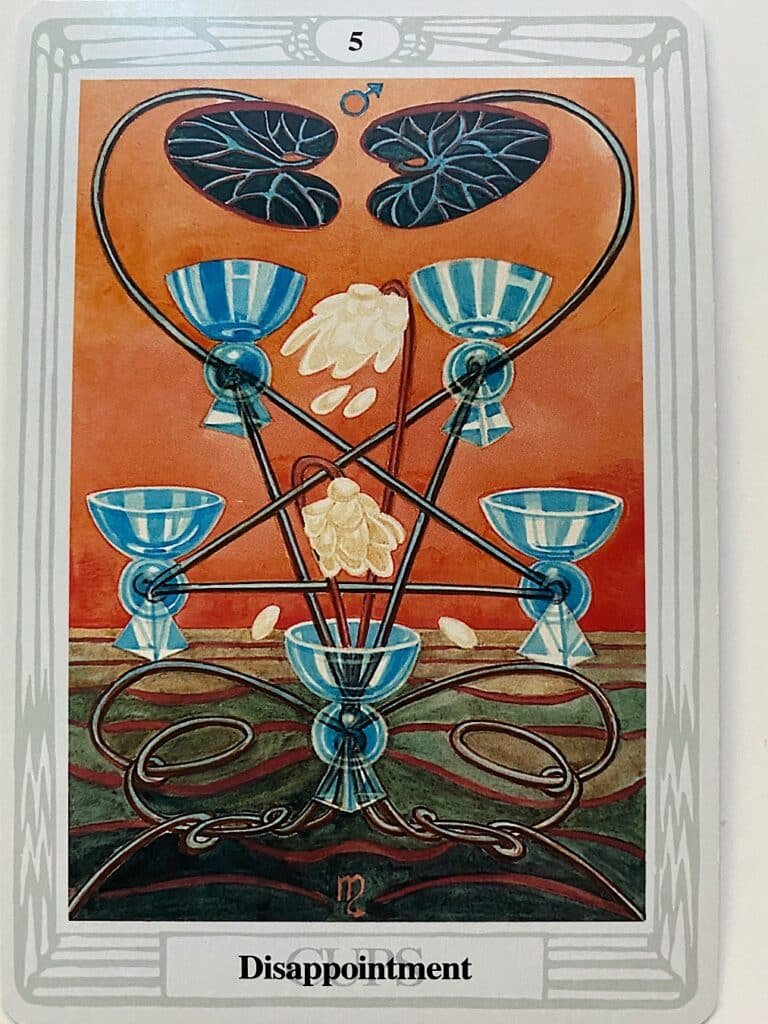 In the Thoth Five of Cups, we see five cups with no water flowing through them. They sit above a blackened and diseased sea, with dying and rotten vegetation.

The cups are arranged in the form of an upside-down pentagram, which Crowley describes as a symbol of “the triumph of matter over spirit.”

Moreover, Crowley says, “The attribution is also to Mars in Scorpio, which is his own house; and Mars is the manifestation on the lowest plane of Geburah, while Scorpio, in its worst aspect, suggests the putrefying power of Water.”

In Qabalah the Five represents Geburah, which is fiery in nature. However, the cups being the suit of water, there is a natural sense of opposition between these contrasting elements. This leads to an overall sense of unease and imbalance.

The sky is red, representing the fiery winds of Geburah, which burn up the flowers and leave a trail of death in their wake.

In the Thoth, the Five of Cups does not have the notion of Silver lining as in the RWS version. But if we situate the Five of Cups in the overall sequence, we know the next step in the path through the Tree of Life is Tiphareth, the harmonious Christ-center.

Thus, there is still hope on the horizon although we cannot feel it as we are lost in the putrefaction of dead Water.

From Book T – The Lord of Loss in Pleasure

A white radiating Angelic Hand, holding lotuses or water-lilies, of which the flowers are falling right and left. Leaves only, and no buds, surmount them. These lotus stems ascend between the cups in the manner of a fountain, but no water flows therefrom; neither is there water in any of the cups, which are somewhat of the shape of the magical instrument of the Zelator Adeptus Minor.

Above and below are the symbols of Mars and Scorpio for the Decan.

Death, or end of pleasure: disappointment, sorrow and loss in those things from which pleasure is expected. Sadness, treachery, deceit; ill-will, detraction; charity and kindness ill requited; all kinds of anxieties and troubles from unsuspected and unexpected sources.

Geburah of HB:H (Disappointment in love, marriage broken off, unkindness of a friend; loss of friendship).