In the RWS we see 8 wands flying through the air.

This swiftness is the energy of Mercury. Related to Mercury is Hermes, the swift god of messages and communication.

It’s also important to notice the direction of the flying wands. They are coming down from the Heavens to the Earth. Thus, the change also represents a process of Fire becoming grounded, like lightning itself flashing through the sky into the Earth. Symbolically, this represents the same direction of emanation and manifestation we see in the Magician, with his gesture of “as above, so below,” redirecting the energy of the gods into the Earth.

It is the contrast between Plato and Aristotle. Heaven and Earth. Macrocosm and microcosm. Regardless, the wands are a symbol of great swiftness and movement. This could be mental energy, as when we get struck by a bolt of inspiration. Or it could be physical energy, representing the changing dynamics of the material world. 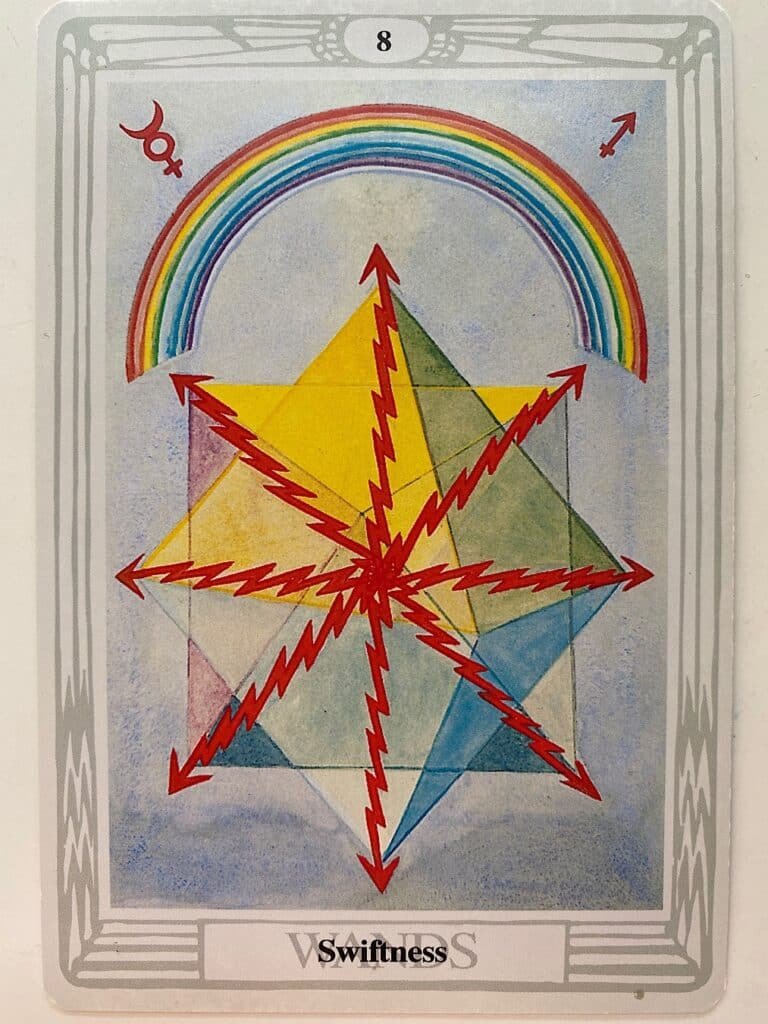 The Arrow of Diana the Huntress shoots through the Veil of the Rainbow, God’s Promise, to reach the Heavens.

Mercury represents the swiftness of communication and thought, materialized in electromagnetism, the essence of Light and the entire visual spectrum.

This card is about human thought in its lightest and most energetic form. One might think of the swiftness of a bolt of lightning or electrons traveling through the giant underwater cables that form that world wide web.

As Crowley says, “The card also refers to Hod, splendour, in the suit of Fire, whence it refers to the phenomena of speech, light, electricity. The pictorial representation of the card shows the Light-wands turned into electrical rays, sustaining or even constituting Matter by their vibrating energy. Above this restored universe shines the rainbow; the division of pure light, which deals with maxima, into the seven colours of the spectrum, which exhibit interplay and correlation. This card, therefore, represents energy of high velocity, such as furnishes the master-key to modern mathematical physics.”

From Book T – The Lord of Swiftness

FOUR White Radiating Angelic Hands (two proceeding from each side) issuant from clouds; clasped in two pairs in the centre with the grip of the First Order. They hold eight wands, crossed four with four. Flames issue from the point of junction. Surmounting the small wands with flames issuing down them, and placed in the centre at the top and bottom of the card respectively, are the symbols of Mercury and Sagittarius for the Decan.