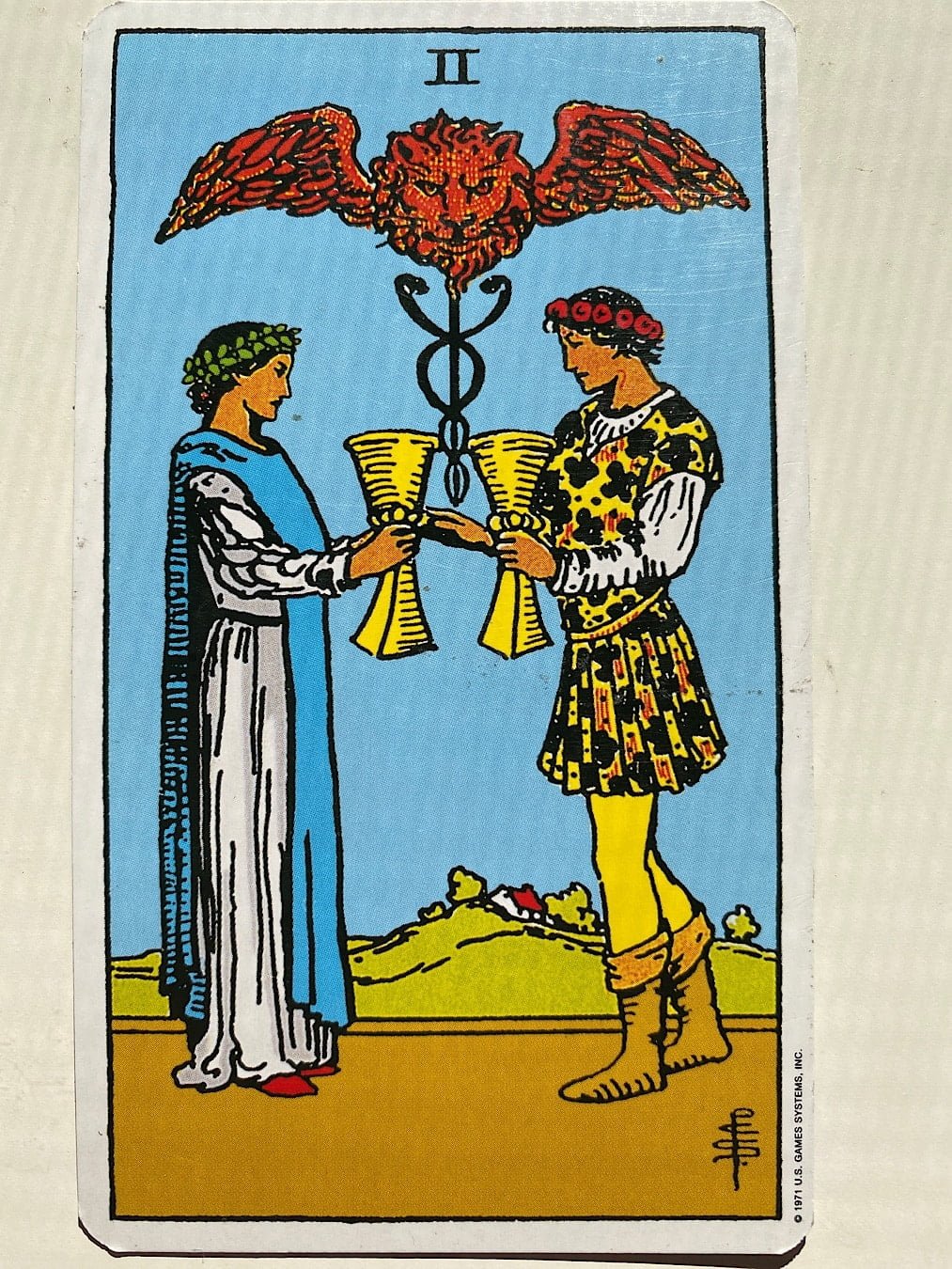 In the RWS Two of Cups we see a man and a woman engaged in what looks like a ritual ceremony, perhaps a wedding or handfasting. They are holding and possibly exchanging two cups. The man is wearing a garment similar to the Fool, which connects to the Two of Cups representing the beginning of the materialization of the Cup sequence after the pure potential of the Ace of Cups.

Above them is a caduceus, the classic symbol of hermeticism. Representing the hermetic principle of as above, so below, the caduceus tells us that the secret to spiritual growth is the reconciliation of opposites. This is the essential equation of the Tarot: +1 + -1 = 0. Positive & Negative, Masculine & Feminine, Left & Right, Top & Bottom, Up & Down, Macrocosm & Microcosm – all of these “opposites” are actually unified and integrated into a greater whole, The One.

Thus, we see the marriage of the man and the woman as a symbol of this dynamic equation of reconciliation and hermetic integration.

As the number Two, it is a symbol of the dyad – the balance of two entities, like two Stars orbiting around each other locked into an eternal dance.

Moreover, the Twos are numbers of harmony and balance and thus, the Two of Cups, concerning our emotional life, is a card of balance between the emotions of two people.

And it might not even mean two people. The man and the woman could represent opposite aspects within our psyches: what Jung called the Animus and Anima, the internal archetypes of the unconscious that representing psychodynamic gender polarity.

The Two of Cups operates as a symbol of the harmonious balance of opposite forces, in this case, masculine and feminine. Together they go through an alchemical process to transform into a more harmonious fusion.

This same concept of equilibrium is extremely important to Hermetic Qabalah and the duality and balance between the two columns of masculine force and feminine form, giving rise to the harmonious Middle Pillar.

Here, gender is less to do with sex and identity and more to do with the energetic flows within our psyche, the balance between active and receptive psychic forces.

Applied to society, the Two of Cups represents the delicate bonds of human sociality and love. 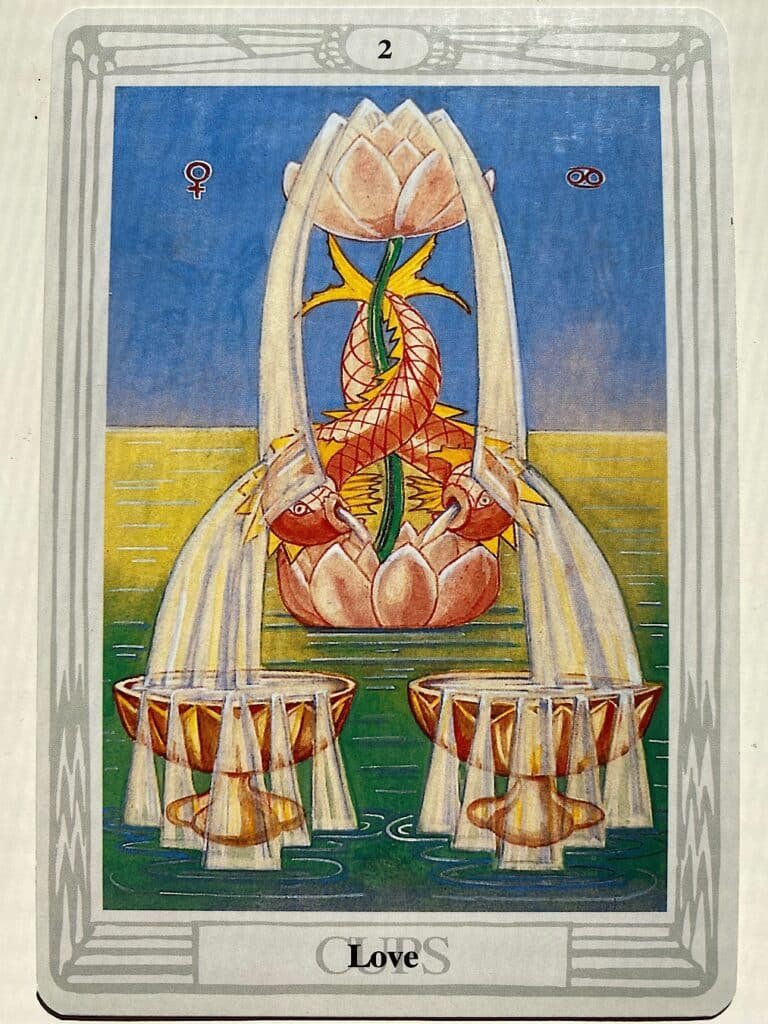 Venus is happy in Cancer, with Cancer representing loyalty, love, romance, and family and Venus representing the feminine element of love – this card is all about love.

In the Waite-Smith deck, the masculine person in the image looks to be wearing a frock much like the Fool, suggesting this card is where the Fool falls in love on his journey.

This card represents the number 2, Chokmah, the sphere of Wisdom, and being in the Cups suits, is positioned in the realm of Briah.

In the Major Arcana, Venus is represented by the Empress, the powerful Mother figure of the Tarot.

Cancer itself represents the Chariot, cardinal water, which is the idea of the crab carrying her home everywhere she goes. Cancer is ruled by the moon.

“The Two always represents the Word and the Will. It is the first manifestation. Therefore, in the suit of Water, it must refer to love, which recovers unity from dividuality by mutual annihilation.” (Book of Thoth)

Two of Cups, or, Love. Venus in Cancer represents the pure manifestation of Love. It is the perfect balance and negation of the gender binary, the active and the passive, becoming the same winged egg (Zero) in the Magus. Venus is romanticism made sensate in the moving home that is the shell of Cancer, the crab, the doubly articulated creature of manifestation.

The watery depths of the Cups find their Divine Form in the Two, which is itself the Sphere of Wisdom.

If you see this card, look within yourself for the self-love that only comes from proper and gentle balance between all aspects of your psyche.

From Book T – The Lord of Love